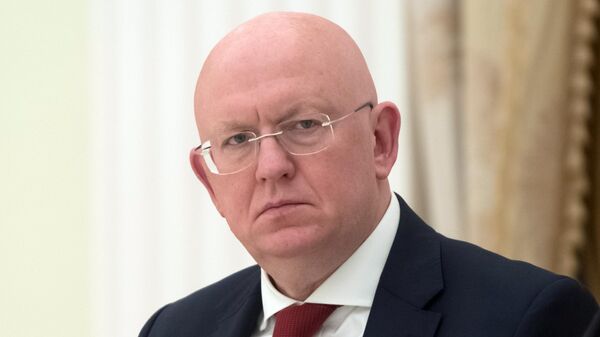 Ukraine itself has paved the way for the referendum on the reunification of Crimea and Russia in 2014, said the Russian Ambassador to the UN, Vasily Nebenzia at the meeting of the security Council at the Arria formula.

The meeting was devoted to the situation in the Crimea. Meeting of the Arria formula does not relate directly to the activities of the Security Council and involve consultations, which can invite not only diplomats, but also representatives of non-governmental organizations and the public.

During the meeting, a number of Western representatives, including permanent representatives of Germany, France, the Czech Republic again accused Russia of the annexation of Crimea.

“Unfortunately, Ukrainians have nobody to blame but themselves, because they paved the way for this referendum in 2014,” he added.

The permanent representative recalled that the guarantors of the agreement, which was signed by the former President of Ukraine Viktor Yanukovych and the opposition, were the foreign Ministers of Germany, France and Poland. “And these guarantees have been violated on the next day the opposition, which had just seized power in Kiev and forced the President to flee, because he was a threat to his life,” — said Nebenzia.

Speaking via video link the inhabitants of the Crimea noted that their rights are respected on the Peninsula, moreover, some of them said that they live better now than when the Ukrainian government. The Crimeans said that life with Russia was their conscious choice.

Participated in the meeting, the permanent representative of Germany to the UN, Christoph Heusgen in turn, said that “there is international law, the UN Charter, the Council of Europe, the Venice Commission”.

“International courts make decisions that people sometimes don’t like. One of you said that I had to be in the Crimea during the referendum and look into the eyes of the people who voted. You may be right, and you had a right to it. But if we live in this world and won’t respect international law, we will not abide by the UN Charter, to obey the Constitution States, the world is waiting for a disaster. So my appeal is to respect international law, respect the Constitution,” said Heusgen responding to the words of one of the Crimean residents who said that the inhabitants of the Peninsula had the right to choose their destiny.

“It turns out if one crosses the road at a red light, and then the second goes after him and a policeman stops him, the latter asks: “what are you arresting me? You’ve missed the other.” International law is not working,” said Heusgen.

Russia’s permanent representative to the UN responded to the remark of the German colleagues.

Crimea became a Russian region after held there in March 2014 referendum in which 96.77% of voters of the Republic of Crimea and 95.6% of residents of Sevastopol voted for joining Russia. Crimean authorities held a referendum after a coup in Ukraine in February 2014. Ukraine still considers Crimea its but temporarily occupied territory. The Russian leadership has repeatedly stated that the inhabitants of Crimea democratically in full compliance with international law and the UN Charter voted for reunification with Russia. According to Russian President Vladimir Putin, the Crimea issue “is closed permanently.”