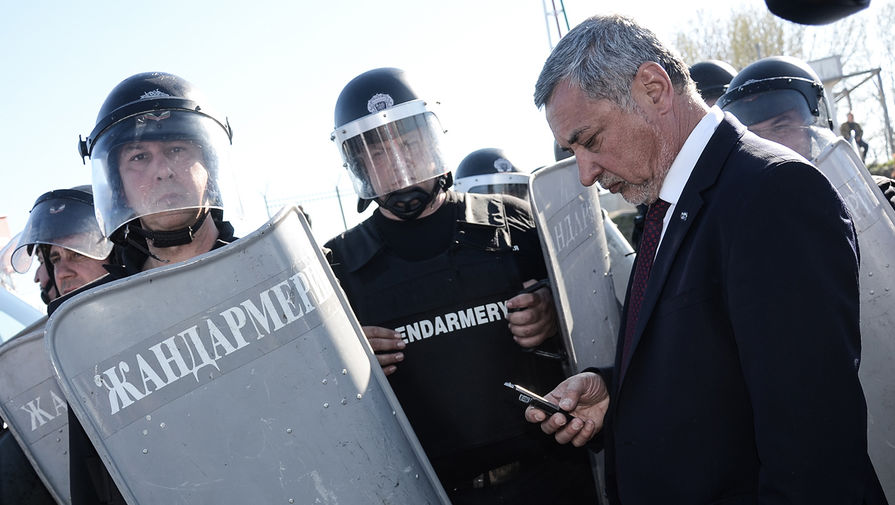 The Bulgarian Parliament adopted a Declaration against the intention of Kiev to split Bolgrad district of Odessa region into five administrative units, because, according to Sofia, this is a blow to the local Bulgarian community. Kiev warned Sophia against interference in the internal Affairs of Ukraine. Deputy of the Parliament of Bulgaria Valeri Simeonov threatened that his country will block Ukraine’s path to NATO.

The Bulgarian Parliament has opposed territorial reform in the Odessa region, calling it a very bad news for the local Bulgarian community, and threatened to block the path of Ukraine into NATO.

In Parliament said that this change will strike at the Bulgarian community and can lead to “smearing”. In this regard, the Bulgarian MPs pointed out that Ukraine intends to breach its obligations under international agreements.

In the end, the National Assembly of Bulgaria adopted a Declaration against the administrative-territorial reform, providing for the separation of Bolgrad district five administrative units.

Document to protect the integrity of the Bulgarian community in Ukraine that existed in Bessarabia from the XVIII century, was supported by 109 MPs, nobody voted against, 19 abstained, according to the Bulgarian portal Fakti.

“The support of Bulgaria for the accession of Ukraine to the European Union and NATO have been called into question, since Kiev violates the European Charter of local self-government and the framework Convention of the Council of Europe,” warned the Deputy Chairman of the Bulgarian Parliament Valery Simeonov.

Moreover, during the meeting, he drew attention of deputies that such fragmentation is somehow not possible in other regions of Ukraine. The speaker of the National Assembly of Color Karankawa after the vote, said that the Declaration will be immediately sent to the Embassy of Ukraine in Sofia.

“From the beginning of the discussion of administrative-territorial reform in Ukraine, the foreign Ministry’s position has been consistent and categorical: we insist on maintaining the integrity of the Bolgradsky region in its present borders in accordance with the wishes of the Bulgarian community.

The Ministers agreed to maintain contact until, until you find an acceptable solution,” — said in comments the Ministry of foreign Affairs of Bulgaria.

Meanwhile, on its website, Ukraine’s foreign Ministry posted a communiqué, which expressed indignation at the fact that the Bulgarian Parliament adopted a Declaration on Ukraine’s domestic policy.

“The issues of the administrative-territorial structure of Ukraine are within the exclusive competence of public authorities of the country. Attempts by foreign States to interfere in the internal Affairs of Ukraine for us is completely unacceptable. It is surprising and misunderstanding of manipulative false claims about the impact of the reforms on the national identity of ethnic Bulgarians of Ukraine”, — said in Kiev.

Ukraine in its internal policies against the Bulgarians gained another external enemy in Europe, IA Regnum quotes the words of political scientist Sergey Belasco.

“Now we can expect anti-Bulgarian campaign in the Ukrainian media, as well as friendly performances of “Patriotic public”. By the way, the transit of gas to the South of Ukraine, going through Bulgaria. And Sofia is only waiting for the excuse to abandon anti-Russian sanctions”, — the expert reminded.

In 2017 Ukraine entered into force the law “On education”. It was opposed by Hungary: on the territory of Ukrainian regions live 150 thousand ethnic Hungarians. Budapest considered the new law violates the rights of the Hungarian minority.

The head of the Ministry of foreign Affairs of Hungary Peter Siyyarto called the condition, without which Ukraine can not join NATO. He noted that the Ukrainian side must restore the right to study in their native language for the Hungarian minority.

Soon Kiev adopted a clarification article to this law, and Kuleba during the meeting with the Ambassador of Hungary in Ukraine istván Idart assured that now the law of the General Hungarian population of Ukraine, without prejudice to his rights in the language.

The Ukrainian foreign Ministry said Kiev hopes that Hungary will unlock the dialogue with the Ukrainian side with NATO at a high level. The Ministry said that Ukraine has fulfilled all the recommendations of the Venice Commission.

In March of this year, Russian foreign Minister Sergei Lavrov said that Moscow and Budapest stand for ensuring the rights of national minorities in Ukraine. Including Kiev is obliged to comply with their linguistic and educational rights, said the Minister after talks with péter Szijjártó.

“This is required by international obligations of the Ukrainian state, as, indeed, the Constitution of Ukraine”, — said the head of the Russian foreign Ministry.

As for Ukraine’s desire to join the EU in may of this year it became known that the European Union intends to define a new long-term goals for the program “Eastern partnership”.

This program focuses on the development of relations of Brussels with six former Soviet countries: Ukraine, Moldova, Georgia, Belarus, Armenia and Azerbaijan. The countries of old Europe are not satisfied with the use of language that allows the former Soviet republics to think that participation in the program is the path to EU membership.

The EU hopes that the summit “will be a mandate for preparatory work” to define the “next generation goals” for the period after 2020.

The overall vector policy in the EU, in fact, already identified. The document notes that participation in “Eastern partnership” is not a road to EU membership, as it is commonly understood in Ukraine and in Georgia. Eastern partnership — a tool of political and economic integration of the European Union with the countries of the former USSR.

Trump to prevent COVID-19 drinking hydroxychloroquine, from the use which warn doctors

“The mistakes of the past”: the EU appreciated the plan of Him and Merkel