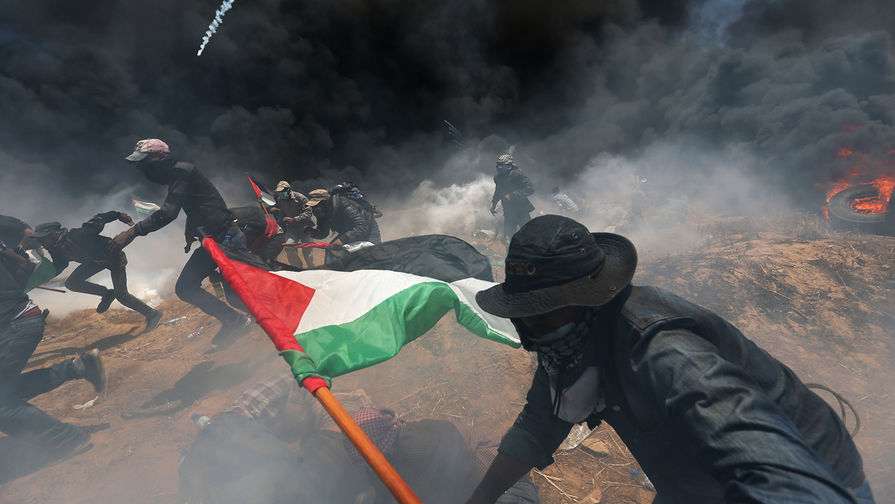 Representatives of Russia, USA, EU and the UN for the videoconference discussed erupted with new force the conflict between Israel and Palestine. The recent decision last to refuse all agreements with tel Aviv and Washington created a dangerous tension in the region. While diplomatic Palestinian move was a response to Israel’s intention to Annex their territories.

Russia participated in a videoconference, special representatives of the “middle East Quartet” — format with the participation of Russia, the US, the EU and the UN, created to resolve the Arab-Israeli conflict. Moscow was represented by Deputy Minister of foreign Affairs of Russia Sergey Vershinin, according to the website of the foreign Ministry.

“Examined the current state of Affairs in Palestinian-Israeli settlement in the context of finding ways of reviving the peace process”, — stated in the message of the foreign Ministry.

However, other details of the discussion, the foreign Ministry does not.

It is known that on the eve of the videoconference, on Thursday, the special envoy of the Russian President for the Middle East Mikhail Bogdanov spoke with the chargé d’affaires of Israel in Moscow, Eli Belotserkovsky, to inform him about the planned discussion.

Then Russia Israel confirmed its commitment to facilitate an international conference involving the Quartet, several Arab countries and the Palestinians.

A teleconference of the Quartet for middle East settlement took place against the background of worsening relations between Palestine and Israel, which resulted in a number of unfriendly steps by the Jewish state.

Israeli Prime Minister Benjamin Netanyahu may 17, called to impose Israeli sovereignty on the part of the West Bank of the Jordan river, which belong to Palestine. The area features a number of Jewish settlements, but they are not part of Israel from the point of view of international law. Moreover, their status is not so obvious even from the point of view of internal Israeli law.

Netanyahu decided to fix this point with the de facto annexation of these territories, although the UN security Council in 2016, called on the Israeli authorities to end its occupation of the West Bank.

“Here’s the truth: these areas are the place where the Jewish people appeared and developed. It’s time to distribute [them] Israeli sovereignty and to write another glorious Chapter in the history of Zionism”, — declared Prime Minister of Israel.

Such actions negatively perceived in Palestine. The head of state Mahmoud Abbas announced the termination of all agreements and arrangements with Israel and the United States.

Washington got under “a hot hand” the Palestinian authority is not accidental, but for the creation of the so-called “deal of the century” to resolve the conflict between Israel and Palestine.

The U.S. in January presented his plan to resolve the Israeli-Palestinian contradictions that can’t come to an agreement over half a century. International mediators have repeatedly tried to offer its own solution to the conflict, but no result is not given. Washington also spent on creating a “deal of the century” for almost three years, releasing a proposal with a strong bias in favor of Israel.

So, it is important for both countries the city of Jerusalem, the US proposed to declare undivided capital of the Jewish state, to acknowledge the Israeli settlements on the West Bank of the Jordan river, and to disarm Hamas — a Palestinian movement operating in the Gaza strip for the demilitarization of the region.

This situation is the Palestinian authority are not satisfied, despite the assurances of the American side about the increase of their territories several times.

Jerusalem Palestinians to give Israel does not intend in any case, considering the Eastern part of the city as their capital. And in relation to the territories on the West Bank of the Jordan river, the position of Palestine is quite hard.

“The United States to recognize Jerusalem as the capital of Israel and moved their Embassy, they published a “deal of the century” which laid the groundwork for its annexation of the Israeli declarations,” said Abbas during his announcement of the termination of cooperation with Washington.

American authorities are responsible for the oppression of the Palestinian people, stressed the head of Palestine, Washington’s main ally “occupation government” of Israel.

In such circumstances, the Palestinian authorities have requested the support of the international community, in particular, Abbas urged Russia to help resolve the Palestinian-Israeli conflict through the organization of a conference in Moscow.

One of the main problems of the “deal of the century”, which is not just celebrated in Palestine, became virtually complete disregard of the Palestinians from the United States. Any discussion in the plan was carried out with Israel, even the presentation of the agreement was conducted by the President of the United States Donald trump along with Netanyahu.