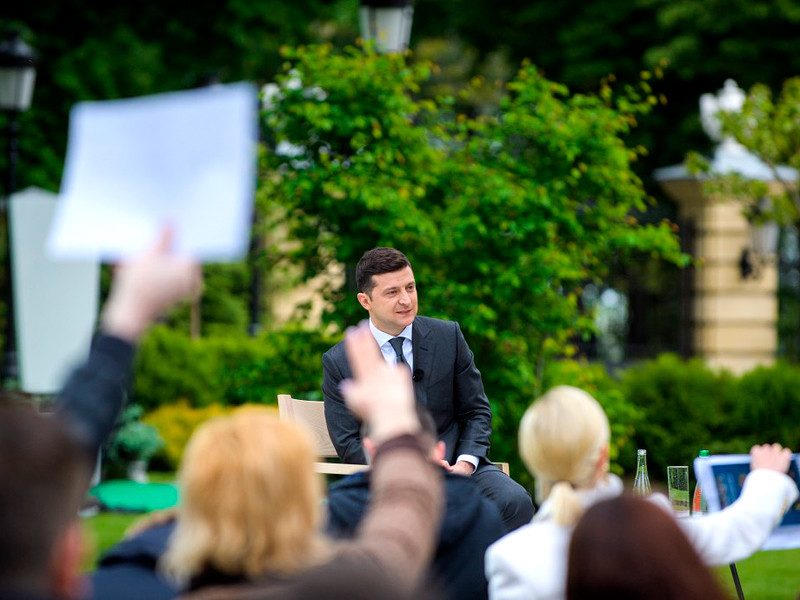 The alleged negotiations of ex-President of Ukraine Petro Poroshenko with the ex-Vice President of the United States Joe Biden about the dismissal of the Prosecutor General of Ukraine in exchange for loan guarantees can be qualified as treason. This was stated by acting head of state Vladimir Zelensky at a press conference in honor of the anniversary of his inauguration.

“About Poroshenko and Biden, yeah, I heard, I will comment. I think this is not last call, which will be Ukrainians. […] I know that it can be perceived, qualified as treason,” – said Vladimir Zelensky.

He stressed that to solve the issue of the fault of Poroshenko will be the court after the investigation, reports “Ukrainian truth”. “As regards the sentence Poroshenko: I’m sure this and sure that everything is still ahead… I think they ran the country, what awaits them are a lot of different adventures and different sentences,” – said the President of Ukraine.

Earlier, the Ukrainian media reported that the Prosecutor General’s office of Ukraine launched an investigation under the article of treason after the publication of may 19, the people’s Deputy of Ukraine Andriy Derkach of recordings which may indicate the impact of Biden on domestic policy of the country. They voice, presumably belonging to Biden, Poroshenko and former U.S. Secretary of state John Kerry, discussing the resignation of Prosecutor General Viktor Shokin investigating the case Biden’s son, in exchange for loan guarantees for a billion dollars. The record, according to Derkach, was made by Poroshenko in 2015. To the Deputy of the footage came from investigative journalists.

The MP noted that the first topic of records for receiving ” $ 1 billion in exchange for saving schemes “Burisma” and international corruption”. The second theme of the records, as told Derkach, concerns the collapse of the coalition and elections in February 2016. Also, according to him, in the recordings we are talking about the impact of Biden on the Ukrainian authorities via Supervisory boards of large SOEs.

These materials gave the Deputy the office of the attorney General, after which the Department opened a criminal case under part 1 of article 111 (high treason) and part 2 St. 364 (abuse of power) of the criminal code of Ukraine. About it “Interfax” was told in the press service of the Prosecutor General.

In turn, the party of “European solidarity”, led by Poroshenko, stated that the published “audio items fabricated for the sake of discrediting Ukraine and the artificial involvement in the American electoral campaign.”

Surrounded by Poroshenko added that one of the objectives of the press conference Derkach is “lobbying for the interests of oligarch Kolomoisky”, saying that “obviously PrivatBank is the reward for participating in this Russian provocation.”