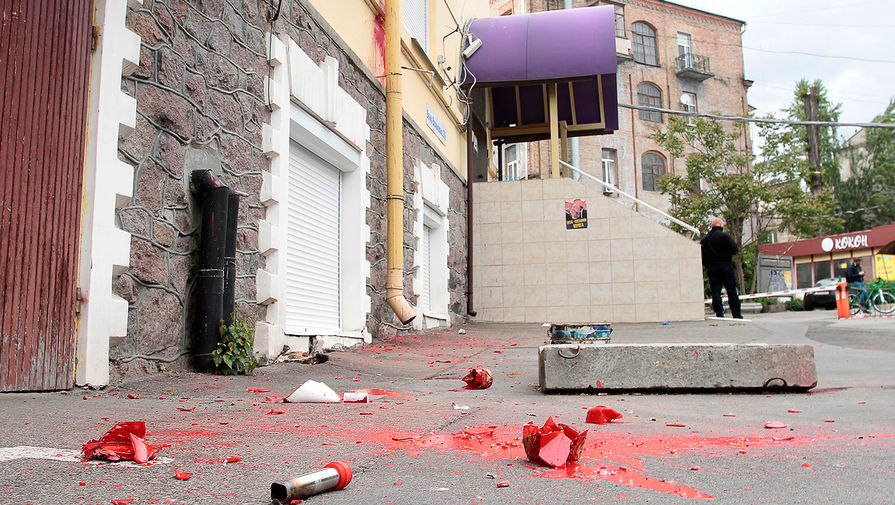 Ukrainian nationalists burned flares, smoke bombs at the office of the Chairman of political Council of party “Oppositional platform For life” Viktor Medvedchuk. In addition, the troublemakers pelted the building with cans of paint and firecrackers. Activists detained and opened a criminal case. According to the party, there is one victim from among the security office’s policy.

Kyiv police have detained several people for rioting at the office of the Chairman of political Council of party “Oppositional platform For life” (opzz) of Viktor Medvedchuk, the press service of the Metropolitan police Department.

“Took action, “activists” lit flares. Only for violation of public order was arrested about 19 people, now they are in the Pechersk police Department,” — said in comments to the Agency UKRINFORM. Clarifies that law enforcement officers find out circumstances of the incident.

Earlier, the Ukrainian media, in particular 24 channel reported that near the office Medvedchuk explosion. Witnesses, in turn, told me that he had heard nationalist slogans. Police later denied reports about the explosion, reports RIA “Novosti”.

“Indeed, in the city center took action, during which activists lit flares. The victims yet, in any case, such information is not received”, — told the Agency the communications division of the police of Kiev.

Later it became known that the Ukrainian law enforcement authorities opened a criminal case in connection with the protests of the radicals.

“For Commission of hooligan actions during a rally in the capital Pechersk initiated criminal proceedings. Law enforcement authorities brought 17 people to the Pechersk police Department, which also sets out their personal details and take notes. After testing, the actions of each will be given a legal assessment”, — stated in the message on the police website.

Law enforcement officers of Ukraine said that the protesters burned flares, smoke bombs and threw firecrackers and cans of red paint pelted the facade of the building. Police said that the incident qualified as hooliganism. Guilty could face up to four years of imprisonment.

Meanwhile, political party “national case” admitted that he is the promoter of this promotion. Alleged members of the party decided to oppose the visits of the deputies from opsi for talks in Russia.

According to the press service of Medvedchuk, the police detained 11 people, who were guarding the office and let the illegal actions of the nationalists. One of the guards was injured. “One man got hit in the head, an ambulance arrived, 11 security guards of the office were detained by police after they tried to stop the radicals”, — quotes RIA “news” words a press-the Secretary of Medvedchuk, Oleg Babin.

He added that the radicals were detained only after they got someone from the police. According to Babina, the party is preparing a special statement on the incident.

In particular, the party, the actions of the radicals interpreted as bullying because of the political position of the party.

“This attack on the office is an attempt of revenge and intimidation for the principled position of our party concerning the external management of Ukraine from the United States of America, the attempt to intimidate supporters of our party, who on may 9, contrary to the position of power, a large-scale celebrated the Day of Victory in the great Patriotic war of 1941-1945, demonstrating that the national-radicals and the ideological heirs of fascism will not be defeated by our people,” — said on the official website opsi.

It was stressed that a change of government not change the situation with attacks on the party. “Attacks that were the norm under the regime of [former President of Ukraine Petro] Poroshenko, continue with [current head of state Vladimir] Zelensky”, — stated in the message.

Earlier, the Ukrainian politician Viktor Medvedchuk urged the authorities to propose a plan of “elimination of illegal influence of the United States the policy of the state”. “The Ukrainian government led by President Zelensky, who according to the Constitution of Ukraine is headed by the Council of national security and defence, must in the shortest possible time to propose a plan to radically remove the illegal influence of the United States of America on domestic and foreign policy of our state”, — quotes the website of the party.

Thus he responded to the recent unveiling of a telephone conversation Poroshenko and us officials.