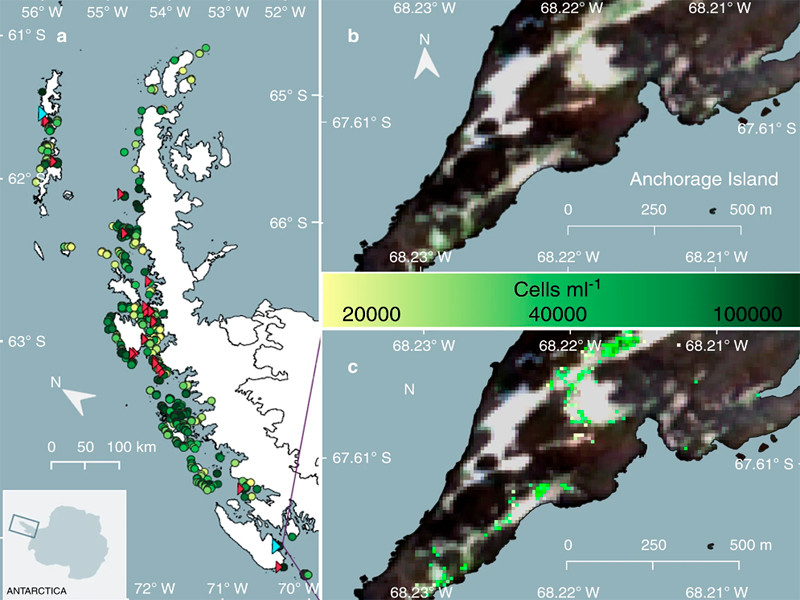 British scientists have created the first ever large-scale map of the spread of microscopic algae, which bloomed on the surface of the snow along the coast of the Antarctic Peninsula in the previous three years. The results show that this “green snow” can spread with increasing global temperatures, according to the website of the University of Cambridge.

The group, which included researchers from the University of Cambridge and the British Antarctic service, combined the satellite data with ground-based observations in the Antarctic for the detection and measurement of areas of areas which are blooming and green snow algae. Although each individual Alga is microscopic, together they paint the snow in a bright green color and can be seen from space. A study published in the journal Nature Communications.

“This is a significant progress in our understanding of life on land in Antarctica and how it may change in the coming years when the climate will become warmer,’ said the doctor, Matt Davey from Cambridge University, who led the study. Snow algae are a key component of the ability of the continent to capture carbon dioxide from the atmosphere through photosynthesis”.

Flowering green snow algae found along the coastline of Antarctica, especially on the Islands along the Western coast of the Antarctic Peninsula. They grow in “warmer” areas, where average temperatures slightly above zero degrees Celsius from November to February – summer season in the southern hemisphere. The Peninsula is part of Antarctica who survived the most rapid warming in the second half of the last century.

The researchers found that the distribution of green snow algae also strongly influenced by marine birds and mammals feces which act as a very nutritious natural fertilizer to accelerate their growth. More than 60% of territories with “green snow” found 5 km from the penguin colony. Also the growth of algae is observed near the nesting sites of other birds, including Skuas, and areas where seals come ashore.

The team of researchers used satellite imagery Sentinel-2 the European space Agency taken in the period between 2017 and 2019, and combined them with the results they got in the Ryder Bay on the island of Adelheid and on the Fildes Peninsula on king island-George clarified on the website of the British Antarctic service.

Almost two-thirds of the colonies of blooming of green algae accounted for a small low-lying island with no hills. As soon as the Antarctic Peninsula heats up due to global temperature increase, these Islands can lose their summer snow cover, and with it the snow algae.

“We found 1679 individual spots of green algae blooming on the surface of the snow, which together occupied an area of 1.9 km2, which is equivalent to the absorption of about 479 tons of carbon per year,” said Dr. Davey. This amount of carbon corresponds to the emissions of this substance at 875 thousand trips to the petrol car in the UK.

The researchers say that the total amount of carbon held in the snow algae of the Antarctic is likely to be a lot more, because carbon dioxide is also absorbed by other red and orange algae. They plan further work to assess algae bloom all over Antarctica, using data from ground-based observations and satellite imagery.

We will remind, in February 2020 snow cover in the vicinity of the Ukrainian base “Akademik Vernadsky” located on the island of Galindez near the Antarctic Peninsula, became crimson. It is the cause was caused by a watermelon snow (Chlamydomonas nivalis) is a species of unicellular green algae, who are not afraid of extreme temperatures and stored in the snow during the long winter. When weather conditions become favorable, they begin to bloom.