The most interesting discovery has been accomplished by the members of the military search party “Mius-front” in the Rostov region. During the next expedition they found in the land of the safe, apparently buried in the beginning of the great Patriotic war. I suppose that it may be the documents of one of the divisions defending the Germans from the approaches to Rostov-on-don in the autumn of 1941, and in addition the values of the state Bank of the USSR. 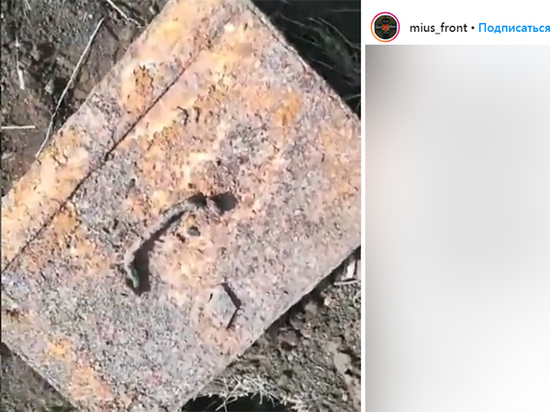 Such successes are the search engines not often. Conducting excavations on the battlefield in 1941, members of the order ran in one of the holes on the large metal box and raised it to the surface. Upon closer inspection, it turned out to be Hiking Deposit box prewar output. The iron box is locked and to open it up yet. However, the appearance of the safe gives reason now to assume that the inside could survive until our time some documents.

Commander Andrey Kudryakov who is familiar with the situation emerging on this front in the autumn of 1941, suggested that metal box, most likely belonged to the staff of the 339 th infantry division defending the approaches to Rostov-na-Donu: “Presumably, the box was abandoned in October 1941, when the division made its way out of encirclement.” Search engines allow a fairly high probability that they discovered the safe can be a list of parts division, operativnye orders, sekretnye documents. And the values 792-th field offices of the state Bank of the USSR.

If these assumptions are true, you may be able to reveal some secrets of the great Patriotic war. In particular, to know the fate of many soldiers and commanders who fought in the beginning of the war in 339 th division, the place of the death are still not known. This is especially important to residents of the southern regions of Russia. After all, the division in which there were about 13 thousand people, hastily formed in the beginning of the war on a territorial basis – of the residents of Rostov, Taganrog, Salsk, Novocherkassk… In heavy defensive battles near Rostov in the autumn of 1941, the two regiments of the division were surrounded and were almost completely destroyed.

Found safe searchers “Mius-front” handed over to the military, which began preparations for opening the metal structure. To make it be very careful and in certain climatic conditions to avoid damage to paper artifacts, perhaps on the inside.

Although rare, but findings like this have happened before.

For example, in the fall of 2015 fighters of one of the search teams dug in Oleninskaya district of Tver oblast in the environs of the village perished Boryatino a safe with documents and personal Affairs of the red army. This metal box was buried in 1942 during the retreat of parts of the 22-th army, which fought bloody battles in the area.

On the approximate location of the caches of the search engines have helped to reach one of the soldiers, who were instructed to bury the box. It happened after July 3, 1942, when commanders realized that you have to get out of the environment, and there was a possibility that the staff documents fall into enemy hands. Veteran survived the war, and many years later from memory drew a diagram, marking where and what signs to look for this treasure. Subsequently, the scheme fell to the leader of the search team. Not all the time, but enthusiasts of the search engines managed to get to the safe.

The box was buried at a depth of about half a meter. Were in the paper for decades soaked with moisture, but, according to experts, using modern technologies of restoration of at least three quarters of them can be read. Apparently, “boryatinskoe” safe preserved documents 380 th infantry division, which participated in the infamous battle of Rzhev, and in July 1942 were surrounded, combat logs, data loss, personal files of soldiers, the cards… It is in the vicinity of the village of Boryatino the headquarters of one of the regiments of this division.

By the way, according to search engines the information somewhere in the same area was buried in 1942, and another one with a safe with documents of military units that were part of the 22-th army.

Prior to that, like “safe” the find was made in the Tver region in the middle of “zero” in Bielsko district of the searchers of the land of metal staff box the 53rd infantry division.

And in may 2018, a similar finding has pleased the search engines in the Novgorod region. They managed to dig up a safe belonging to one of military units involved in Luban surgery, and was buried in 1942 in the area of the Small village Zamoshie.

Another safe with documents of the great Patriotic war was discovered in the quarries near Kerch in 2016 – during the military-historical expeditions “adzhimushkai” organized by the defense Ministry, the Search movement of Russia” and the Russian military historical society.

But it is much more like buried, hidden safes and staff still remain undiscovered. Many of them know hardly anything but the most General information.

For example, the war historians know that somewhere in the wilderness of one of the forests okrestnostjah the Lithuanian town of Raseiniai lies buried staff a safe with documents 2nd armored division to major General Egor Selyankin heroically fought against German mechanized armadas in the early days of the war and almost completely destroyed in the environment.

For years the imagination of seekers of military artifacts stirs the legend of this treasure, hidden in the Meat district of Bor in Novgorod, where there were fierce battles. Allegedly, faced with the threat of complete encirclement, the command of the 2nd shock army was ordered to bury the safe in which were including many order staff Komandirov.

Happened to find in the ground and hidden safes-“dummy”. For example, during search operations near Petersburg, in the area of the former base, went down in history under the name of Nevsky Pyatachok raised from the ground the iron box of the great Patriotic war. But when opened it, saw the “stuffing” is completely worthless. Apparently, it was a personal farm of one of the German officers: linen, clothes brush, some straps…

On the Internet I happened to stumble on the relatively recent “safe” story. The family went for a walk in the woods, and one of the children suddenly collapsed in the void created under the upper layer of turf. Looked pretty deep hole, and the bottom of her the corner of a large iron object. The head of the family called to the aid of their buddies. Together they 5 hours dug up the treasure. In the end, in the depths of the pit “drew” vnushitelnye size iron box with lock. On one of its walls even survived the plaque, the inscription on which gives an indication that this vessel was manufactured in the USSR in 1940. With difficulty, with the help of automotive winch the men pulled the piece of metal out of the hole, drove into the garage. The next day, clearly anticipating large production, began operation on opening. Had grinder to act, and chisel… And as a result, the catch ridiculous. According to the author of the description, from the depths of the safe pulled out only a pencil and faceted glass.