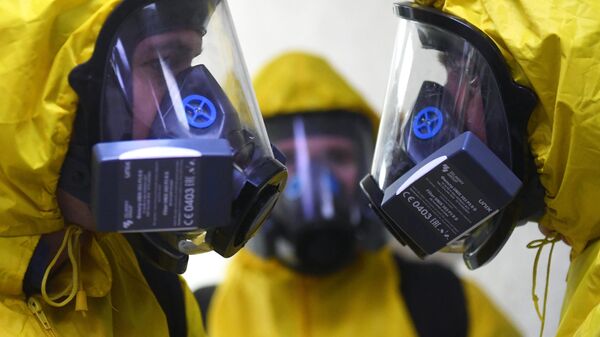 Alfia Enikeeva. According to the international database Nextstrain, has been known for 30 strains of the coronavirus SARS-CoV-2. They all evolved from a common ancestor, which last year initiated the first patients in the Chinese city of Wuhan. Species, arriving in Europe via Iran, more contagious than the one that spread in the South-East Asia and the United States. It was she, as some researchers suggest, was in Russia. In Moscow, the strains can be much higher.

The first data on the genome of the novel coronavirus emerged in early January. Since then, scientists have sequenced thousands of samples and counted about 30 different SARS-Cov-2. According to Chinese experts, the pathogenesis COVID-19 — how quickly the virus enters the human cells and destroys them — depends on the strain of the pathogen.

The researchers infected the same cell culture two of the most widespread variants of coronavirus, Asia and Europe, and compared virulence — the speed of replication of viral particles in the cells. The second was 270 times virulente. Accordingly, it is more contagious.

However, the severity of most coronavirus infection has nothing to do with what exactly strain will overtake the man. As British scientists have found, different variants of SARS-CoV-2 with equal probability can cause serious complications, up to the need of connecting the patient to the ventilator.

In Russia the genome of the new coronavirus was first sequenced members of the Institute of influenza name Smorodintseva in the second half of March. They isolated the RNA of SARS-CoV-2 from a nasopharyngeal swab at thirty women. By comparing the data with the Chinese strain of the virus, the researchers found five nonsynonymous substitutions.

Later in the Institute of information transmission problems, explore these features of the data added to the international database GISAID and placed in the public domain. Experts came to the conclusion that the Russian strain of SARS-CoV-2 closer not to Asia but to European more infectious. As reported in the Facebook head of sector, Institute for information transmission problems, Professor of the faculty of bioengineering and bioinformatics, Moscow state University Georgy Bazykin, a coronavirus isolated in St. Petersburg of the patient, “is inside a large, predominantly European clade”.

“The predominance of the basal European sequences in the neighborhood with our strong testimony in favor of the importation to Russia from Europe. Thus the treasure, which turned out to be the St. Petersburg sequence, is quite interesting: it is possible to get sequence from a known “second” outbreaks of closely related strains in Washington state,” — said the researcher.

According to him, we must strive to sequencing the RNA transcript of the novel coronavirus was as swift as it and testing. This will allow a better understanding of how the epidemic takes place in Russia and what to do.

Peculiarities of the national virus

According to researcher, Central research Institute of epidemiology, candidate of biological Sciences Anna Speranskaya, decryption of viral RNA without scrutiny of the results — not the right way.

“Today we are able to proceed to the production of information — the transcript of the viral genomes with a very high speed, but in this case the accuracy will suffer. We cannot guarantee that the obtained data will not be error. Since the beginning of the epidemic have repeatedly stated on the work performed, and then it withdrew. Because of this, scientists involved in evolution of viruses is more difficult to understand the flow of information. Perhaps we are slower than the other, recheck everything several times. But I can vouch for the accuracy of the conclusions”, — stressed Anna Speranskaya.

Now researchers from Central research Institute for epidemiology are working on the sequencing of the genomes of SARS-CoV-2, extracted from the samples of Russian patients. According to preliminary data, Moscow is dominated by strains that are close to the European species of coronavirus. However, in the capital hit and other variants of the pathogen, including from Asia.

“From the very beginning it was clear that Russia is in contact not only with Europe but with China and other countries are unlikely to circulate only the European strains,” — said geneticist.

These assumptions partly confirm the findings of the staff of the University College London. They analyzed 7666 different assemblies of the genome of SARS-CoV-2 and found that in countries with a large number of cases COVID-19 variety of coronavirus is particularly high. In particular, in the UK the number of strains of SARS-CoV-2 is almost the same as worldwide. This is because of the pathogen there delivered repeatedly.

In addition, the British experts have established that the genomes of coronavirus, the same mutation arose several times and independently from each other, that is, they were useful for different strains of the pathogen. Only experts have identified 198 such mutations, and 80 percent of them are associated with changes at the protein level. In other words, SARS-CoV-2 continues to adapt to a new host — man.

In RNA the Russian variants of coronavirus, the researchers also see mutations, is insignificant. However, these data will help Refine the forecast of the epidemic in the country in the coming months.