The cryptocurrency investment Fund Grayscale Investments acquired every third bitcoin miners produced in the last 100 days. And in April, the Fund bought 50% of all mined ETH. However, even despite the financial crisis and the fall of the stock market in March, shares of the trust CryptoRandom Grayscale in the first quarter of 2020 has attracted record investment, which speaks to the growing interest of institutional investors in the crypto industry.

Why so many coins, what is its current position in relation to the stock market and what role she plays on it?

Grayscale Investments, a subsidiary of Digital Currency Group (DCG), the owner of the famous crypto-media CoinDesk. Investment Fund is the largest institutional holder of bitcoin. The main product of the company — Grayscale Bitcoin Trust (GBTC), through which accredited investors can earn bitcoin without actually owning them. Grayscale Bitcoin Trust tracks the price of bitcoin based on the index TradeBlock XBX.

Grayscale accumulating bitcoin in an impressive scale. A Reddit user under the nickname u/parakite noticedthat the Fund has added 60 762 PTS ($548.3 million on the day of publication) in the period from 7 February to 17 may. That’s a third of the total number of bitcoins mined in the last three months.

The user made a table showing how I changed the number of bitcoins in GBTC: 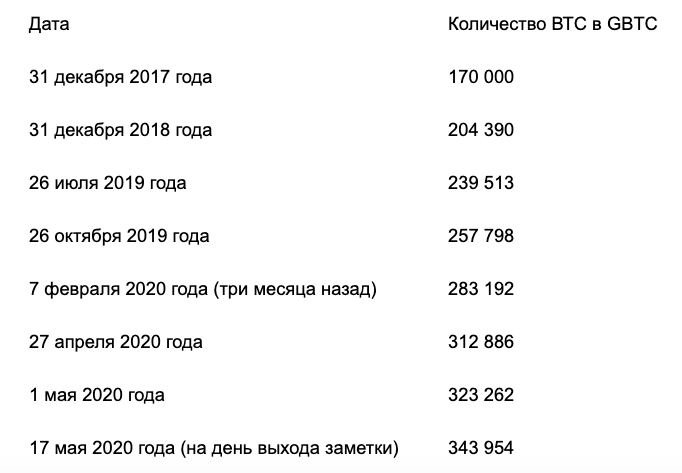 As you can see, the pace of procurement of VTS Fund c increase by the end of 2019. GBTC has become more aggressive in its acquisitions since the beginning of April before approaching halinga of Bitcoin. About 34% of the 60 762 VTS was bought for 17 days before the reduction of the remuneration of the miners.

“Grayscale is only one of many, albeit the largest ETF that people use to buy bitcoins, not wanting to mess with private keys and other problems, — commented u/parakite.

The demand is there. Offer reduced. Let’s see where we are after 100 days.”

88% of customers Grayscale institutional investors. Most likely, a sharp increase in the pace of purchases in addition to the PTS of the last of halving due to the desire of investors to hedge risks during a developing crisis. 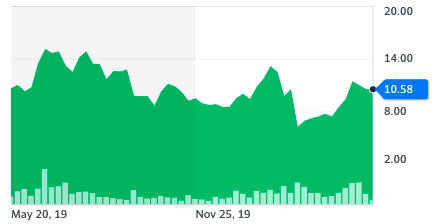 The stock GBTC for the last year, according to data from Yahoo.Finance. The price of the stock (shares) GBTC does not coincide with the price of VTS depends on the mood of investors and can be traded as a prize, and at a significant discount. It usually follows BTC, but sometimes, the trends diverge. So, the difference between the July and the current VTS rate of 20-30%, and between the same stock GBTC — about 70%.

Aggressive cryptococci Grayscale was recently spotted in relation to the ether. So, for April 24, the company purchased approximately 756 539 ETN (accurate data are not publicly available) for your Fund Ethereum Trust. About 48.4% of all mined 1.5 million coins since the beginning of this year. As a result, the company owns 1% of all coins in circulation and only increases the pace of procurement. It first drew the attention of a Reddit user under the nickname u/nootropicat.

According to the latest quarterly report Grayscale, the influx of investment in the ETN reached a record level in the first three months 2020 to $110 million Is a very sharp increase, given that the total investment in the ETN during the previous two years amounted to $95.8 million, the Total demand for Fund Ethereum for the quarter grew by almost 2.5 times compared to the fourth quarter of 2019.

With the beginning of the year until the end of April the company produced 5.23 million units of the Fund at the 0.09427052 ETH apiece. The shares are traded with a premium of 420% on the current price of the coin is $92 versus $17.70. That is, investors are willing to pay fairly for what not to do with a cryptocurrency of their own.

Most likely, the increase in the rate of purchases of coins due to upcoming network upgrade to the state of Ethereum 2.0. It can take place in late July, but most likely will happen still before the end of the year. After the upgrade the network will become more scalable and it will be a possibility of staking ETH — validators will be able to receive passive income for providing their funds to confirm the blocks.

The stock market, incidentally, is also preparing for the transition of the ecosystem to a new stage. Since the collapse in March of ETH increased by 55% — from $110 to $202 on the day of publication. At the end of April the publication CoinDesk drew attention to the increase in the number of long positions at the ETH-futures — this indicates the expectations for the further growth of the coin.

The last quarter — the most successful in company history

In may, the Grayscale Foundation published a report on the results of the first quarter of this year.

“Despite the decline in risk-weighted assets in this quarter, the Grayscale assets continue to approach record highs, and our market share of digital assets”, — the document says.

And this in spite of the coronavirus pandemic, the global recession and the traditional volatility of the stock market.

In the first quarter attracted a record $503.7 million investment. This is almost twice the previous quarterly high of $254 million in the third quarter of last year and is 83% of the total capital of $1.07 billion borrowed over the whole 2019. For new investors and had $160 million of borrowed funds. The main products of the company Grayscale Grayscale Bitcoin Trust and Trust Ethereum raised $388.9 million and $110 million respectively. It is noteworthy that the company has reduced the premium on the shares of the funds relative to asset prices.

88% of investment came from institutional investors, which are dominated by hedge funds; 5% — from accredited individuals, 4% from retirement accounts (Yes, pension funds are extremely conservative by nature, but also invested in bitcoin on the background of lower returns on other assets); 3% from family offices and 38% of customers have invested in multiple products at once.

It is noteworthy that two years ago the share of institutional investors was around 50% — obviously they don’t consider bitcoin as something criminal.

“Many of our investors see digital assets as medium and long – term investment opportunity and a core component of their investment portfolios. Quarterly inflows doubled to $503.7 million, showing that demand is reaching peak levels, even in a “reduce the risk””, the document reads.

Today, more than 46.5% of the inflow of funds was attracted from multistrategy investors. Crypto-investors amounted to only 11.2% of the inflow, according to the report. Source.

Grayscale now operates ten cryptocurrency investment products targeted at institutional investors. They cover VTS, ETH, ETS, BCH, ZEC, XRP, LTC, ZEN, XLM. The value of the assets under its management amounts to more than $3.8 billion GBTC’s most popular product, it is investing the majority of investors and it takes up about 1.7% of the total volume of circulating bitcoins. 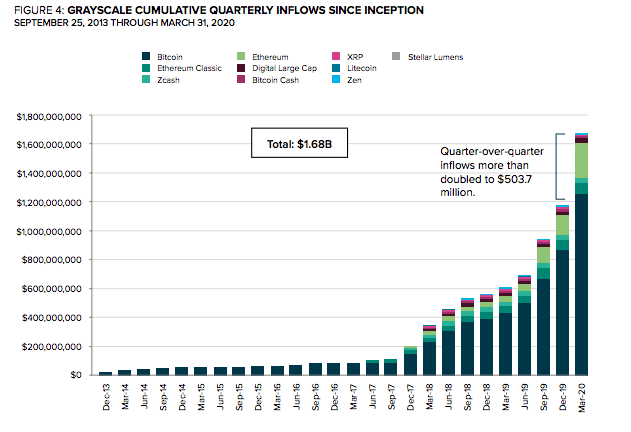 Aggregate quarterly inflow of funds into different products Grayscale. Note that, as a growing share of investors diversificarea the portfolios and products linked to Aldona.

Since January of this year when Bitcoin Trust was registered in the Commission on securities and exchange Commission (SEC). The company provides quarterly and annual reports on form 10-K. Status gives you the opportunity to sell units of the trust in the secondary market after 6 months, not 12, as before, but also boosts the confidence of conservative investors.

The rest of the products comply with the reporting standards on OTCQX, the OTC market and approved by the regulatory authority of the financial services industry of the USA (FINRA) for a public offering.

The volume of assets under management Grayscale on 20 may 2020.

It is noteworthy that the news about the success of the Grayscale come amid news about how panicked investors in traditional assets are fleeing from the turmoil in the market. Thus, the largest Fund managers — BlackRock, Vanguard and State Street Global Advisors — has lost several trillion in capitalization of their assets and the BlackRock in the first quarter for the first time in five years was observed a net outflow of funds from long-term investment products.

Bitcoin is the best asset to hedge portfolios during the crisis

In late April, when the company also released a separate report on the analysis of the impact of actions of regulators during a pandemic and the consequent crisis and how it affected the bitcoin and the stock market as a whole.

The document says that Fiat currency at risk of devaluation, as Central banks print more money. Even the US dollar, which is the world’s reserve currency, risks being devalued if the Federal reserve continues to print currency by the trillions. And lowering interest rates to zero and negative values makes government bonds of the status of “safe haven” during the crisis.

Therefore, investors try to diversify their portfolios with alternative tools. Cryptocurrency is the best choice for this, according to the authors of the report. The text stresses the historical importance of gold as a global standard, but it is noted that in the modern digital world it is becoming more burdensome for investors — it has complex logistics.

Bitcoin seems resilient to the problems faced by other assets. Therefore, in times of economic uncertainty, the first cryptocurrency is one of the best assets that investors can use to hedge their portfolios. Coin shows better results than any other asset, including Fiat currencies, government bonds, and traditional goods like gold. The authors of the report stress that bitcoin has already begun to show signs of becoming a defensive asset.

The company believes that bitcoin is a great asset not only in times of crisis. So, in December of 2019 Grayscale managing Director of Investments Michael Sonnenschein saidthat the company expects investment in bitcoin after transfers $68 trillion of savings between generations in the next 25 years. Today, the capital invested in traditional assets, but a significant portion of these resources Millennials will invest in cryptocurrencies. Now, according to him, investment in GBTC are the five most popular among young people, ahead of, for example, investments in Microsoft and Netflix.

The unprecedented fiscal measures taken by the fed and the worsening recession forced even the most conservative investors to rethink their current strategies and portfolio composition. Many of them are increasingly starting to appreciate a fixed issue and recorreremos bitcoin — it becomes a tool for risk diversification. Growing institutional interest facilitates the dispersal of coin prices.

Publication date 26.05.2020
Subscribe to the news of the cryptocurrency market in Yandex Messenger.
Share this material on social networks and Express their opinions in the comments below.