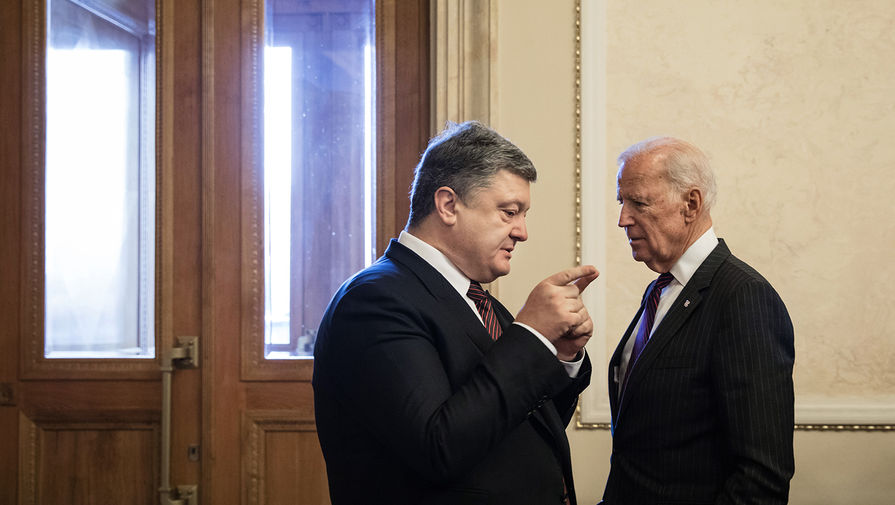 In Ukraine are investigating the possible installation of “bugs” in the office of ex-President Petro Poroshenko after the publication of recordings of his alleged conversations with Joe Biden, which indicate the control of Washington over Kiev. It goes in parallel with the investigation of treason, ex-President of Ukraine. Scandalous records re-tighten Kiev in American political showdown and put Vladimir Zelensky before a choice — to support the Democrats, led by Biden or bet on Donald trump.

The state Bureau of investigation of Ukraine opened a criminal case after the publication of the recordings of conversations, presumably, of ex-President Petro Poroshenko and former Vice-President of the USA Joe Biden. Investigators have begun checking the unlawful installation of listening devices in the office of former Ukrainian leader, writes “Ukrainian truth” with reference to the materials of the Unified register of pre-judicial investigations.

According to the document, the possible use of “bugs” could prejudice national interests of Ukraine. In the materials the name of Poroshenko does not appear, but the newspaper’s sources confirmed that the thing is connected with the wiretapping of the office of the former President.

Records of alleged conversations of Biden, Poroshenko and former head of the state Department John Kerry released on may 19, the Verkhovna Rada Deputy Andriy Derkach. Films are discussed on the Ukrainian domestic political issues, in particular, the dismissal of Prosecutor General Viktor Shokin in exchange for financial assistance from the United States, indicating the intervention of Washington in the Affairs of Ukraine.

Currently, even the Dr. is not sure what the records say exactly Poroshenko, Biden and Kerry, but the voices of the participants in the negotiations, indeed, very similar. However, the attorney General’s office of Ukraine still brought a criminal case of treason and abuse of power against former Ukrainian leader, joining the film to the investigation.

The emergence of third-party proceedings in the RRT can be considered as the opposite of the case of treason, but in fact it is not. According to Derkach, he received the recording from some journalists, but a source of real “plum” is still unknown. Possible wiretapping of the office of the first persons of the state — the event is quite extraordinary, therefore, nothing surprising in finding the “spy” is not.

The main question is how will continue to move the investigation surfaced records. If to speak about influence on the American side, it is actually not. The US President Donald trump, who often uses every opportunity to attack his opponent, yet ignores this history, though to say that he will not use it in the future, no one can.

About the American press, including major publications, a new scandal highlighted in The Washington Post, loyal to the Democratic party. A number of publications came out with the motif in the films nothing, and need investigation also.

Ukrainian media saw the American edition of a specific message for Kiev.

As noted, “Strenia” WP writes that using “film Derkach” in their domestic political purposes, the President of Ukraine Vladimir Zelensky “need to understand” that by joining the campaign against Biden, he “can jeopardize long-term relations between Ukraine and the USA”.

Thus, the newspaper that supposedly sends a warning to the Ukrainian leader, which he is not followed. Zelensky, on the contrary, supported the investigation of the controversial conversations Poroshenko.

“They ruled the country, that they will have many different adventures, different sentences. Don’t want to talk about it, because it’s powers are still not mine. Will investigate, I know that this may be perceived as treason, but this is to the law enforcement authorities”, — said the President of Ukraine.

In their statements Zelensky do more emphasis on Poroshenko, not Biden, in an effort partly to hint at the fulfilment of his campaign promise “to put Poroshenko”.

However, any investigation one way or another will affect the former Vice-President of the United States, which already became a contender for the presidency from the Democrats. Thus, Kiev is again faced with a choice whom to support in American domestic politics.

In 2016 Poroshenko made a bet on the Democrats and their candidate, Hillary Clinton, as repeatedly said trump, accusing the Ukrainian side of meddling in the election. Starting a business in a conversation the ex-President with Biden, Zelensky actually takes the side of the current American leader, putting on his possible re-election.

Formally, any signals from the White house on its relevance to the investigation still has not been received, the only response can be considered a post on Twitter from Donald trump Jr. as he posted a video with “film” and stated that it will strike on Biden.

By the way, Zelensky for the second time this year involve in the internal political struggle in the US is almost on the same topic. So, in September last year, his conversation with trump was the reason to start impeachment against the American leader with the Democrats in the house of representatives.

The investigation began due to the fact that the US President has asked his Ukrainian counterpart to open a case against the Ukrainian company Burisma, associated with Biden’s son — hunter. Biden Jr. was appointed to the Board of the company, when the attorney General Shokin organized proceedings against Bursima. According to trump, Biden sought his dismissal from Poroshenko to stop the case against the company, son. The former Vice-President demands the resignation of Shokin does not hide, but it explains the need for anti-corruption reforms in Ukraine.

When the Democrats started impeachment proceedings against trump, Zelensky was faced with a dilemma — to meet the request of the President of the United States or to abandon the launch of the investigation. At that time the President of Ukraine chose the latter, partly playing in favor of the Democrats. But in the end, trump was acquitted, confusing maps to their opponents and Zelensky.

Serious consequences towards Ukraine was not followed, at least officially, but now the situation has changed. Before the election of the President of the United States is less than six months, and the wrong decision Zelensky can create serious risks for interaction with Washington in the future.

A good relationship is necessary for Ukraine, because the US is one of the largest financial donor of the country. Only to strengthen the defense capability of the Ukrainian forces starting in 2014, Washington allocated more than $1.3 billion.