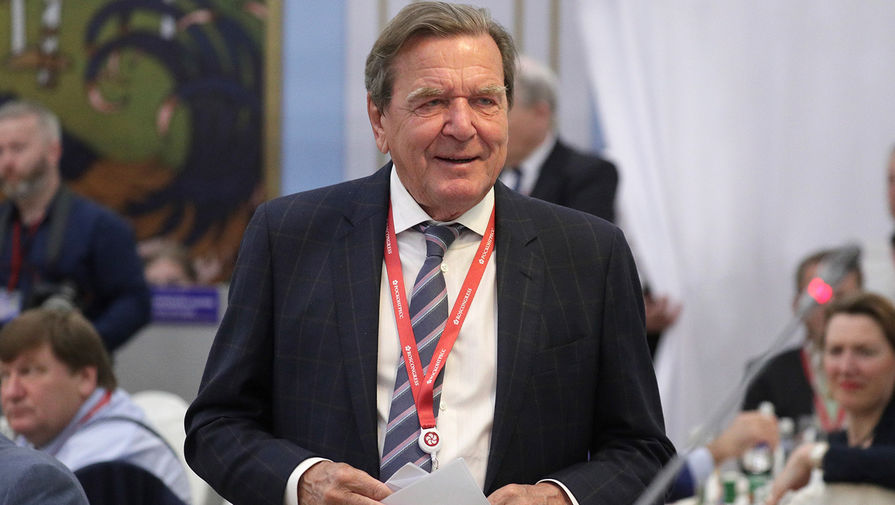 Former German Chancellor Gerhard Schroeder again called for the lifting of anti-Russian sanctions, simultaneously criticizing Kiev Ambassador in Berlin, who hold the opposite point of view. The former head of the Cabinet of Germany called the diplomat is not interesting to anyone, describing the General mood in the country, where increasingly there are calls for the lifting of sanctions against Russia. In Germany are gradually moving away from the Ukrainian theme in favor of restoring relations with Moscow — in the material “Газеты.Ru”.

Former German Chancellor Gerhard Schroeder started the podcast and already in the first issue managed to engage in a polemic with the Ambassador of Ukraine in Germany Andrey Melnik, calling him a “dwarf” for his criticism of calls for the lifting of sanctions against Russia.

“We should not annoy each other with sanctions. I was trying to indicate that it is true for Russia. Why, then, is whether the Ambassador, or former Minister for foreign Affairs, a dwarf from Ukraine, criticizes me? No one is interested even in Germany” schröder said during his podcast “the Agenda”.

Name of the Ambassador of Ukraine eks-the Chancellor is still not known, but in recent times any critical remarks about Schroeder said it was Miller. A small conflict between them arose in early may when the former head of the Cabinet of Germany in an interview with Der Tagesspiegel called anti-Russian sanctions meaningless.

“Now, when we are approaching the complex from the point of view of economic times, due to the coronavirus, we need more cooperation. It is therefore meaningless sanctions should be lifted. Whoever thinks that Russia can be anything to force through sanctions,” said Schroeder.

In turn, Miller decided to argue with the former German Chancellor and accused him of lobbying the interests of Russia. According to him, the louder the supporters of Moscow “screaming about meaningless” sanctions, the more obvious becomes the positive effect of the restrictive measures. From his point of view, Schroeder allegedly receives a small remuneration from Russia, in particular, for the promotion of the best Russian party of ideas in Germany.

But schröder is not the only politician who speaks about the need to abolish the restrictive measures against Russia. Even the current German Chancellor Angela Merkel acknowledged that the sanctions in the context of a pandemic are a negative factor.

“We all want to thrive economically, and sanctions from this point of view, I must say, unpleasant. When I think about the sanctions against Russia imposed over the Ukrainian issue, we are working to resolve the political problems that are their cause,” explained the Chancellor.

In such exceptional situations the world is facing a common problem, continued Merkel, it is necessary to call for conflict resolution for getting rid of sanctions.

Overall, the statement of the Chancellor there is nothing sensational, she had recognized the problem of sanctions, as she consistently reminds the German business. Many companies in Germany, and politics, in favor of lifting anti-Russian restrictive measures, because of their negative impact on the German economy.

According to estimates publication Handelsblatt, Germany loses about $667 million monthly due to the sanctions against Russia. Moreover, calls for the abandonment of these policies are louder in the background of the pandemic, which led to recession in the German economy. Thus, in the first quarter of 2020 the country’s GDP fell by 2.2%, the government has forecast it to fall to 6.3% by the end of the year.

“This is the strongest decrease since the global financial crisis of 2008-2009 and the second largest collapse since the reunification of Germany,” — said at the Federal statistical office of Germany.

Talk about the fact that the sanctions against Russia must be removed during the pandemic became louder than ever, says “Газете.Ru” the German political scientist, the scientific Director of the German-Russian forum Alexander Rahr.

“Resumed the actions of the German economic lobby, which advocates for the opening of the Russian and Eurasian market for easier exit from the crisis caused by the pandemic coronavirus.

With Russia and the Eurasian Union countries may get a new relationship so the business has intensified along with certain politicians on the issue of lifting of sanctions,” — said the expert.

To push their position they fail because of resistance from the United States, the leader of the West, said Rahr, the White house advocates for tougher restrictions, and has a number of allies in the EU.

That’s probably why Merkel is not going to consider the option of withdrawal of the restrictive measures, following a common European position on this issue. The European Union imposed restrictive measures against Russia in 2014 in light of the conflict in the Donbass and the transition of the Crimea under the Russian jurisdiction. The sanctions have affected trade, financial and military aspects, as well as the parties had suspended talks on the agreement on cooperation and visa-free regime.

For six years, the EU systematically extends and expands the anti-Russian restrictive measures, mainly due to the lack of progress in resolving the conflict in Ukraine. At the same time Russia responded to European sanctions by ban of certain food products from EU countries.

The overall attitude of Brussels for the lifting of sanctions against Moscow, is the need to resolve the situation in the Donbass. Crimea, the EU also considers, but lately it is a few leaves on the second plan, since Russia considers this issue closed. And any special discussion of this point is not happening — in the Donbas is Minsk agreement, together with the contact group, in the Crimea there is nothing.

There is a problem in the “Crimean issue” was acknowledged by the President of Ukraine Vladimir Zelensky during the press conference for the year of his presidency. According to him, he constantly raised the subject during interviews with foreign leaders, but there are no venues devoted only to this issue, Ukraine could not be established.

“The issue of Crimea in the information space, maybe a little, but it just not enough in the Affairs of the state that works,” — said the Ukrainian leader.

Zelensky complained that European countries are more concentrated in the Donbass in the issue of anti-Russian sanctions, so Kiev has to participate in the Minsk process to maintain them.

“We will fight to the end for “Minsk”, because with “Minsk” related sanctions against Russia. And you know that they all want to shoot, and not only Russia but also many European countries. I understand that they are economically suffering because of these sanctions”, — said Zelensky.

However, the desire of the Ukrainian side to maintain sanctions against Russia, the EU may not be much to take into account the background of the General exhaustion of Europe on the Ukrainian question. As mentioned, Gerhard Schroeder, is “nobody cares”.

“The sanctions can be removed very easy if one country within the EU for the next online conference refused to renew restrictive measures. This country could be, for example, Italy, which helped Russia within the framework of a pandemic,” says Alexander Rahr.

Regarding the struggle in Ukraine for the sanctions, he said the desire of Kiev to embroil the West with Russia. In particular, with the failure of its part of the Minsk agreements, which prevents the settlement of the situation in the Donbass.

“The Ukrainian ruling elite wants to get help from Western countries, and closer to Europe. From their point of view, the better will the normalization of relations between the EU and Russia, the more Ukraine will lose its value. Therefore, they are more interested in the conflict”, — concluded the RAR.