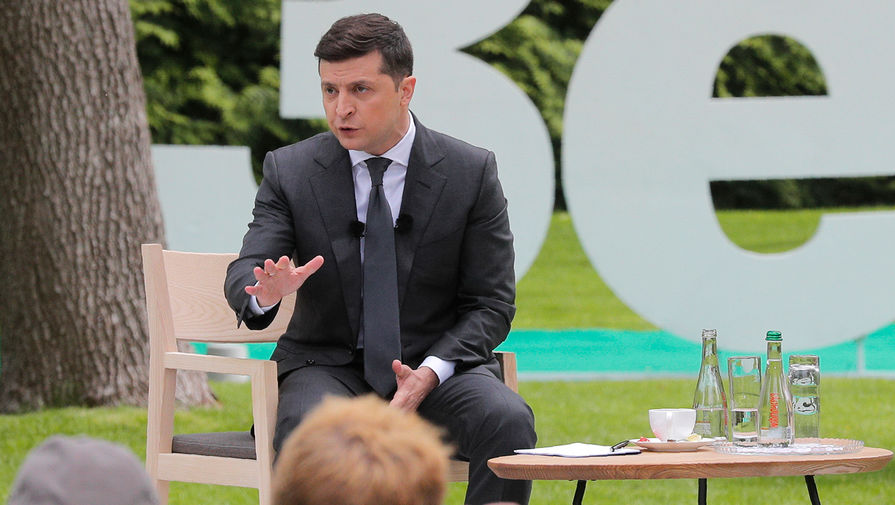 Speaker of the Verkhovna Rada Dmitry Razumkov called for review of the disputed Ukrainian law on state language, which infringes on the rights of national minorities in the country. According to him, the initiative is intended to unite the Ukrainian society. Razumkov made in defiance of Vladimir Zelensky, denies the existence of a “language issue” in Ukraine, and partly put the President to show political will by changing the law, or to continue the policy of his predecessor Petro Poroshenko.

Speaker of the Verkhovna Rada Dmitry Razumkov said that the law “On ensuring the functioning of the Ukrainian language as the state” needs to change. There are positions that can be perceived both negatively and positively, he said in an interview with “Glavkom”.

“Any politician, especially in conditions of war and difficult situation in the state, should not think about how positively or negatively it will be perceived, the words of the language, and to understand — this unites the Ukrainian society or not,” said Razumkov. According to him,

bills to change the law of total Ukrainization, already submitted to the Verkhovna Rada, but on the agenda of the nearest plenary sessions all of them yet.

At the same time in the presidential party “servant of the people” to the law on state language are treated differently, noted by Razumkov, a number of deputies holds radical positions on Ukrainianization.

“From too radical in defense of the Ukrainian language deputies to those who will take a completely opposite position. You can see it yourself. But for the most part, I think, would be to stick to the centrist position”, — said the speaker.

Razumkov’s statement came amid a scandal in “the Servant of the people” associated with the discussion of the Russian language.

According to “Strenia” the MP argued in a private chat room of the party because of different views on the fate of the law on state language. Media published screenshots of the dispute between parliamentarians Evgeny Shevchenko, Alexander Alekseychuk and Andrei Motovilovym.

So, Shevchenko advocated a departure from the total Ukrainization, Recalling that it promised to make the President of Ukraine Volodymyr Zelensky during his election campaign. Motovilova with Alekseychuk was opposed, refusing the revision of the law on state language.

The statement of the speaker of Parliament contrary to the position of President. How Zelensky said during a press conference on the anniversary of his inauguration, there is no “language question” in Ukraine.

“The question of language in Ukraine is not worth it, very artificial this question.

Justice must be for all. We have many national minorities, for many native language is not Ukrainian. But I think that they should know the Ukrainian language, that’s fine,” said the Ukrainian leader.

In the example Zelensky has brought relations of Kiev with Budapest, in which there is some tension, especially because of the Ukrainian law on language. The President has acknowledged that Hungary tries to prevent the Ukrainian side to get into the EU and NATO because of the issues of historical heritage and language. Then Kiev is ready to meet and sign a Memorandum for the settlement of disputes.

But any problems with Russian-speaking population of Ukraine does not see Zelensky, he never answered the question of a possible revision of the controversial law. Against the Russian he only promised to consider expanding the quota to use for the media — currently the share of state language at the national channels shall be not less than 90%.

Zelensky not only denies the “language question”, but quite clearly contributes to the continuation of the policy of Ukrainization in the country.

From 2020, all research papers should be written in Ukrainian, MOV is embedded in the workflow of enterprises, as well as medicine and transportation.

At the end of autumn should begin Ukrainization services — cashiers and waiters will be required to speak only Ukrainian in order to avoid heavy fines. The changes will affect the stores where the labels of all commodities must be on the move, and the text in another language should not exceed the volume of Ukrainian.

The program of Ukrainization in General, 2030, and the particular desire to review the government of Ukraine is not yet manifest. However, the statement Razumkov can be seen as a signal Zelensky in this direction, and the ambiguous opinion of the deputies of the “public Servants” contributes to the issue.

The speaker of Parliament separately indicated generally centrist position of the party Zelensky, that most likely alludes to support changes to the law on state language, if the President gives the “green light”. However, there against the Ukrainian leader play echoes of the era of his predecessor, Petro Poroshenko, is the growing nationalistic movements which so affect the policy of Kiev.

The language issue to their representatives is extremely sensitive, mainly because of an actual ban on Ukraine of the Russian language.

From the point of view of the nationalists, Russia — “country-aggressor” due to the annexation of Crimea and the conflict in the Donbas. This line actively support in Kiev, and relief in respect of the Russian language do not fit in it.

However, a large part of the population of Ukraine is Russian-speaking and prohibitions contribute to the fragmentation of the state that is experiencing internal conflict. As said Russia’s permanent representative to the OSCE Alexander Lukashevich, the law on state language has divided Ukrainians to speak Ukrainian and “rogue” States, whose ability to learn, to heal and to use other social services is severely limited.

In addition, the reference to the opinion of nationalist movements partly gives Zelensky progress in the peaceful settlement of the situation in the Donbass.

Last year, the President had to face resistance activists who organized the protests in Kiev against giving “special status” to the region. Also, the radicals tried to prevent the withdrawal forces on the separation line, forcing Zelensky to come to resolve the conflict.

In the end, a year after his inauguration, the Ukrainian President did not actually move in the matter of establishing peace in the region. Even achieving the resumption of the “Norman format,” he can’t carry out the agreement on full cease-fire and new parts of the breeding effort.

The provision of “special status” Donbass and is shelved together with the issue of Amnesty and a direct dialogue with the breakaway republics. And the total calls Zelensky possible revision of the Minsk agreements is quite similar to the performances Poroshenko, who the current President is actively criticizing.

However, words Razumkov about the admission to Parliament of bills to change the law on the state language gives a chance for some change. The main question is whether Zelensky him to openly support or not.