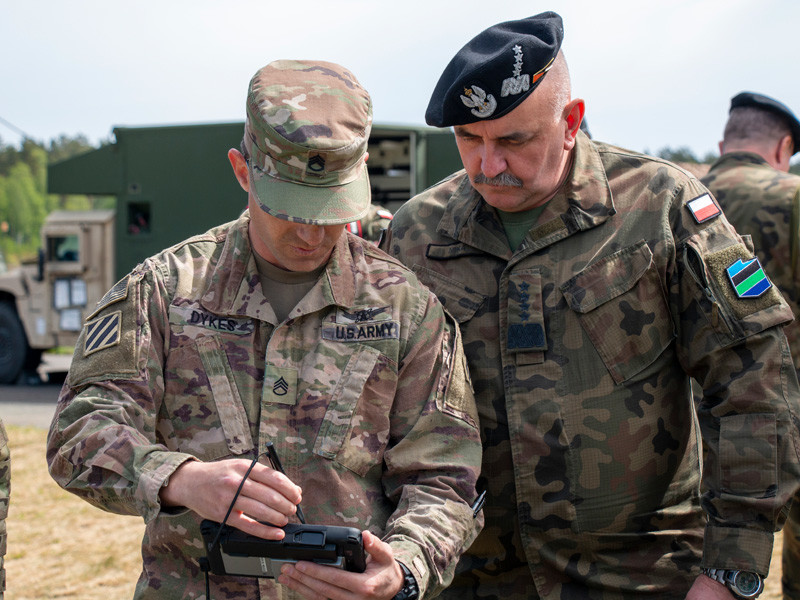 NATO is preparing to resume interrupted due to pandemic coronavirus military exercises in Europe. June 5 start of the U.S.-Polish exercises in the framework of large-scale multinational maneuvers under the guidance of USA Defender of Europe 2020 (the”Protector of Europe 2020″).

It was originally planned that they will be the largest in 25 years, they had to attend more than 37 thousand soldiers from 18 NATO countries and partner countries of the Alliance. Because of the pandemic, the maneuvers had to be stopped, now they will resume in a truncated scale.

According to “Kommersant” in April, Russian foreign Minister Sergei Lavrov has written to the NATO Secretary General Jens Stoltenberg a letter inviting the sides to suspend military activity for the duration of the pandemic. According to the Russian side, this decision in the spirit of “military restraint” would be a “constructive, positive and healthy step.” It was argued that Russia unilaterally has already made a noticeable decrease in military activity near its borders with NATO.

Stoltenberg, according to the official representative of the Alliance Oana Lungescu, said that NATO’s actions “are strictly defensive, proportionate and in line with our international obligations.” Advanced and strengthened NATO’s presence in Eastern Europe is a response to Russia’s use of “military force against its neighbors and building up its military potential in the Baltic region and beyond”.

According to Lungescu, Russia, in spite of their proposals is continuing a large-scale sudden teachings, and the behavior of pilots in the Baltic and Mediterranean seas is unprofessional. At the end of April, the Baltic fleet actually spent a few exercises involving ships, aircraft, helicopters, combat vehicles and naval infantry in Kaliningrad region, the newspaper said.

In addition, Stoltenberg once again urged Russia to update the Vienna document on confidence-building measures and security of 2011. This agreement provides for the exchange of information on military forces, defense planning and budgets. In the framework of the Vienna document countries are mutual inspection are notification exercises. However, NATO believes that this tool is outdated, and for several years urged Moscow to upgrade it. On the Russian side says that cosmetic changes to the treaties will not save the situation.

Russian Deputy foreign Minister Sergei Ryabkov said that the Russian side “disappointed” response to a letter of Sergey Lavrov. According to him, Russia is unable to go to the “unilateral concessions” to the North Atlantic Alliance, and NATO “could consider what to offer Russia and what her real interest in ensuring its own national security” if the Alliance wants to move the issue of the modernization of the Vienna document.

Last week the head of the defense Ministry Sergei Shoigu said that the West is now the greatest threat from the standpoint of military security of Russia. In the Western military district since the beginning of the year has passed already more than 30 exercises, which are “purely defensive in nature”. Also scheduled 28 “organisational measures” to improve the fighting strength of troops, synchronized with the supply of about 2 thousand units of new and upgraded equipment.