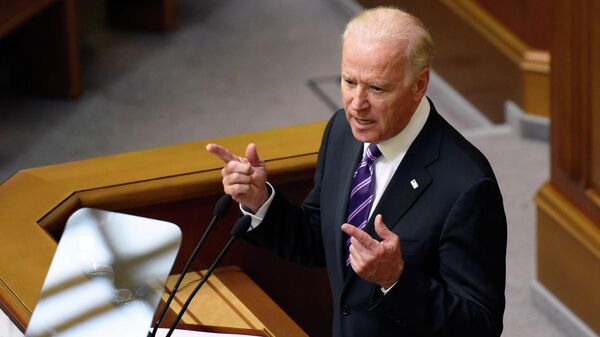 US Democrats put pressure on Ukraine and Germany in order to hush up the case of former Vice-President of the United States Joe Biden, which demonstrates the unprecedented intervention of Washington in the work of the Ukrainian Cabinet of Ministers and the scheme of financing of election campaign of presidential candidate Hillary Clinton, said RIA Novosti former member of Parliament, involved in the “gas business” Alexander Onishchenko, who in 2015 was a confidant of the former leader of Ukraine.

Democrats in the U.S. previously organized the impeachment process against President Donald trump, suspecting him that he has delayed military assistance to Ukraine and demanded the exchange to conduct an investigation against his political opponent Joe Biden and his son hunter. Trump said that demanded from the authorities of Ukraine only the fight against corruption.

Biden’s son has served on the Board of Directors of the Ukrainian energy company Burisma, and trump thought that Biden Sr. succeeded in stopping the investigation against the company and dismissal of the then Prosecutor General of Ukraine Viktor Shokin. Guide Burisma was suspected of money laundering, tax evasion and illegally obtaining license for extraction of mineral resources. The U.S. Senate acquitted trump on both counts – abuse of power and obstruction of Congress. Thus, the process of impeachment failed, trump remained in the office.

In late may, independent MP Andriy Derkach released recording allegedly of a telephone conversation Poroshenko and Biden, who, according to him, evidence of international corruption and treason of the former President. One of the conversations concerned the dismissal of the Victor from the post of Prosecutor General of Ukraine allegedly at the request of Biden. In exchange, he allegedly promised Poroshenko to provide Ukraine with $ 1 billion. In addition, records have discussed the alleged presence of the coalition in Parliament, the resignation of the government of ex-Prime Minister Arseniy Yatsenyuk and approval by Parliament of the government of ex-Premier Vladimir Groisman.

As stated by RIA Novosti Onishchenko, he’s using a Ukrainian lawyer reported record Derkach, Poroshenko and Biden. He also transferred part of the records of the administration of the trump.

“I think it was from the democratic camp in the United States,” – said Onishchenko, answering the question of who could stop him to submit his evidence to the US in 2019.

“The relationship between (U.S.) Democrats and Germany is still very strong. They do not like trump here. It mostly is portrayed in the media as an idiot. Democrats are still very influential in Germany, USA and, of course, Ukraine. Trump administration had no influence there until the present time. The Democrats are still doing it through the Soros Foundation. American Consulate in Ukraine are directly linked to Soros. Its influence extends to the Ukrainian government,” – said Onishchenko, answering the question about the reasons for his arrest in Germany last fall.

According to the former Deputy, he also met with representatives of the FBI in 2017, he “offered them the same deal record against protection.” “But they didn’t because the FBI was then still closer to the Democrats than to the administration trump. Karen Greenaway of FBI investigated cases of corruption between the US and Ukraine. But she was also more associated with the Democrats. So we had this meeting, and I told him that I have. And they promised to help, but then they did nothing. Only when the administration trump found out about it, they took action. And now, when I was arrested (in Germany), it’s been months, and the day when I could be extradited to Ukraine, I decided to publish most of the records and send them to the United States. And then it all went very quickly and I was released”, – he said.

“Maybe… at the end of November when I was arrested, (candidate of the democratic party of the United States in the presidents of the United States Joe – ed.) Biden was still in the bottom of the rankings and therefore was not a threat to trump. Then in February, Biden has suddenly become a major competitor to trump. It again made my material interesting for the team trump… (the Lawyer trump Rudolf – ed.), Giuliani and his men again got in touch with my lawyers. They have already been in touch earlier, we initially prepared for a press conference in November. Between my lawyers and the team Giuliani has been hundreds of e-mails. Then they wanted to go to jail here in February with a delegation from the American Consulate and the press. But then I got to the hospital. And later came the coronavirus, and it was canceled,” – said Onishchenko.

Against Onishchenko Ukraine initiated several cases, including under article “plunder of the state property in especially large sizes”. According to militiamen, from January 2013 to January 2016 employees of several companies, including the company “Ukrgazvydobuvannya”, with the assistance Onishchenko has received public funds by selling gas domestic production at a lower price. These actions caused damage to the state amounting to about 120.5 million dollars. Later Rada has consented to the involvement of Onishchenko to criminal prosecution, his detention and arrest, but he left Ukraine. The Deputy is also suspected of treason and “the preparation of destabilizing the situation” in Ukraine.