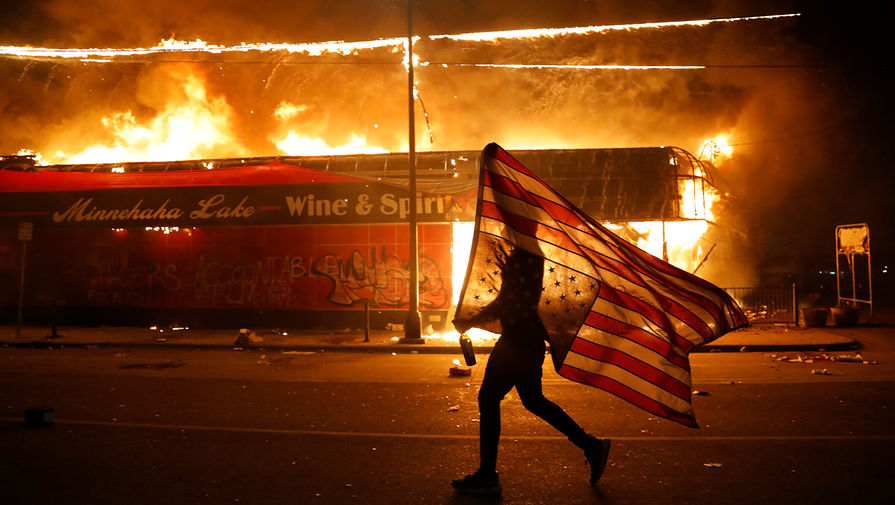 The President of the United States Donald trump sent the National guard to Minneapolis, where a few days are rioting because of the murder of a black citizen by the police. The White house expressed dissatisfaction with the “weakness” of the mayor, a member of the Democratic party. Incidents causing in American society outcry over racism — are familiar to US, and both political parties know how to respond to them.

In Minneapolis inflames the confrontation of the President of the United States Donald trump and mayor Jacob Frey. On Friday, the White house sent more than 500 soldiers of the National guard to suppress protests in the city.

“We have deployed more than 500 fighters in Saint Paul, Minneapolis and nearby areas. Our mission is to protect lives, protect property and guarantee the right to demonstrate peacefully,” — said in Twitter-account of the American national guard.

The promises the President gave a few hours earlier, entered into an open argument with the mayor.

“Can’t stay away and look at what is happening to the great American city of Minneapolis. Complete lack of leadership. Or very weak radical left mayor Jacob Frey will take action and take control of the city, or I will send in the national guard and do everything right,” wrote trump on Twitter. 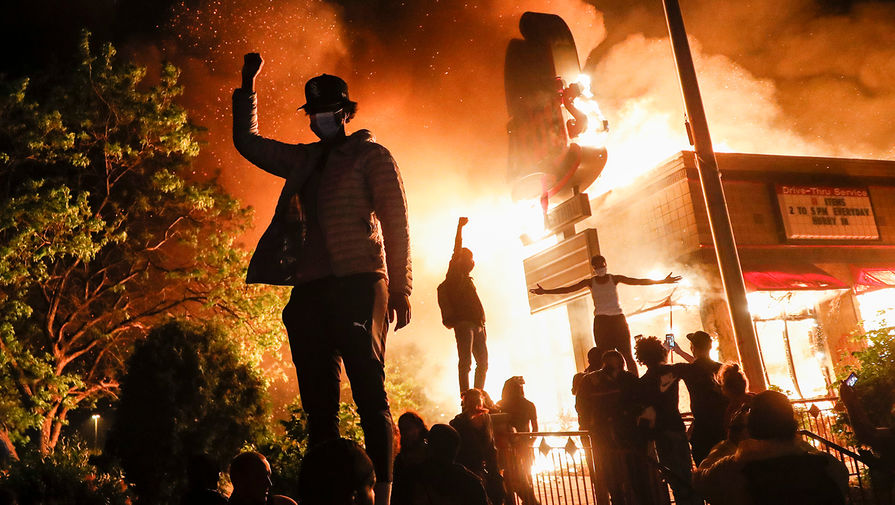 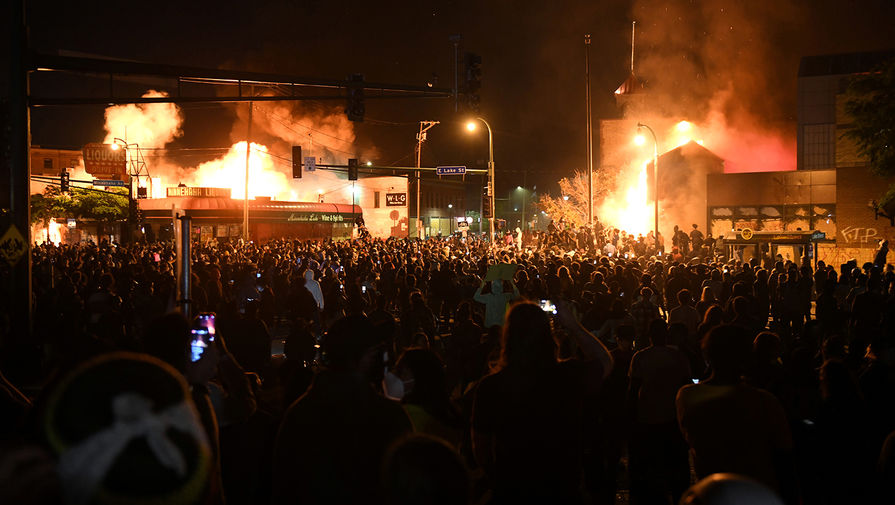 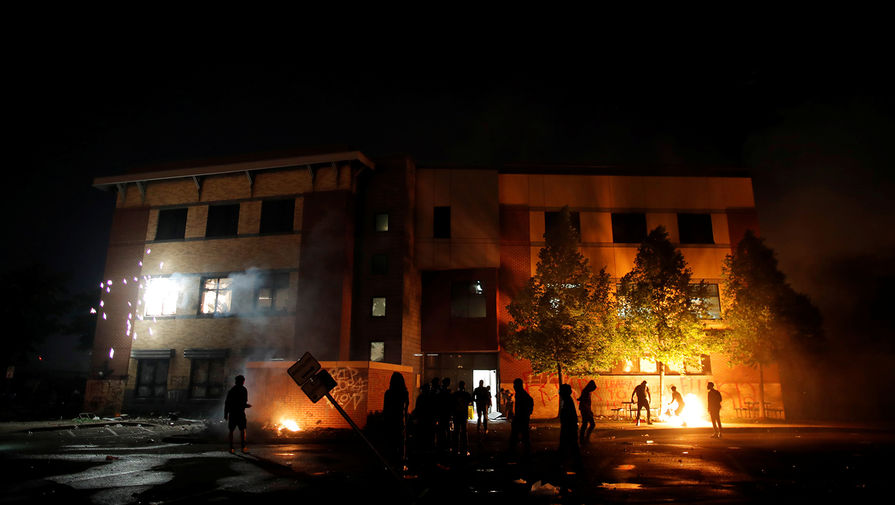 Entered the conflict, and the social network Twitter, where the President also is fighting the last few days. The message trump has been flagged as violating the rules of the company about the glorification of violence. The next President was hidden by the company.

“Just spoke with Governor Tim Walzem and told him that the military is with him all the time. Any difficulties, and we’ll take over the controls when the looting starts, the shooting starts”, — was said in the hidden message of the President.

The head of the White house has threatened to close down Twitter in the U.S., just because of such actions of the company.

The message of the trump of weakness and reacted to the mayor of Minneapolis.

“Weakness is a failure to take responsibility for their actions. It is weak to blame someone else during a crisis. Donald trump knows nothing about the power of Minneapolis. We are damn strong. Yes, these are difficult times, but we will get through this,” Frey said during a press conference broadcast which led NBC.

The head of the White house, one way or another, fulfilled his promise pretty quickly. It is possible that radical steps impulsively of the President prompted that action of the company Twitter and the mayor of Minneapolis.

May 25 in Minneapolis has died 46-year-old African American George Floyd. His death came after a citizen was detained by the police. Soon, the Internet has spread a video footage of the detention, which shows that Floyd did not resist, police threw him to the ground, handcuffed, one of them pressed a knee on the neck of the detainee. Floyd complained of shortness of breath, and then lost consciousness. He was hospitalized and soon George Floyd died in intensive care.

The incident sparked a wave of riots in Minneapolis and other cities. Police detained Floyd was fired, but that didn’t stop a wave of discontent citizens. The protests were accompanied by fires, clashes with police, arson of a police station.

The reasons are rooted in racism. According to opinion polls the PEW Research Center, 84% of adult African Americans believe that police treat them biased. Agree and 63% of white respondents. Every second black argues that the officers stopped him without cause. American society regularly discusses the history, when the police for no apparent reason to use violence against the detainees blacks, fearing that they have weapons.

“The conflict in Minneapolis happened by objective reason — the problem of police violence, the issue of the effects of racism that forces blacks to live in ghettos. We know that black Americans, while only 13% of the population, commit over 50% of crime is, of course, is gang-related, etc., but it is a criminalized environment. And the police who work in a country where legalized weapons, and who understand that every day they may be faced with an armed person, even instinctively seeing a black offender, nervous, much more than when they see white, for example, of the offender,” — said in a conversation with “Газетой.Ru” americanist, expert of Russian Council on international Affairs Alexei Naumov.

However, the problem of racism has already been closely interwoven with the political realities of the United States, each time becomes the field of confrontation between Republicans and Democrats, and the conflict between trump and the mayor-a Democrat was the result of steady confrontation. The difference in approaches is visible in the statements of the mayor and the President.

“The methods (of the police), which we saw, is invalid. When you hear that someone asks for help, you should help. The officers have not demonstrated basic human reaction. It’s awful. To be black in the USA should not mean a death sentence,” said Frey, while trump called for order and threatened to enter the National guard.

And, as noted by Alexey Naumov, the incident that happened in Minneapolis is not uncommon, and both political parties already know how to play this situation.

“The fact that police officers during the arrest killed a black is not some kind of shocking news, it happens, and happens, unfortunately, quite regularly quite regularly occurring riots of blacks. Naturally, every political force tries now this situation to turn to his advantage. Trump will say that the Democrats lack the leadership, they are unable to cope with the poverty of the black population and just, in General, use them as weak-willed slaves who vote for them. And the Democrats, including Joe Biden, will actively emphasize on your experience of blacks and say that it will not happen. But the truth is that, unfortunately, such events and such consequences were for America, the commonplace,” — said the expert.

“Get over 95 percent of the votes of African Americans”

The theme of racism really does not lose its relevance in the United States and increases every time the political life of the country aktiviziruyutsya. Undoubtedly, its deliberations not be avoided in the presidential election.

According to a study by Pew Research Center, the election 2020 will be marked by the decline in the share of the white population of America, it will be 66,7% compared to 76% at the beginning of the XXI century. At the same time, the election can vote 32 million Latinos, 30 million African Americans. For the Republican trump to enlist the support of the black population seemed a realistic goal.

“If I become President, then at the end of the four-year period when I will run for re-election, I guarantee you that will receive more than 95 percent of the votes of African Americans,” — said in 2016, the then presidential candidate Donald trump.

In that election, he received only 8% of the votes of African Americans and has since made many efforts to gain popularity among them. Trump has built a friendship with Kanye West, pointed to the fact that the unemployment rate among ethnic minorities has reached a record 5.9%, said other problems facing the black population.

However, to say that he managed to enlist their support is not necessary. All of his successes in the economy and reduce unemployment wiped out by a pandemic of coronavirus, said the head of the Foundation for the study of the USA, Franklin Roosevelt MSU Yuri Rogalev. Meanwhile, African-Americans have traditionally supported Demokraticheskiy party, and Republicans are perceived as enemies, and to overcome this tendency is unlikely.

“Still, if we can say to some extent that black is the electorate Biden, what about the trump we can not say. The vast majority of the electorate is white working men. It is, of course, is to flirt with them, but now the epidemic has resulted in increased unemployment and that to a significant extent, the victims were African-American population. They, of course, Trump will remember this” — said the expert.

The murder of a black citizen by the police in Minneapolis – reason for Democrats and Republicans to update their approaches to the problem of racism. However, as noted by Alexey Naumov, the cure to this problem, American society is still not found.