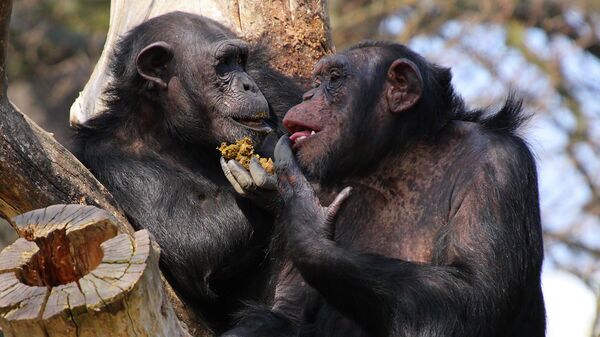 British biologists have found that chimpanzees communicate with each other doing certain movements with the lips, the rhythm of which miraculously coincides with the rhythm of human speech. New research suggests that this is the answer to the question, how did human speech. The results were published in the journal Biology Letters.

Biologists have long and unsuccessfully looking for the beginnings of speech in primates, but all previous studies have focused on the study of the sounds made by apes. The authors of this work suggested that human speech arose not so much in the process of evolution of the sounds, how much was based on the movements of the lips.

It is known that people all over the world, regardless of what language they speak, during a call, open your mouth two to seven times per second, each cycle corresponds to a syllable. The gestures and facial expressions of orangutans, macaques and chimpanzees also experienced some rhythm.

Comparing the video of the four populations of chimpanzees Pan troglodytes: two wild — in Uganda, and two are in captivity in zoos in the UK and Germany, the researchers found that the lips of these primates move with an average of “speech” rhythm four “syllables” per second.

Interestingly, the rhythm in different animals differ sometimes twice. While there were no significant differences in the average speed of lip movements between populations in captivity and the wild monkeys.

The authors suggest that “smacking” of the lips in chimpanzees play the role of the speech and serve to attract attention and communicate their emotions and information. In combination with special sounds that animals make when they groom each other, these rhythmic movements is an important element of communication and social interaction between individuals.

“Our findings support the hypothesis that the ancient rhythmic signals of primates has served to attract attention — are in the press release words of the head of research of Lameira Adriano (Adriano Lameira) from the School of psychology and neuroscience at the University of St Andrews in the UK. — But still this remains speculation until will be received more detailed data on other primates”.

Scientists are planning to conduct such studies, combined with observations of social interaction in populyatsiyakh.

The authors understand that the evolutionary continuity of the appearance of speech in humans from primates is not yet proven, but I believe that the results of their research will help in this matter. Now scientists will be able to track the development of this crucial component of human communication is not only based on vocal, but also gestural elements.