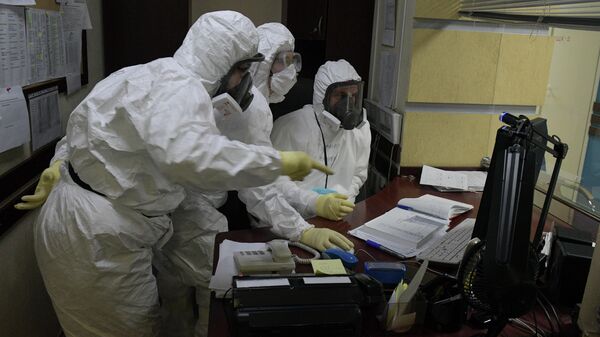 Created by experts of the Russian Federal nuclear center — all-Russian research Institute of technical physics named after Zababakhin (RFNC-VNIITF, Snezhinsk, Chelyabinsk region) model of the coronavirus infection have shown good capabilities in assessing the results of the adopted restrictive measures, but for future prediction, the key issue is the proportion of asymptomatic carriers COVID-19, told reporters at VNIITF.

About the work of mathematicians from Snezhinsk told scientific Director of VNIITF, Chairman of the Scientific-technical Council of state Corporation “Rosatom” academician Georgy Rykovanov Monday in the course organized by MIA “Russia today” online meeting of the Russian Academy of Sciences on the theme “Present and future: modeling exit coronaries”.

In nuclear centres engaged in the development of nuclear weapons, including VNIITF, historically there are powerful mathematical and computational framework that allows one to model complex processes. That mathematics of the Russian nuclear centers involved in forecasting the development of the situation connected with coronavirus infection in April, said General Director of Rosatom Alexey Likhachev.

The specialists of the Los Alamos national laboratory (one of the leading nuclear centers of the United States) on the basis of their calculations came to the conclusion that Russia has passed the peak of the epidemic COVID-19 with a probability of 67%.

As told to journalists in a press-service of the Snezhinsk nuclear center, its specialists have modernized the world’s most popular model SEIRD and at the same time created its statistical model.

What is common infection and a nuclear reactor

“The epidemic is a typical example of a chain reaction. One patient infects several healthy people, those, in turn, a few more and so on. The SEIRD model equations are similar to equations describing a chain reaction in a nuclear bomb or nuclear reactor, so we were clear”, — said the Deputy head of the scientific-theoretical division VNIITF Vladimir Legonkov, which quoted the press service.

According to him, differential SEIRD model is very simple, and its solution depends on the difference of only two fundamental parameters — the speed of infection and the recovery rate: if the difference is positive, then the epidemic grows, if it is negative, it fades. However, the main disadvantage of this model SEIRD is its uniformity, added Legonkov.

In this model, considered the whole human population is assumed to be homogeneous like evenly “mixed”, so “one patient somewhere in Vladivostok successfully, though with low speed, infects all the 15 million people of Moscow”, said the scientist.

Thus, the applicability of the model is limited to the SEIRD populations with tight interaction, that is, the cities, and is not suitable to describe patchy distribution, said Legonkov. Therefore, experts VNIITF has developed a more sophisticated statistical model that takes into account how the various channels of infection, and to a certain extent the foci of infection.

“A statistical model based on known mathematical method Monte-Carlo. In the framework of the calculation is put a few million people less, but also a large number of apartments, next stores, transport units, offices… Each person is tied to a specific apartment, store, office. People get signs of belonging to various social groups — children, students, workers, pensioners”, — said Legonkov. It is believed that some people are hidden carriers of COVID-19.

Next to each person in accordance with the social status of “played” his behavior during the day.

“For example, students spend some time in the family (at home), then, using transport, follow to school, spend six hours there, go home and the rest of the day spend in the family. Pensioners do not drive to work, but visit shops and so forth,” said Legonkov.

At each step, the simulation calculates the probability of human infection, depending on the contact time, the number of infected indoor floor space. According to Legonkova, it is assumed that a person spends eight hours at home with the family hour going to work, nine hours spent at work, the hour goes back home on another transport, for an hour is coming in the store (maybe not every day) and the time remaining to the day again spends at home with his family.

During the day a man can overlap with already infected with the virus, and depending on the occupancy of the room (it can be office, shop, and even subway), and the time spent in this room, the calculated probability of becoming infected. Then randomly with the corresponding probability of “played” the fact of infection, and people can acquire a sign — “contaminated” told of Legonkov.

To give the model more credibility all the running and, consequently, jobs were divided into three groups — small (up to ten people per room), medium (ten-thirty) and large (more than thirty). Similarly, the trading platform was divided into hypermarkets, supermarkets and convenience stores. Their parameters and the number of the city was taken from public statistics for Moscow, which had managed to find online.

As noted in VNIITF, this model, despite some simplification of human behavior, allows design to analyze factors such as, for example, the introduction of restrictive measures in relation to particular social groups or in certain areas of activities (work, transport, shops).

A key factor for predictions

But to reliably model those or other factors, the basis of calculation must be provided with an adequate source of data from population and its distribution by social groups to the availability of different types of transport or stores, said Legonkov.

“In the last days we were approached by representatives of giants such as Sberbank and MTS, with an offer of assistance in obtaining operational and statistical data on some aspects of human behavior and its changes during the quarantine. So, the savings Bank based on the analysis of flow of transactions on plastic cards determines the change of activity of people in the shops, and MTS, using the geolocation capabilities of cellular communication, can give summary information on the movements,” — said the scientist.

Despite the lack of detailed statistical data, was built at VNIITF model showed good predictive qualities noted in the nuclear center were able to accurately predict the epidemic COVID-19 in new York, which is a lot of data was published on the Internet.

As shown by numerous calculations, the key in terms of predicting future developments is the question of the proportion of asymptomatic virus carriers, but to determine this factor directly from the simulation at the moment is not possible, underlined in the nuclear center.

“Each week our group was sent to the leadership of “Rosatom” brief progress reports”, — said Legonkov. According to him, the results of VNIITF interested in the government of Russia. “We were contacted by the head of the modeling group of the office of the Prime Minister. <…> It was recognized that our model is one of the most advanced. We asked for help in the search for some statistics on the infrastructure of municipal economy of Moscow. In the future, the group again approached us with a request to provide the results of our calculations for inclusion in the report of Mikhail Vladimirovich Mishustin,” — said the scientist.