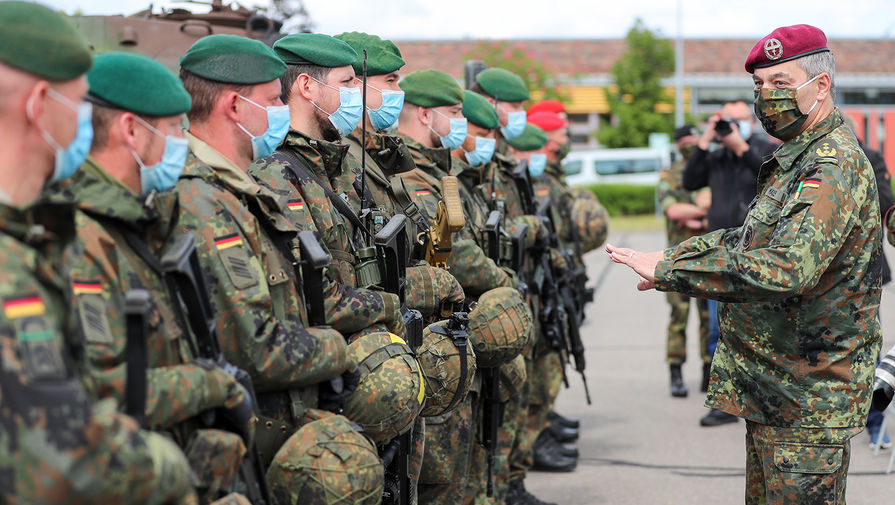 An elite special forces unit of the German armed forces is experiencing a crisis due to a succession of allegations of extremist activities. The discussion of the “extreme right” of the special forces takes place on the level of the government, and the generals aim to eradicate right-wing ideology. Meanwhile, the only far-right German party “Alternative for Germany” is in a state of schism.

Military unit of special purpose of the German armed forces (KSK) is experiencing a crisis due to the discovery in its ranks right-wing extremists, reports The Times citing a senior military source.

In their history the KSK performed the most important and dangerous tasks. Special forces soldiers captured by Serbian commanders during the war in Yugoslavia, participated in the battle for cave complex of Tora Bora on the Afghan-Pakistan border against “al-Qaeda” (an organization banned in Russia).

Recently, however, the reputation of the special forces has been undermined by incidents of accusations of extremism.So, at least 20 military KSK was at the center of investigations on extremist activity. They are accused of intent to kill left-wing politicians, illegal possession of weapons.

According to the newspaper, the soldiers used Nazi symbols and are supporters of the ideas of Adolf Hitler.

Two weeks ago was arrested by one of the sergeants of the special forces who illegally kept an AK-47, 2 kg explosives, smoke grenades and several thousand rounds. The house he had found things with Nazi symbols.

After the incident, the General KSK Marcus Kreitmair sent to each member of the special forces letter, in which he said that part of the special purpose experiencing the “most difficult stage” in its history.

“In our environment was and, obviously, there are people that can be attributed to the so-called ultraprobe spectrum, the letter said Kreitmair. Whether because of their loyalty to the Constitution, their proximity to the Imperial citizens (far-right libertarian movements) or right-wing extremist moods and support of right-wing extremist ideologies, they have caused enormous damage to the reputation of KSK and Bundeswehr [German armed forces] in General, and personally for each of us.”

He also said that the preservation of the reputation and good name of KSK for him remains a top priority, promising to eradicate the forces of extremists.

“I clearly, unequivocally and strongly appeal to all those who may still be in our ranks. Feeling ultraprivate the spectrum, you do not deserve our camaraderie! — he wrote. — You don’t belong to us! You must leave the unit and the Bundeswehr on their own initiative. If not, rest assured that we will find you and remove”.

It is believed that the KSK is more extremist-minded fighters than in other units of the German armed forces. According to some sources — five times. Information about the total number of military in special forces is classified, but, as suggested by The Times, the detachment of about a thousand people.

Meanwhile, the problem has reached the level of the government. Yesterday the Minister of defence of Germany Annegret Kramp-of Karrenbauer gathered meeting for conducting the “structural analysis” of a KSK and a discussion of his “extreme right-wing elements”.

In recent years, at least four soldiers were dismissed from the ranks of the KSK for extremist views. Others, who were suspected of more serious actions, had been arrested or transferred to a less prestigious part of the German armed forces.

The theme of extremism does not lose its relevance in Germany. In the media periodically publish materials describing the incidents of extremism. In parallel, in the center of the scandal was the only right-wing party in the country — the “Alternative for Germany” (ADH).

In early March, the internal security Agency of Germany has announced that intra-party Association ADG-wing “Wing” is right wing extremist. “Wing” was under surveillance last year after the shooting in the German town of Hanau.

The evening of 19 February, a man opened fire on visitors to a first one hookah and then the other. As a result of the incident killed nine people. The Minister of internal Affairs of Germany, Horst Seehofer, said that “crime in Hanau is definitely racially motivated terrorist act”.

After the incident antiplague sentiment in Germany began to strengthen in the centre of the observations was ADH.

Representatives of the party called the recognition “Wing” extremist movement is outrageous. According to members of ADH, this step was done in order to put pressure on the whole party. In General, the statements of its representatives have always been closely monitored.

What is the ruling Christian democratic Union (CDU) is rather aggressive about the presence of ADH in Parliament, for anybody not a secret. The most vivid proof of that was the resignation of the Prime Minister of Thuringia in Eastern Germany Thomas Kemmerich. In his post he lasted less than a day, then resigned. The fact that his candidacy was supported not only by the CDU and the Free democratic party (FDP), which he is a member, but also the “Alternative for Germany”.

“What happened is inexcusable, the result should be canceled,” — commented on the victory Kemmerich with the votes of ADH Angela Merkel.

And soon the FDP and its candidate followed the advice of the Chancellor.

“ADG tried using crafty tricks to harm democracy. We will not go for it,” said kemmery. In a statement, the FDP said that he will resign, to wash away “the disgrace of” support “Alternative for Germany”.

In terms of solid antinationalist rhetoric appeared in 2013 “Alternatives for Germany” no one predicted success. The party initially took an anti-European course, however, the immigration crisis that has shaken Europe, has shifted the priorities of ADG against migrants. Political points, the party won against the background that the policy of open doors Europe accused is Chancellor Angela Merkel.

By the way, the leader of the “Alternative” in Thuringia, björn hake is the most odious of all members of the party throughout Germany. A politician, for example, called the Holocaust memorial in Berlin “monument of shame”, which aroused in his address a lot of criticism and outrage.

The first beginnings of the success of ADG received in 2017, when the results of the parliamentary elections has secured 12.6% of the votes, first came to the Bundestag and the third largest. However, the presence of right populist forces other parties, especially the ruling CDU, cannot get used to it because of the Parallels with Nazism.

ADG’ve found myself at a crossroads: abandon ultra-right-wing views and any associations with them and lose part of the electorate, or to seek a compromise

“ADG has long faced a choice. The party split and has long been in need many members to abandon it. It is an internal process in the party, where the hoot at party congresses against the right wing. But this decision of the party — she needs to crack. It is clear that the right wing has to go, but it’s not coming out. Of course, ADH has raised the question and it is no coincidence that the founding fathers had long since left, and the party exists”, — said the head of the Center for German studies Institute of Europe RAS Alexander Belov