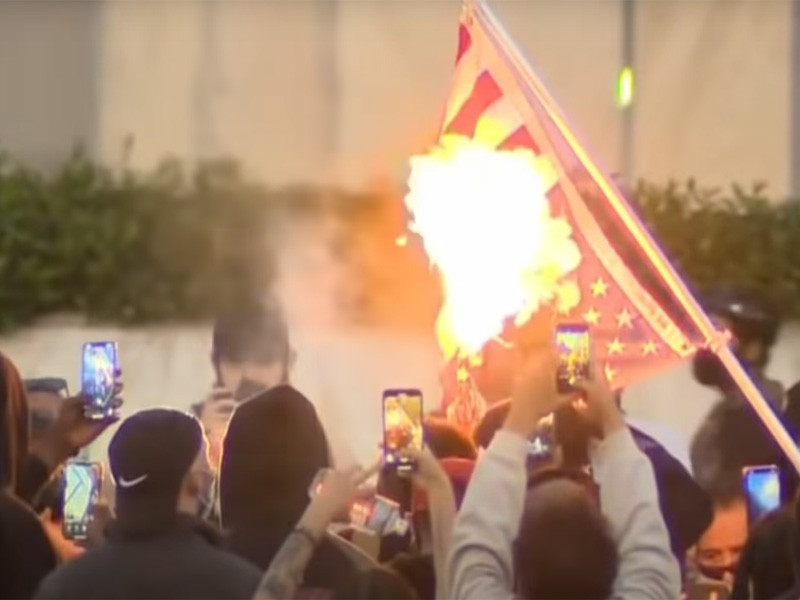 Riot over the death of black American George Floyd during his arrest at Minneapolis (Minnesota), provoked one more death and spread to Los Angeles. According to the Telegram-channel “Military analyst” on the second day of the protests a group of police officers in Minneapolis rammed the SUV. The driver was detained. About victims and victims among law-enforcement officers not reported.

One of the protesters was shot by the owner of the pawn shop because of the aggressive behavior of the protesters, who began to attack and loot shops. The wounded died in the hospital. It is also reported that protesters set fire to a nearby shop auto parts. The mayor of Minneapolis, Jacob Frey asked the head of Minnesota Tim Walsh to enter into the city National guard, according to the Star Tribune.

Protesters throw rocks and bottles at law enforcement officials, break the glass of the police cars, Rob stores. Police, in turn, used against rioters with rubber bullets and tear gas.

In addition, crowds of supporters of the movement Black Lives Matter (“black Lives matter”) gathered in Los Angeles. According to CBS Los Angeles, the rally turned violent after some people smashed the Windows of two patrol cars. Later there were serious clashes with the police, had seen people burning the US flag. It also reported the arrests and the hospitalization of one of the protesters, fallen from the machine. In the police Department were warned about the inadmissibility of illegal behavior, while simultaneously assuring that I share the indignation of society in connection with the case of George W. Floyd.

On the eve of the state were street protests surrounding the death of a black man during the arrest. Judging by the video of the incident, against local resident George Floyd was applied suffocating reception: white COP stepped with his knee on the neck of the victim, which wheezed and said, “I can’t breathe!” The witnesses urged the officer to remove his knee from the man’s neck, indicating that he’s not moving. The detainee remained without motion, after which he was put on a stretcher and taken away in the ambulance. Later it became known that the detainee died.

Of Minnesota police confirmed that the man in the video died as a result of “unfortunate medical case of” when “interaction with the police.” Four police officers fired. Speaking to reporters, the chief of police of Minneapolis Medaria of Arredondo stated that police practice concerning “methods of restraint”, will be revised. The investigation of the tragedy was connected FBI.

According to the newspaper The New York Times article excerpts from which publishes InoPressa, at the beginning of his career, the African – American police chief of Minneapolis has filed a lawsuit against his own Department, accusing the leadership in tolerance to racism. Upon taking office, he promised to improve relations with black residents, but this did not happen.

Public activists demand that the police Department have been reformed, and the officers involved in the arrest and death of Floyd, is officially charged with murder. Against one of these officers, 44-year-old Derek Chauvin, who was previously filed several complaints over its wording and the tone of statements in communicating with citizens. In addition, suture shot a man who was trying to acquire weapons of police in 2008.

According to the police Department, African Americans make up about 20% of the population of Minneapolis, but they more often than white residents, stop, arrest and use force on them. Black people also account for over 60% of the victims of the attacks carried out by the police in Minneapolis from late 2009 to may 2019.

“Between the police forces of the city, consisting mainly of white officers, and the residents there is a deep disconnect that appears to be becoming more and more every murder,” the article says. In 2017, the white woman Beatrice Rusik Damond was fatally shot by black COP, and her family received $ 20 million in the result of an agreement with the city authorities three days later after the officer was convicted of murder.

Two and a half years ago, black Thurman Blevins during fatal collision, captured on lapel video recorder, begged two white police officers approaching him, “Please don’t shoot me. Leave me alone”. His death led to protests throughout the city.

One of the activists recalled that 20 years ago was also subjected to harsh treatment, when a police officer pinned her to the hood of the car, Peredovik her neck with his forearm so that she could not breathe. And her brother five years ago, was shot and killed during clashes with the police then the protesters camped outside the police station, stayed there for 18 days and were outraged when the police destroyed their camp at the direction of the city. In addition, community members indicate that most police don’t live in the city, and do not understand the psychology of the communities that they patrol.