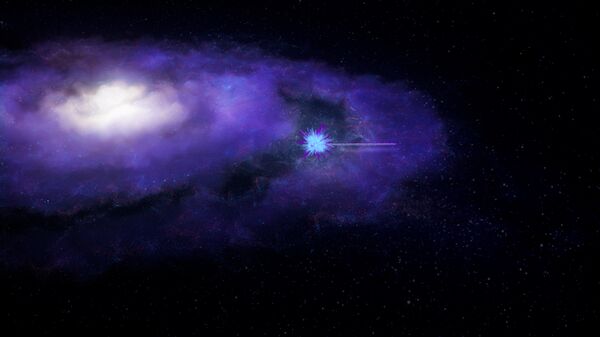 Studying a mysterious radio pulses sent from distant galaxies, astronomers realized that the “missing” matter that scientists have searched for nearly thirty years and is dispersed in space. The study is published in the journal Nature.

Theoretical models of the Big Bang quite accurately predict how the substances formed during this event, which gave rise to our Universe. But all known space objects give a total of no more than half this mass. Therefore, three decades ago, physicists have predicted that somewhere in the Universe there is no “missing” part, and astronomers are actively searching for this “missing” matter.

The authors of the new study — by researchers from Australia, USA and Chile under the leadership of Jean-Pierre Macquart (Jean-Pierre Macquart) from the Australian International centre for radio astronomy research ICRAR — used searches for fast radio bursts — recorded by radio telescopes powerful single radio pulses of unknown origin.

These short flashes come from different parts of the sky for no apparent regularities and last only a few milliseconds. During this time they realize the enormous energy emitted by the Sun is equal for several thousands of years.

Scientists never know where once again expect to see fast radio bursts, they are difficult to detect using traditional techniques and telescopes, so observations, the authors used the ASKAP radio interferometer Observatory “Murchison” in the West of Australia.

“ASKAP has a wide field of view, approximately 60 times of the full moon, and can shoot in high definition — presented in the press release ICRAR words of one of the authors of the study Ryan Shannon (Ryan Shannon) from Swinburne University of Technology. — This means that we can relatively easy to catch the spikes, and then with incredible precision to determine their location”.

“When the telescope comes splash, it records it live for fractions of a second, — continues other author, Dr. Keith Bannister (Keith Bannister) from the Australian national science Agency CSIRO, which has developed a system of taking pulses used in this study. It allows you to determine the location of the flash with accuracy equal to the thickness of a human hair at a distance of two hundred meters.”

Knowing the distance to the light source and the degree of scattering of the beam by processing the data of all six radio bursts, scientists were able to determine the density of the Universe. It turned out that all matter is lost in outer space between stars and galaxies, but in a very diluted form.

“Intergalactic space very poorly “normal” stuff, says Marquart. — Its density is equivalent to one or two atoms in a normal office room.”

Unlike dark matter, which makes up about 85 percent of all matter in the Universe still remains elusive, “missing” baryonic matter fully, that is composed of normal protons and neutrons, forming stars, planets and all physical objects of the familiar world.

Scientists hope that after the beginning of the new, the world’s largest radio interferometer SKA (Square Kilometre Array), they will be able to observe more of the fast radio bursts that will enable them still better to explore the invisible part of matter in the Universe.