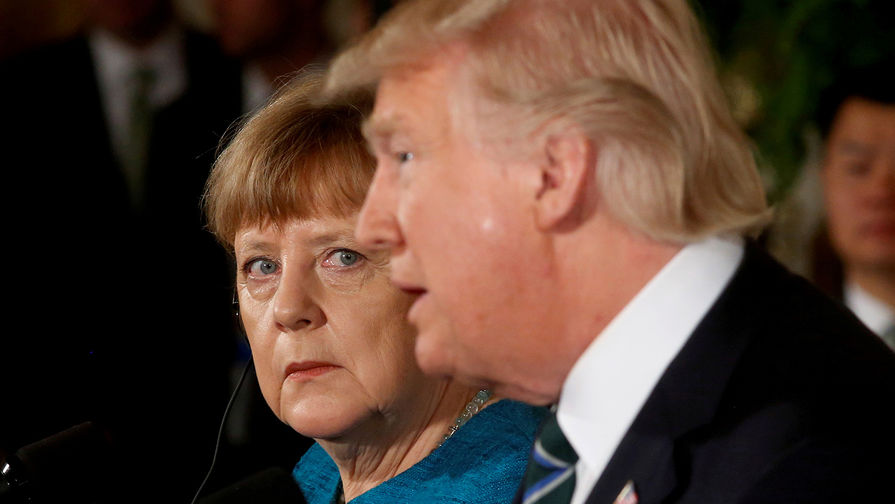 Donald trump has decided to postpone the fall of the G7 summit, which he sought to symbolize the return to normal life after a pandemic coronavirus. From participating in the meeting refused earlier, German Chancellor Angela Merkel. This decision followed a disagreement between the leaders on several issues, including in relation to the export gas pipeline from Russia to Europe under the Baltic sea “Nord stream — 2”.

The US President Donald trump has postponed the G7 summit in the fall. It happened two days after Chancellor Angela Merkel turned down his invitation to take part in the meeting of leaders “the seven”.

“The Federal Chancellor thanked the President for trump’s invitation to the G7 summit in late June in Washington. Today, given the overall situation with the pandemic, it could not agree to their own participation in the trip to Washington,” — said the press Secretary of the government of Germany Steffen saber edition of Politico.

Trump, indeed, has scheduled a summit for June. However, before he took the decision to postpone the event to the fall and the announcement of the President sounded with a share of resentment.

“I’m putting it off because I don’t feel that the G7 adequately represents what is happening in the world,” said the US President told reporters.

The G7 summit scheduled in the United States, was to become the first diplomatic event where world leaders would meet in person after months of restrictions due to the coronavirus. And for the head of the White house it was quite an ambitious and important plan. To host the members of “seven” — better signal to the world that the United States has successfully coped with the pandemic and was ready to be first in combating the effects of coronavirus.

“Now, when our country “back to greatness”, I’m thinking of moving the G7 in the same or a similar date in Washington, DC, in the legendary camp David. Other participants also start their comeback. This would be a great sign for all — normalization!” — trump wrote in his Twitter on 20 may and started sending invitations.

But the Prime Minister of Canada Justin Trudeau has said that while it cannot commit themselves to attend the meeting because of fears about the virus and the canadian quarantine rules.

The British leader is the only invitee who is already infected with a coronavirus.

Meanwhile, Angela Merkel, who in July will be 66 years old, is the second-highest leader of the G7 after the tramp, who is older than her eight years. In addition to the risk of age-included the Prime Minister of Japan, who, unlike Merkel, is not afraid to be infected by the coronavirus during the flight and a personal meeting with the other leaders and members of their delegations, although Japanese media has said that the Prime Minister and his entourage will have to be in quarantine for 14 days after returning to Tokyo.

However, in the USA, all concerns were denied.

“We will protect the world leaders who come here, just as we protect people in the White house. So we want that to happen. We think that this will happen. And still, foreign leaders very much support this idea”, — said earlier the press Secretary of the White house Keighley Makineni.

However, there is also the possibility that the refusal of the Chancellor justified not only by its concern about the health. Angela Merkel, indeed, demonstrated a very responsible approach and precaution during a pandemic, which is also reflected in the epidemiological situation in Germany, characterized by relatively low mortality rates compared to other European countries.

However, at the same time, to underestimate the political influence of the Chancellor on the world and, in particular, venues such as the G7, is not. Her refusal thwarted attempts by trump to present the summit as a landmark moment, the lead line under the prohibitions and restrictions on travel.

Equally important, the rejection by the Chancellor of the invitation was yet another in a long series of contradictions between the two leaders. In recent years the relations of Donald trump and Angela Merkel are tested for strength, as politicians find constant cause for recriminations.

So, trump criticized Merkel for defence spending of Germany, stating that Germany does not pay “their fair share” in the framework of its commitments to NATO. The Chancellor of Germany, irritated by the selfish approach of the us President on the external direction, for example, US withdrawal from the agreements in the security sphere (DRM, DON, and especially AGREEMENT, which EU leaders are faced with the need to protect Iran’s economy from sanctions of the USA).

With the differences faced leaders this week in a telephone conversation on several topics: NATO, the construction of the pipeline “Nord stream — 2” relationship with China, reports Politico, citing a senior U.S. official.

This week, the U.S. Ambassador to Germany Richard Grenell confirmed Washington’s intention to introduce new sanctions against the “Nord stream — 2”. “New sanctions are approved by all parties. Despite the election campaign, the process of adoption of the bill can be very fast,” said Grenell newspaper Handelsblatt.

China is now one of the most important to trump. Relations between Washington and Beijing are on the verge of the cold war, the reasons for which it is enough: the charges of the U.S. against China in the spread of coronavirus, the White house demands to investigate this question, commercial relations and finally, the situation with the protests in Hong Kong.

It is likely that trump wanted to enlist the support of Europe and to speak out against China’s one front, but Merkel refused it. Sources Politico reported that trump was furious unwillingness of Merkel to attend the summit, and after talking to her he called the Makron.

“President trump and President Makron discussed progress in the fight against coronavirus and the opening of the world economy. The two leaders agreed on the importance of a personal meeting of the group of seven in the near future,”

the statement of the White house.

Don’t underestimate the influence Merkel on the European space. Anger trump can be caused not only by the fact that she declined the invitation, but also the fact that her decision could affect the rest of European leaders. One of the sources for Politico said that other EU leaders support Merkel and will not participate in the G7 summit, if the Chancellor thinks it is a bad idea.

However, Merkel has indeed shown great caution in the matter of health. So, the German Chancellor, for example, reacted negatively to the idea of the EU summit in Brussels on 19 June. In the European Union believe that the discussion of the next seven-year budget, including pandemic coronavirus should only be conducted in person and as soon as possible. However, for the Chancellor, apparently, the precaution was even more important.

As a result, the trump still suffered the G7 summit. Now he will have to find another, not less significant reason to celebrate the return to normal life. Meanwhile, the White house has already figured out how to make the leaders of “seven” in the autumn in the USA with equal panache.

Trump said that the summit should invite Russia, South Korea, Australia and India. Director of White house strategic communications, Alyssa Farah said that the President, among other things, wants to discuss in this expanded format, “the future of China.”

In Belarus, the coronavirus identified from 3.6 thousand children

In Belarus, the coronavirus identified from 3.6 thousand children

New virus outbreak in the U.S. killed thousands of rabbits

The Victory parade on 24 June, the fight with trump Twitter, the pogroms in the United States: what to write telegram channels

The NSA warned that hackers GRU continue to hack email