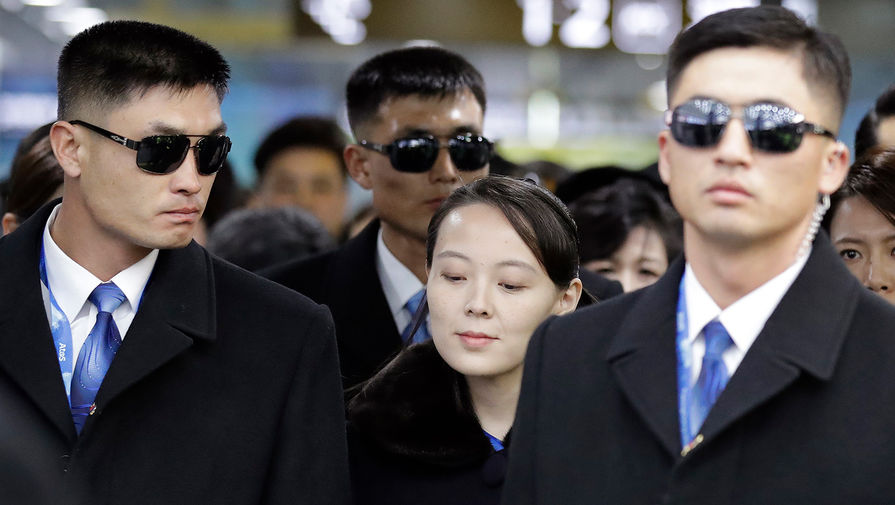 DPRK raises the stakes and pledged to return its troops to the areas from which they were derived by inter-Korean agreements. Pyongyang has already managed to blow up the inter-Korean liaison office in Kaesong. Is he Kim Jong-UN is still silent, and face antirealism of the campaign was his sister Kim yo-Jong.

North Korea plans to send troops to the areas from which they were derived by inter-Korean agreements, to strengthen the front line, reports (KCNA).

The General staff of the people’s army of the DPRK has announced that it is monitoring the situation in connection with the deterioration of relations with South Korea. The statement also reported “readiness to support any decision of the party and government by military means.”

“We will prepare plans for military action”, — reported in the General staff.

16 June the North Korean military blew up the communications center in the city of Kaesong, which was used for talks with South Korea. Although the building is located on the territory of the DPRK and it did not work the representatives of Seoul, this gesture is quite symbolic.

Central television of the Republic said that the leadership destroyed the building, as “angry people” were determined “to get the dregs of society and those who harbour them, to pay dearly for their crimes.” Probably, the report refers to the North Korean defectors who were distributing anti-government leaflets across the border.

Also the newspaper reported that Pyongyang covers all government and military communication channels with South Korea and may abandon a bilateral peace agreements reached during the three meetings of the President of the DPRK Kim Jong-UN and South Korean President moon Jae-in in 2018.

Node connection was closed from the end of January due to pandemic coronavirus COVID-19. The building was built with funding from Seoul. It was the first point of contact between the two countries since their separation in 1945 and was considered a symbol of the politics of interaction.

Its destruction was followed by a rather sharp statements of the first Deputy head of the Department of the Central Committee of the workers ‘ party of Korea (WPK) Kim yo-Jong, sister of Kim Jong-UN. 13 June, she said that Pyongyang will make the next step against South Korea for its treachery and crimes against the Communist regime. Kim Jeong also added that the country’s army is mandated to plan and to take any necessary in this direction.

“I feel that the time has come to break with the authorities of South Korea. We will soon take the next step, ‘ said Kim Yu-Jeong. — Using his power, sanctioned by the Supreme leader, our party and government, I directed the Department responsible for relations with the enemy, determined to take the following action.”

The announcement was made a week after she threatened to break all ties with Seoul, saying that South Korean activists and North Korean defectors are sending to Pyongyang a propaganda of anti-government leaflets.

“It is obvious that the South Korean authorities will be forced to pay a high price if they allow this situation to continue, excuses” she said in a published June 11 statement.

In Seoul have already announced plans to ban the distribution of leaflets at the legislative level. Despite this, Pyongyang has stopped responding to any attempts by South Korea to hold talks.

“Every day more and more amplified the unanimous voice of all our people, requiring that they certainly evened the score with the mob for outraging and insulting the absolute authority of our Supreme leader, representing our country, her great dignity,” said Kim yo-Jong in a statement.

She also reported that the North Korean army is ready to take the next step, which will calm “the indignation of our people and will certainly exercise it.”

“It’s better to take a series of retaliatory actions, instead of releasing such statement to those who are hard of hearing may mistakenly see as a “statement of threats” or from which they can make any cheesy comments about our intention,” — said the first Deputy head of the Department of the Central Committee of the WPK.

Statement of Kim Yu-Jeong has sounded next day after the head of the United front Department of the North, said that Pyongyang has lost all confidence in the South Korean government and warned of “sad” and “painful” time for Seoul.

“If the South Korean authorities now have the opportunity and courage to do what they failed to do over the last two years, why the relationship between North and South are still at an impasse as now,” she added.

The explosion of the communication is probably the most provocative step North Korea has made since then, as spring of 2018 Pyongyang officially suspended missile and nuclear tests.

The current line of Pyongyang will undoubtedly be a serious obstacle to inter-Korean interaction.

Despite the fact that the situation with the spread of anti-government leaflets, of course, causes irritation of Pyongyang, the reason why the DPRK began to strain relations with Seoul, is not only this, noted in conversation with “Газетой.Ru” senior researcher, Center for Asia-Pacific studies, IMEMO ran, Oleg Davydov.

“The North Koreans have long been not satisfied with the state of Affairs in inter-Korean relations. As is known, in accordance with the declarations which have been adopted North and South Korea, in 2018 at the highest level, the sides agreed on the broad development of inter-Korean cooperation is the restoration of roads and Railways in the DPRK, the establishment of joint economic zones, technology parks and tourism,” — said the expert.

However, in fact, these agreements did not bring Pyongyang expected returns. As you know, the dialogue between the US and the DPRK on the nuclear issue have stalled, and North Korea still continue to operate extensive international sanctions.

“This situation has effectively precluded the implementation of inter-Korean projects. In these circumstances, the North Koreans seem to have come to the conclusion that relations with South Korea not bring any result, first of all, in terms of addressing pressing economic and financial problems of the DPRK. In these conditions, they may have thought it best to slam the door,” — said Oleg Davydov.

On the other hand, escalation of tensions and provocations — this is a favorite technique of the North Koreans, through which they seek to attract international attention in order to achieve certain concessions.

“The situation in the North Korean economy is deteriorating, according to some estimates, up to 90% of revenues from North Korean exports declined because of sanctions. In these circumstances, Pyongyang may have felt it necessary to remind myself, starting with the aggravation of inter-Korean relations, which could be a prelude to a new round of confrontation on the Korean Peninsula. If so, then “messedzh” Pyongyang would be addressed not only Seoul but also Washington, a policy which in the DPRK is considered as the main obstacles to the lifting of sanctions,” — said the expert.

Meanwhile, the deterioration in inter-Korean relations it is noteworthy that a tough stance of Pyongyang is not the Kim Jong-UN, and his sister. From the North Korean leader while comments were received.

“First, the sister of Kim Jong-UN is part of his inner circle is the person he fully trusts .In addition, in the past it has established itself well in the process of establishing inter-Korean contacts in early 2018. Now the situation has changed and she apparently had finally “to dot the “i”. As for the Kim Jong UN — in this situation he seems to have felt inappropriate for themselves personally to deal with any issues related to inter-Korean relations, delegating all the powers of one floor below,” — said the expert.

Chinese Baoding martial law due to the outbreak of coronavirus