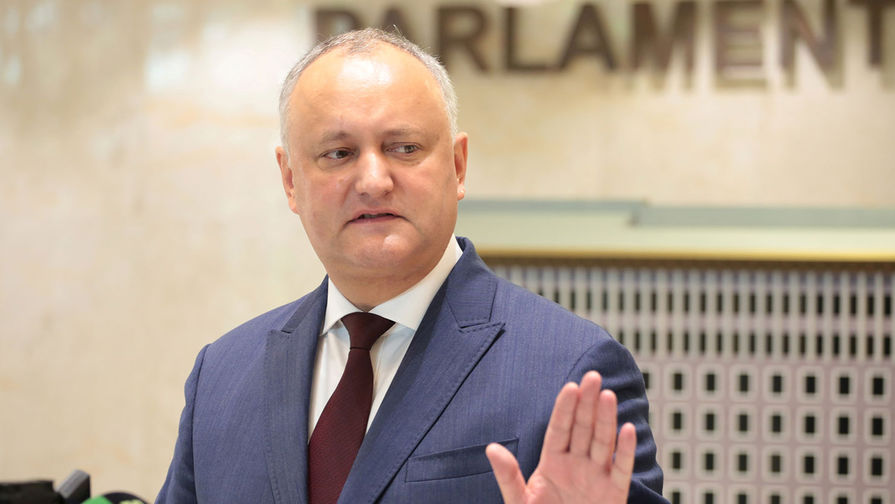 Moldovan opposition won the majority in Parliament. It happened because of the split in the Democratic party, whose deputies began to move in opposing factions. Authorities believe that behind this process are fugitive oligarchs who are trying to return to politics in the country.

The coalition government in Moldova has lost the parliamentary majority. In supporting the policy of the President Igor Dodon Union of the party of socialists of Moldova (psrm) and the Democratic party of Moldova (PDM) are now only 50 deputies in the 101-seat Parliament.

The weakening of the coalition was the rift in the democratic party: for several months the faction of the party leaving the deputies, turning into the ranks of the competitors from opposition groups, Pro-European deputies of the Pro Moldova. The latest “defector”, which has deprived the ruling coalition of the parliamentary majority, became a lawmaker Euphrosyne of the Grets.

Only the opposition moved 16 deputies from the faction of the democratic party.

President Igor Dodon, commenting on the situation, notes that while the government “still has a fragile majority by government support of one independent member”.

“If it’s MPs from the parliamentary majority, is likely to be a minority government (without the support of the majority in Parliament) or the acting (in the case of a vote of more than 51 members for the resignation). But in both cases the head of the government will ion chicu”, — he described the future scenario in comments to the Agency Sputnik.

Meanwhile, the desire to overthrow the government of the ion chicu called the leader of the Pro Moldova, Andrian CANDU, has provoked a split in the democratic party. The formal cause is unsatisfactory work of the Cabinet to counter the pandemic coronavirus COVID-19 and economic crisis.

Call the candidate was supported by many opposition members, including former partners of the socialists in the government of the right bloc ACUM, as well as deputies from the party “shore”, whose leader, tycoon Ilan Shor is hidden from the Moldovan justice in Israel.

The candidate emphasizes that the consolidation of the deputies is needed only for the resignation of the current government, not the formation of a new Cabinet.

This suggests that the new government in the near future is unlikely to be approved, and the country will come to new early parliamentary elections.

It is not excluded that this crisis will affect the President’s power. On 18 may the Deputy Alexander Slusari from the block ACUM declared intentions of the opposition to begin procedure of impeachment of the President. The occasion was a video of negotiations of Dodon and subsequently fled the country by the oligarch Vladimir Plahotniuc in June 2019. At that time he was the head of the democratic party.

“Map Plahotniuc” plays and the Dodon. Commenting on the recent events on his page in Facebook, he said that thus disgraced oligarchs are trying to return to power, thereby avoiding criminal prosecution in their attitude.

“I think the biggest challenge for a healthy political forces in the Parliament is different: not to allow oligarchic group plahotniuc — shore CANDU to take back control of the authorities and to take over the country”, — said Igor Dodon.

To achieve this goal, the President is ready any methods.

In particular, it allows negotiations of his loyal party of socialists with the democratic party and the opposition parties of “Action and solidarity” and “Dignity and truth”. He promised to support the new government if it is formed with the participation of these parties without the help of loyal oligarchs deputies.

“As President, I will provide all necessary assistance to the anti-oligarchic parties, as they did a year ago, and will support any solution which will ensure the stability and security of the citizens”, — he promised.

But now the President himself is under attack. As noted in conversation with “Газетой.Ru” the expert of the International Institute of humanitarian and political studies Vladimir Bruter, the ultimate goal of this campaign is to be Igor Dodon:

“Washington has made it clear: the USA does not see Dodon leader of the country, do not accept their assigned government”.

According to Moldovan legislation, after the government has resigned, a new Cabinet must be formed within three months. Otherwise automatically declared new elections.

However, this fall, to be held in Moldova presidential elections, he suggests to conduct the voting process on 1 November. The legislation provides that between elections at the national level, should take at least six months, respectively, if there is a need for early parliamentary elections, they will have to wait until spring 2021.

As noted by Vladimir Bruter,

in the current situation, early parliamentary elections, first and foremost, beneficial for the President of Dodona.

“Dodon is in a dead end. He’d be happy to hold early elections, but can’t. In addition, these elections will not bring him the most. The situation is rather more complicated. On the other hand: it is a way out of the current impasse,” — said the expert.

Most likely, the President expects that the opposition will also fail to form a government. “It will be difficult. Even if they create a minority government, it will be unsustainable,” says Bruter.

In General, according to experts, early elections are not the obvious solution to the crisis in which the country finds itself. They can be beneficial to certain politicians, but for everyone else they will bring nothing new — the balance of power in Parliament will be about the same as it is now.

How to make ESR meter with their hands