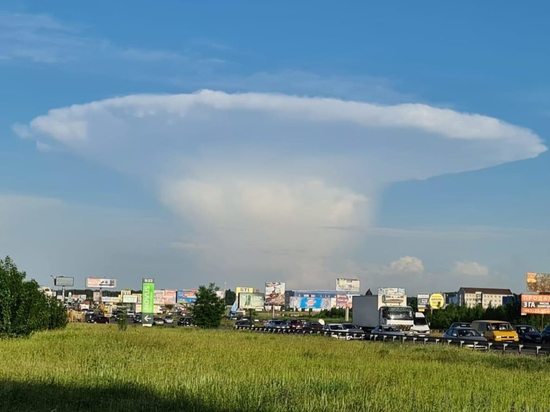 On Friday evening over Kiev there was a huge cloud, in form resembling an enormous mushroom. And, despite the wind, it didn’t move. Many users posted photos of the phenomenon, and some expressed fears that this may be related to industrial activity or even a UFO.

“I was thinking that we fly to save aliens, Many thought that the UFO”, “Like a UFO… maybe the aliens from another galaxy….?” – partly ironically and partly seriously spoke Ukrainian users.

However, on the page of the State service of Ukraine on emergency situations the message that to fear what is happening is not worth it. This phenomenon is called “anvil”, these clouds are formed very rarely. “Rarely found and formed on the crest of windy waves that occur as a result of overcoming the obstacles of wind,” according to the civil service. Previously, these clouds was seen in Vinnytsia, Kyiv and Ternopil regions, the report said.

“Confess, who have time to get scared?” asked presented emergency situations of Kiev.

German prosecutors have formally charged the killer khangoshvili, calling the customer authorities of the Russian Federation

Improved ceramics will help to accelerate the growth of plants

Expert: up to 70% of tigers in China at the same time live in Russia