Self cure razvalivshis throat or tooth can now Russian members of the International space station with the help of special computer programs and accompanying medical packing with drugs. Scientists of Institute mediko-biological problems RAS launched to the ISS multi-year experiment “ENT”. Details said a senior researcher of IMBP RAS and experiment Irina Popova. 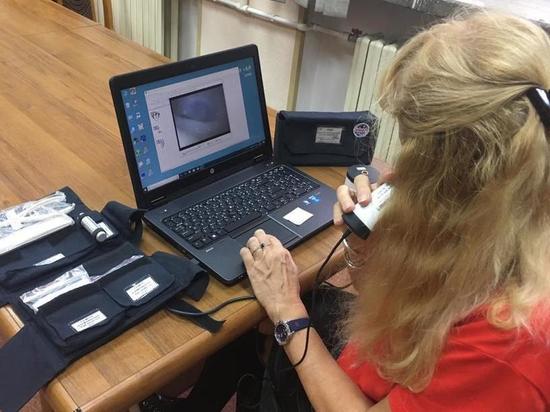 – The full name of the experiment, which runs through the code “ENT” sounds like: “a study on the status of ENT-organs, periodontal and hard tissues of teeth in astronauts in space flight conditions,” – explains Popov. We started it in April, when he arrived the current Russian crew of Anatoly Ivanishin and Ivan Wagner. After two or three days we have already held the first session.

By the way, this experiment was not born in a vacuum. In 2006, the Institute of biomedical problems, according to Popova, has already conducted a study under the code name of BIMS (onboard integrated medical system), which was devoted to the study of ENT organs, skin and partly dentistry. It experts first worked out methods and equipment. All of this has shown its effectiveness. In the process of the experiment had even truly treat the teeth and ears of our astronauts on Board.

Now the results of the previous experiment, there was a more specific equipment for the treatment of ENT-organs and periodontal (complex of tissues surrounding the teeth, teeth, oral mucosa).

In “lore” for the first time use only Russian equipment and its software.

– Probably, the Americans also have such equipment?

– Is. But ours is no worse, and some of its components even surpass the Western counterparts. For example, the interface of our program much easier, we have made it themselves, given to the astronauts was interesting, clear and easy to work with him.

– Tell us how an astronaut can bring himself to examine?

Given the fact that the last time our guys can fly on one, we’ve really updated the system with the expectation of an independent examination of the mouth, throat, nose and ear. The equipment, in the ordinary Cabinet ENT doctor, provided with good led light. What “sees” the camera appears on the monitor. Only not in a normal scale, but enlarged so you can see all the possible nuances. A video and pictures allegedly affected organs immediately sent to the Ground. In the case of identified pathology to the cosmonaut on Board on the closed channel will immediately receive a letter of recommendation about what medicines should be extracted from the onboard first aid kits and medical treatment.

– How often the crew resorted to the in flight?

According to the experiment plan, this should happen about once a month. But in the case that a crew member will feel some discomfort, inflammation, it needs to be examined immediately. When in previous years we only practiced dental self-help, the crew is very often used by hardware-software system to examine your teeth. Good that they are honest and I admitted it in a conversation, and we duly sent into orbit spare halogen lamp.

– How often and why are the teeth and the periodontal conditions of space flight?

– Teeth and periodontium are very dependent on the state of the entire skeletal system, which is known to be one of the first to suffer in weightlessness. Therefore, more often than on the Ground, broken enamel, fillings fall out, tooth decay occurs.

Astronauts can even seal your teeth?

– Early in the packing has been filling material. Now it is not welcome, yet the closure of the cavity of the tooth, which is made not by professionals, is fraught with inflammation.

The experiment will last for several years – until 2024. If the program maintenance of the ISS will be extended, work will continue and “ENT”.