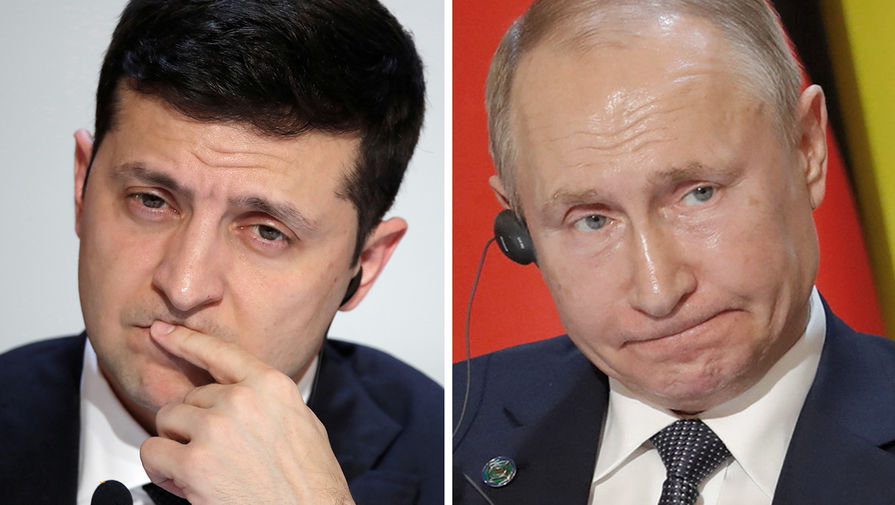 The deterioration can wait for Russian-Ukrainian relations because of the position of Vladimir Zelensky on the role of the USSR in the Second World war, said Russian President Vladimir Putin. Earlier, the Ukrainian leader called the Soviet Union one of the States, unleashing a military conflict. Putin also recently published an article about the lessons of history.

The words of the President of Ukraine Volodymyr Zelensky about the Second World war may adversely affect Russian-Ukrainian relations. This was stated on air of TV program “Russia. The Kremlin. Putin” on the channel “Russia 1” Russian President Vladimir Putin.

“I think for the Vladimir Alexandrovich nothing good is not. Mean that Ukraine itself suffered greatly during the Second World war,” — said the Russian leader.

According to Putin, Zelensky in your own words harms including the Ukrainians themselves. “To belittle the importance of what has been done by the Ukrainian people during the great Patriotic war, and that is exactly what was done, unfortunately, the current President of the country, is causing serious moral wound to all who cherish the heroic past of the Ukrainian people”, — said the Russian leader.

We will remind, in January, during an official visit to Poland Zelensky was blamed for the outbreak of the Second World war including the Soviet Union, the successor of which is Russia.

The Ukrainian leader said that the war resulted in “a conspiracy of totalitarian regimes”, and the Polish government felt it first. Because of this, Zelensky added that the Nazis “launched deadly flywheel of the Holocaust.” In addition, he said, Europe and the world do not have the right to remain silent “in 1939”.

Thus, the reasoning of the liberation of Auschwitz by Soviet troops, Zelensky only said to participate in the operation of the soldiers-Ukrainians.

According to the President of the Russian Federation, he was forced to prepare this material, as the current generation of politicians is responsible to the past and the future, to do everything possible so that this terrible tragedy is not repeated.

The Russian leader has engaged in a polemic with a number of European politicians who are trying to present a key event, followed by a war, the conclusion of the Molotov-Ribbentrop Pact. This, in particular, say Polish politicians.

“I would like to reiterate an obvious fact. The root causes of the Second world war, mainly connected with the decisions taken after the First World war. The Treaty of Versailles became a symbol of the serious injustice done to Germany. He meant that the country had to be ripped off, forced to pay huge reparations to the Western allies, which sapped its economy”, — said Putin.

In his opinion, it is the national humiliation of the people of Germany has become fertile ground for the growth of radical sentiments in the country. The Nazis cleverly played on the emotions of the people who wanted liberation from “the Versailles legacy”. The combination of these processes, in fact, pushed the Germans to war is reminiscent of the Russian President.

“Paradoxically, Western countries, especially the United Kingdom and the United States, directly or indirectly contributed to this. Their financial and industrial enterprises actively invested in the German factories producing military products,” — says Putin.

A problem for international relations is the “Versailles world order”, established in Europe after the First World war. The newly defined state gained new borders, which caused the appearance of a succession of territorial disputes and mutual claims.

Not helped in resolving this situation and based on the outcome of the war beginning of the XX century, the League of Nations — instead of real cases she literally drowned in meaningless discussions and failed to prevent many wars.

Putin said about Poland, which, along with Germany were engaged in the partition of Czechoslovakia. Warsaw and Berlin have agreed in advance together, to whom and what the Czechoslovak land will depart.

“Today, the European policy and, in particular, Polish leaders want to cover up the Munich agreement under the carpet. Why? The fact that their country once had breached its obligations and supported the Munich agreement is not the only reason. Another reason is that a little awkward to remember that in those dramatic days of 1938 the Soviet Union was the only one who came to the defense of Czechoslovakia” – he concluded.

We will add that the new Ukrainian government under the policy of “decommunization” and of removal from Russia even abandoned the celebration of Victory Day on may 9 instead, “according to the Western model,” they note officially on 8 may, the Day of Memory and reconciliation.

Grill-grill, which will be most welcome in the campaign and in the country