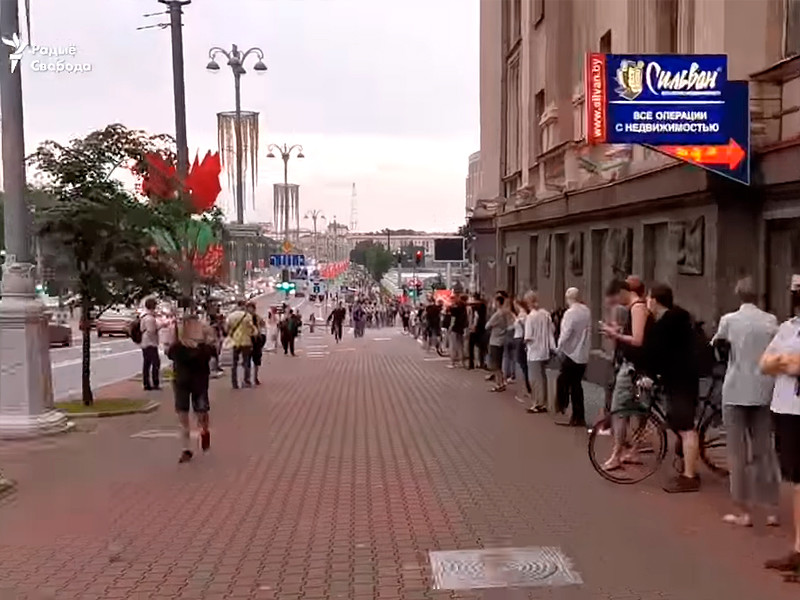 June 18 after the arrest in Minsk of the former head of Belgazprombank and the candidate for President Victor Babariko the pickets, collecting signatures for potential candidates, started the “chain of solidarity”. The circuit should show how many caring people in the country, writes news.tut.by.

The action started at 18:00 on the platform at the Belarusian state Philharmonic society, 22:00 chain got to Independence square.

“Stay sofa warrior and commentator on YouTube a little, it’s time to show that we really 97% of those who want change in the country, free elections and a better future for our Belarus”, – said the organizers.

On the Boulevard Mulyavin journalists noticed a parked black Ford Transit minibus with policemen in mufti and two buses with police officers in uniform. The traffic police blocked the Independence Avenue.

When people (the majority in masks and distancing) began to be built along the Avenue, the police patrolled the place, and their colleague in mufti asked the people to stay close to the buildings. Passing drivers honked in solidarity.

People continued to stand in the chain after midnight. Closer to midnight, the protesters began to disperse.

Babarika was arrested on the morning of 18 June, when together with his son Edward Babariko went to the CEC to hand over the collected signatures. For his nomination as a presidential candidate signed up about half a million Belarusians.

Victor Babariko and his son Edward on the morning of Thursday was taken to the financial investigation Department. They give testimony in the “case of Belgazprombank”. In the house of the presidential candidate was searched.
“Babariko arrested in connection with the fact that he was the direct organizer of illegal activities, attempted to influence witnesses, to hide the traces of earlier committed crimes and just recently to remove a large sum of money from accounts controlled by him”, – said the head of the state control Committee Ivan Tertel. According to him, are checked, among other things, fraud with bills in excess of $ 60 million, which for foreign account was withdrawn a large sum.

June 11 opened a criminal case against current and former employees of the BGB, which Victor Babariko led for 20 years. According to Babariko, in this case, which he regards as an attack on himself and an attempt of political pressure, were detained two dozen people. The potential rival of President Alexander Lukashenko in the presidential election in August, procedural status in the case had not.

Belgazprombank has been operating in Belarus since 1990. “Gazprom” and Gazprombank owns 49.8% of the shares of the Bank.

Babariko was the head of Belgazprombank, from mid-2000 to may 2020 when he announced his intention to run for President of the Republic.

Most of the detainees in the case of Belgazprombank cooperate with the investigation and give grateful evidences.

Presidential elections in Belarus scheduled for 9 August. Alexander Lukashenko, who rules the country since 1994, is running for a sixth term.

In recent weeks in different cities of Belarus, held a mass rally of opposition supporters in support of other possible candidates. Several activists, politicians and bloggers were arrested and were arrested to 15 days. The authorities accused them of participating in an unsanctioned performances.