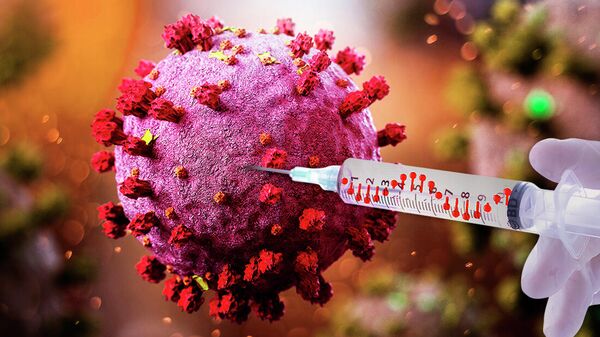 Tatiana Pichugina. The world health organization by the beginning of June has registered 136 candidates for vaccines against SARS-CoV-2. Ten — stage clinical trials. Where are the leaders and who are tipped to win, figured RIA Novosti.

What are the vaccine

When the virus or bacterium enters the body, the immune system activates b – and t-lymphocytes that kill pathogen infected cells. This trigger mechanism of a vaccine that prepare us to encounter the infection, including coronavirus.

Vaccines are divided into two large groups: those that are a single viral particle — weakened or killed, and those where only active part of the virus. A lot of options. You can do the injection of the viral protein, which reacts immunity (subunit vaccines). Or deliver into the body one or two key gene, attaching them to the genome of another, pre-neutralized virus (vector). Or packaging containers in the artificial viral DNA and RNA and also to introduce them into the blood.

A significant part of the list who is a DNA/RNA vaccine. To synthesize them is relatively simple — you do not need permission to work with dangerous viruses, as in the case of live vaccines, which dramatically expands the range of laboratories. Theoretically faster and cheaper to establish industrial production is also important, because an effective drug must be available for all. 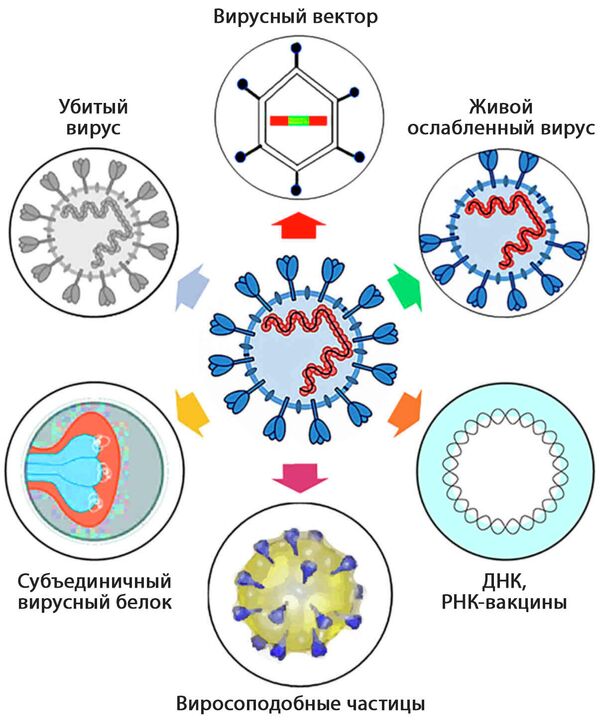 Viral particle of SARS-CoV-2 bears on the surface of the crown of S-protein (as the spike — thorn), which, through the cell membrane trigger inside the RNA of the pathogen.

S-proteins are immunodominant antigens, i.e., molecules that our defensive system recognizes as enemies. Their destruction involved antibodies. Why not make a vaccine from only the S-protein, excluding all superfluous? It is possible to produce it in the laboratory, clean up and prepare the injection. This is the principle of subunit vaccines.

Another way, hypothetically, more simple, to make our cells produce the antigen. To do this, enter the body of matrix RNA, which are synthesized only S-proteins or their fragments, and then they will react the immune system.

Even more advanced variant — self-replicating RNA, or sank. It carries information not only on the antigen but also on the enzymes polymerase that her copy. Such a molecule design, for example, on the basis of the genome of the alpha-virus, clean out all the junk and incorporate a portion of the genome of SARS-CoV-2, encodes a protein spike.

“So long RNA entering the body, synthesizes and antigens, and polymerase that then copies the entire structure. Thus we increase the time of action of the vaccine and reduce the initial dose. But there are General to all RNA-vaccines the problem — this molecule is quite Moody, easily destroyed, and to deliver it all into the cells need a special medium”, — says Andrey Vasin, acting Director of the Institute of biomedical systems and biotechnologies of the Saint-Petersburg Polytechnic University Peter the Great (Spbpu). His research group, together with influenza research Institute named after A. A. Smorodintseva, Scientific center of research and development of immunological products named after M. P. Chumakov Russian Academy of Sciences and University of Maryland (USA) develops Sark vaccines.

In most cases, RNA is placed in a lipid shell. In SPbSPU use of polyelectrolyte microcapsules, synthesized from synthetic and natural polymers. Apart from the fact that their concentration in the body is negligible, they are gradually decomposed into harmless components.

“We started working on it two years ago, just in case of a pandemic. While there are more questions than answers,” the researcher notes.

It is unknown what the duration of immunity caused by this vaccine, and therefore, it is unclear how many injections will be required. There is no clarity with the mass production of microcapsules. However, there is still time. The project will come to the stage of preclinical trials until the autumn. 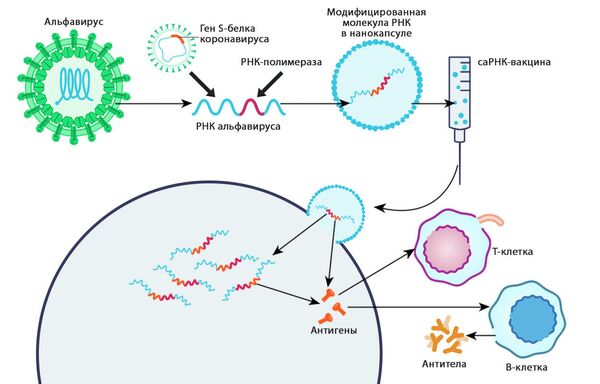 Create a vaccine for decades. The necessary long-term testing on cell cultures and animals (preclinical) and humans (clinical). Partly for this reason, none of the RNA vaccine is not yet approved for production. Above them are actively working recent years, although the idea originated in the 1990s. Pandemic coronavirus forced scientists to greatly accelerate: to run multiple stages to simplify testing.

Any vaccine first tested on animals. Check safety — does it allergies, fever, any side effects. Assess the immunogenicity — recognizing her body’s immune system, many antibodies produced, as well as the most important property — protectionist, when after vaccination, an animal infected with the virus and are looking to start the disease.

“Ideally it is better to use two animal models, such as mice and ferrets. In the case of the coronavirus immunogenicity can be studied to standard mice, but protectively — only humanized. In cases of emergency experience from the primates. The difficulty is that there are not many labs capable of working with primates in terms of BSL-3 (high level of biosecurity. — Approx. ed.). Such an important advantage in preclinical studies,” explains Andrey Vasin.

Called humanized mice susceptible to human diseases. In nature they are not infected with SARS-CoV-2, but scientists are correct by editing of the genome.

“Now to purchase the animals is unrealistic. The only available line of susceptible mice is in the USA in the nursery of The Jackson Laboratory. At the beginning of the pandemic, the embryos of these animals were frozen in liquid nitrogen, they immediately began to defrost. Demand for space in March, ordered more than three thousand animals! In the laboratory animal quickly propagated through IVF, but still the first deliveries will take place only at the end of June,” describes the situation Nariman Betulin from the laboratory of developmental genetics, Institute of Cytology and genetics SB RAS.

His scientific team from scratch creates multiple variants of humanized mice. The fastest way to obtain individuals with an integrated copy of the gene ACE2 person — it encodes a receptor of the cell membrane that transmits the coronavirus inside. It is trickier to improve their own mouse ACE2 gene.

Change the gene editor CRISPR-Cas9. This solution of different RNA and proteins, which enter Mitroglou in the embryo, consisting of only one cell. Then prepared for pregnancy female mouse make ECO — implanted into the uterus of the embryo edited. 20 days babies are born.

The process is very laborious and requires much manual operations. A full test of one vaccine is necessary at least a hundred of individuals.

Betulin admits that those who have already started human trials or preparing for them, tested their vaccine candidate is likely to soon on primates.

Another option, ferrets and hamsters, which, according to published data, are susceptible to SARS-CoV-2 without genetic modification. “If so, they are suitable for the study of produktivnosti,” — says Vasin.

Among Russian scientific teams have advanced in the state research center “Vector” (Novosibirsk, Russia) and research center of epidemiology and Microbiology named after N. F. Gamalei (Moscow). This was said at an online meeting of the scientific Council of Russian Academy of Sciences “life Sciences”, held at the site of RIA Novosti on may 28.

In Novosibirsk serves several vaccines, including those based on a weakened vesicular stomatitis virus. It is harmless to humans, is only in its genome to integrate areas encoding the antigens of coronavirus. Once in the body, such a viral vector begins to synthesize S-protein that causes an immune response.

The project began in January, and then in the BIOCAD has created prototypes of the vaccine, she tests on animals showed that blood antibodies. As reported by BIOCAD CEO Dmitry Morozov, clinical trials on humans will begin in July. 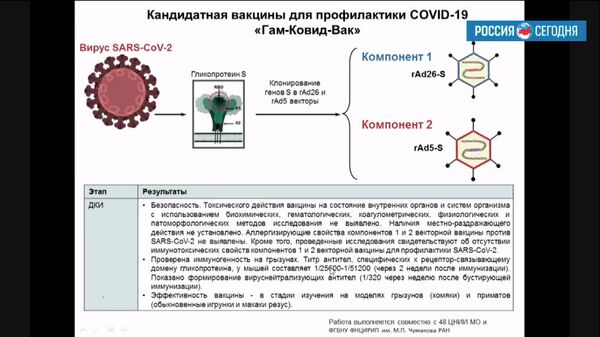 Viral vector, or rather two of virus had based and SIC Gamalei. This approach is called “heterologous Prime-boost immunization”. According to the Deputy Director Denis Logunov, this results in two types of immune response — humoral (antibody) and cellular cytotoxic and is being run in t-lymphocytes. They, as scientists assume, play a crucial role in the long-term protection against coronavirus.

Promising vaccines with whole virus particles and the pathogen is weakened or killed. Develop this direction at the Federal scientific center for research and development of immunological products named after M. P. Chumakov of wounds. The fact that we don’t know for sure, is it just the S-proteins to activate the immune system or anything else you need, therefore, to introduce into the body a virion reliable. However, to test such a vaccine should be more careful, and mass production requires special permission.

The concept of SIC Gamalei already checked when creating vaccines against viruses, Ebola and middle East respiratory syndrome (MERS). Their drug can become an alternative to vaccines consist of whole. Now there are clinical trials and at the same time is developed by industrial technology.