Peter Ivanovich Vedenisov — wealthy nobleman, born in 1866, after graduating from the Moscow Conservatory in 1888 and came to Yalta and settled in his own house in Butskoy street (now Kirov). Friendly, very energetic, communicative, fascinated, he immediately became one of the most interesting people in the city, met with Anton Chekhov, Maxim Gorky, Alexander Glazunov, Feodor Chaliapin, Cesar Cui, Alexander by Spendiarov.

He was one of the photographers of the early twentieth century that captivated the world’s first technology of color photography — autochrome. After it survived 150 glass prints made by Vedeniapin in the period 1909-1914 years — wonderful examples and images of pre-revolutionary Russia. 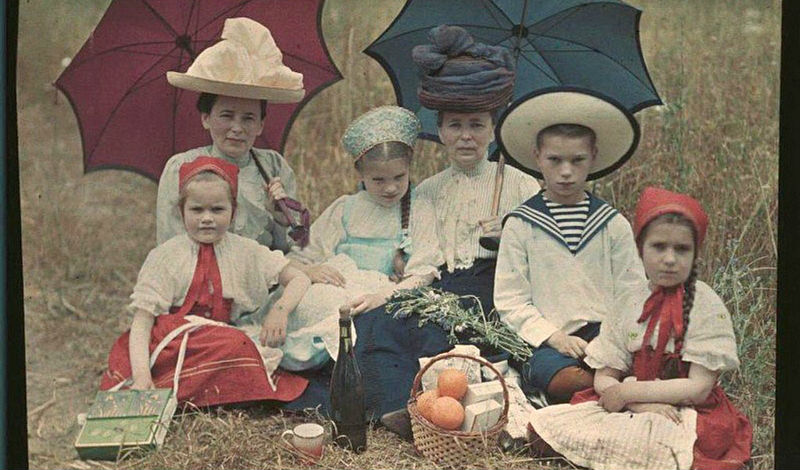 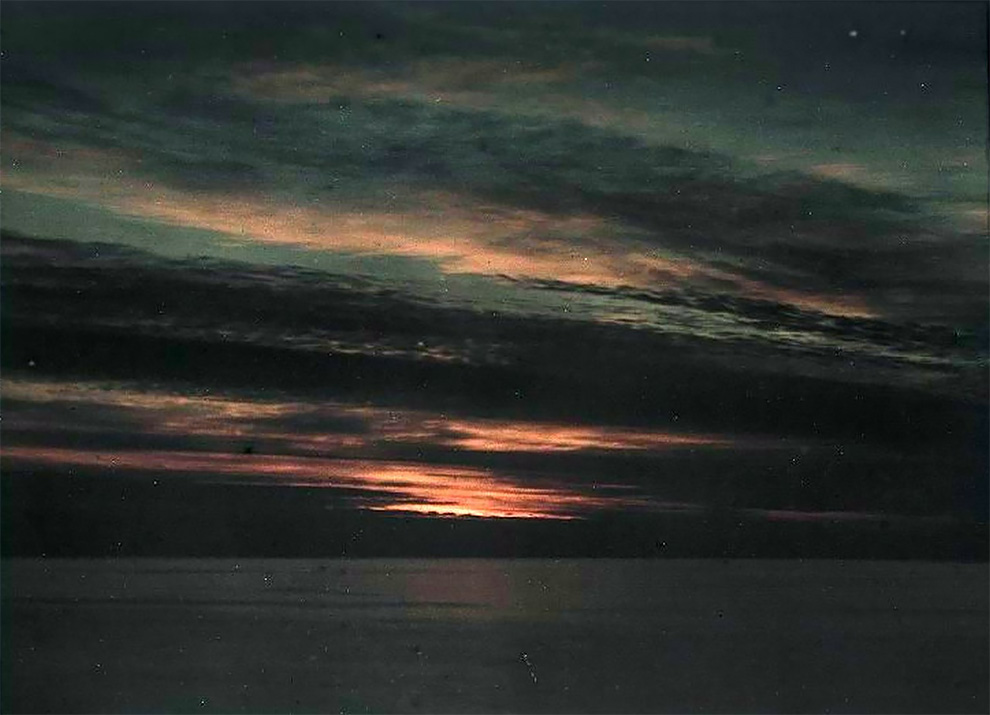 In the late 1880s in the town there is a circle of music lovers and singing “the Founders family-musical evening in Yalta”, among the organizers, in addition to Vedenisov, were well known people — Mrs. Fortunato, daughter of the critic V. Stasov, a well-known singer and teacher F. Chaliapin Dmitry Usatov and his wife, Maria, Dr. F. Weber, and others.

In 1892, the club was transformed into a “Society of Amateurs of music and dramatic arts in Yalta”. The society has arranged a musical and literary evenings, opened the library and music classes. Board members worked for free, educating the local public. In 1905 Peter Vedenisov becomes Vice-Chairman of the Yalta branch of the Russian musical society. At the same time, he organized the first in Yalta ensemble domra-players of the students of the Alexander gymnasium; rehearsals were held in his house. He often gives recitals and performs with chamber ensembles and as an accompanist. In 1919, Petro became the founder of the Yalta religious-philosophical society. 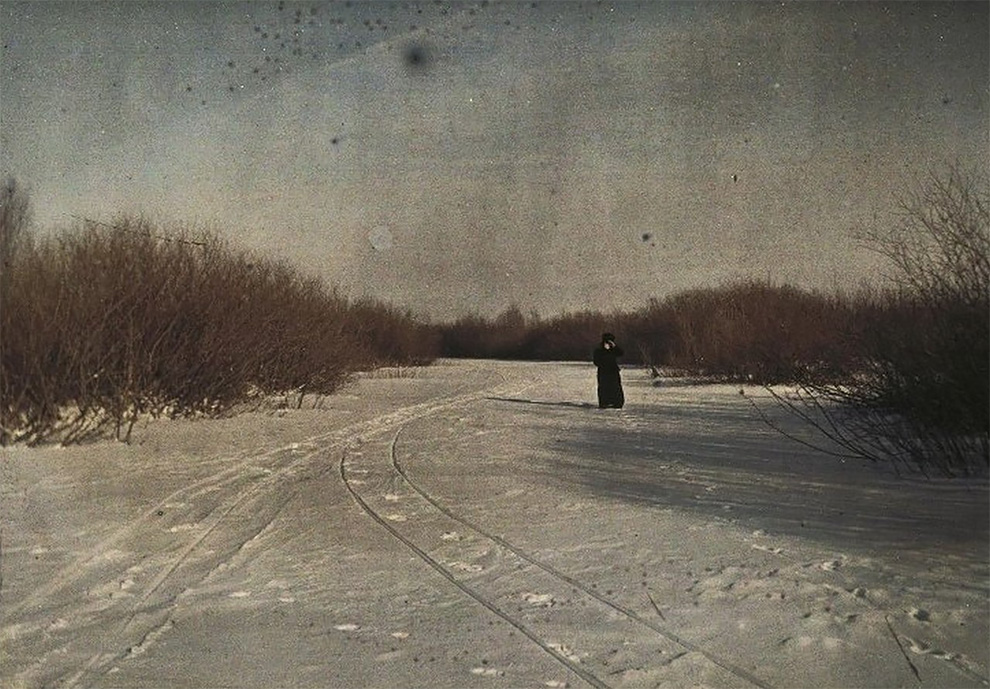 In addition, Vedenisov deals with local history, lectures on the history of Crimea, is seriously interested in meteorology, but his greatest passion is getting the picture. He takes members of his family, his friends, musicians, daily life and travel, meal, Pets, interiors and landscapes of Yalta and Simbirsk, where his relatives lived For. All this is not beyond the scope of a good Amateur photos and used them during the lectures. 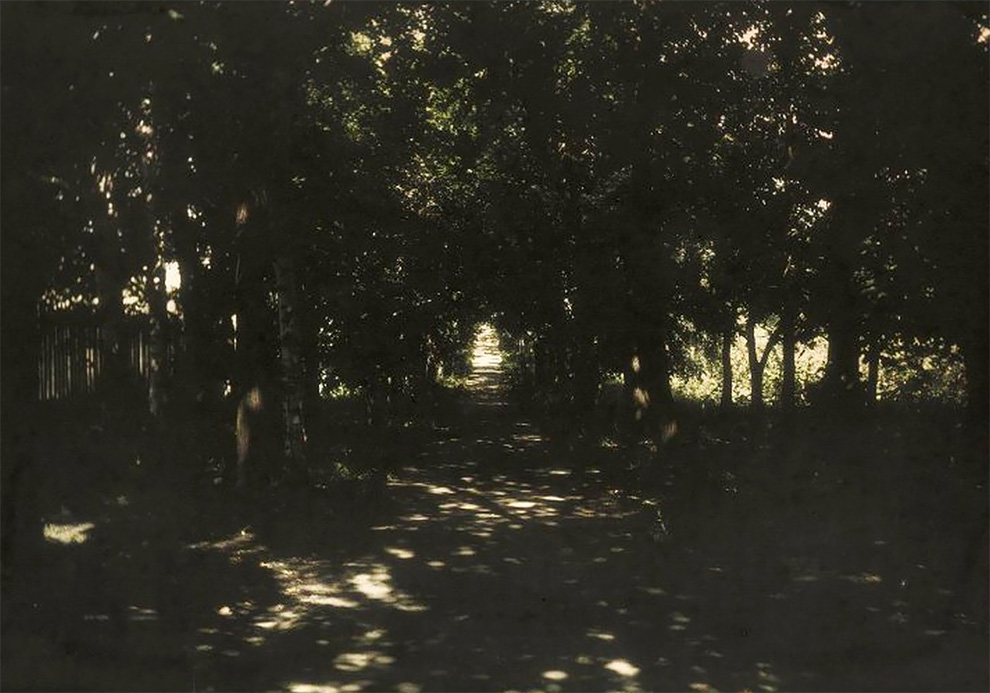 But in 1903, the lumière brothers patented autochrome — one of the processes of color photography. At the end of the XIX century, brothers of Lumiere developed the technology of three-color photography (using filters). But three sequential shooting, each through a filter, doing this method is only suitable for photographing static subjects. Later brothers of Lumiere decide to put all filters on the same wafer, allowing for the separation when shooting, and synthesis of colors in consideration of the obtained image.

Tri-color mesh consisted of granules of potato starch dyed in red, yellow and blue, when applying the second coat it gave orange, purple and green. If you look through the glass plate to light through the emulsion, you can see only those granules that match the color of the subject. In 1907 lumanovski glass plates began to produce industrial way (to six thousand per day), they are dispersed around the world. 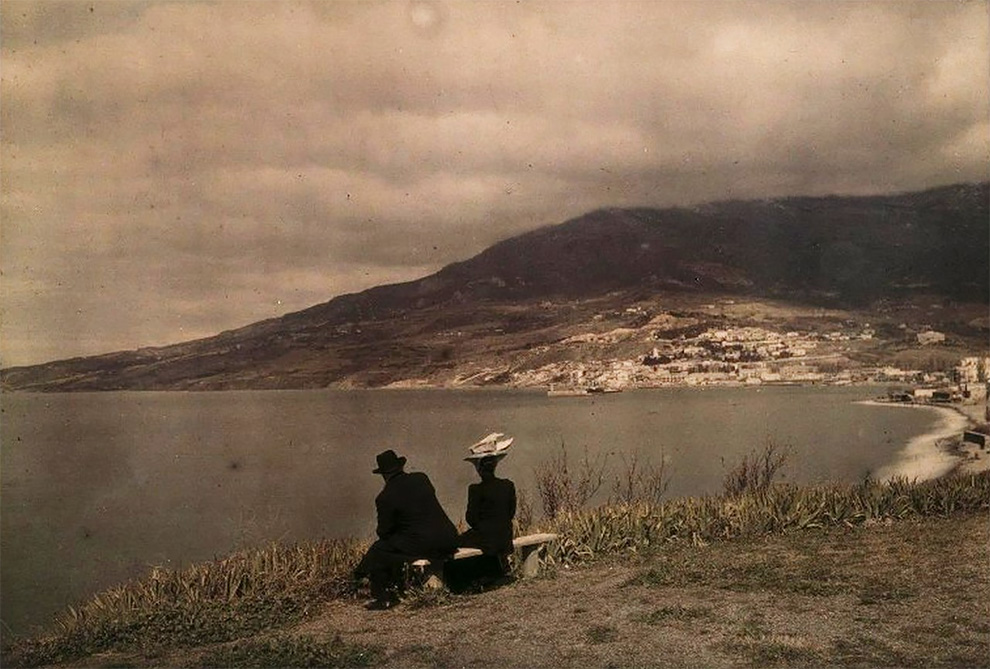 Was no exception, and carried away all the technical innovations Peter Vedenisov, began with enthusiasm to learn the invention of the Lumiere. Most of autochromes is stored in the Alupka Museum-reserve; in the collection of Moscow House of photography were about 150 of colored glass plates. Each such image exists in a single copy — this is a transparency on the glass, without printed paper print. 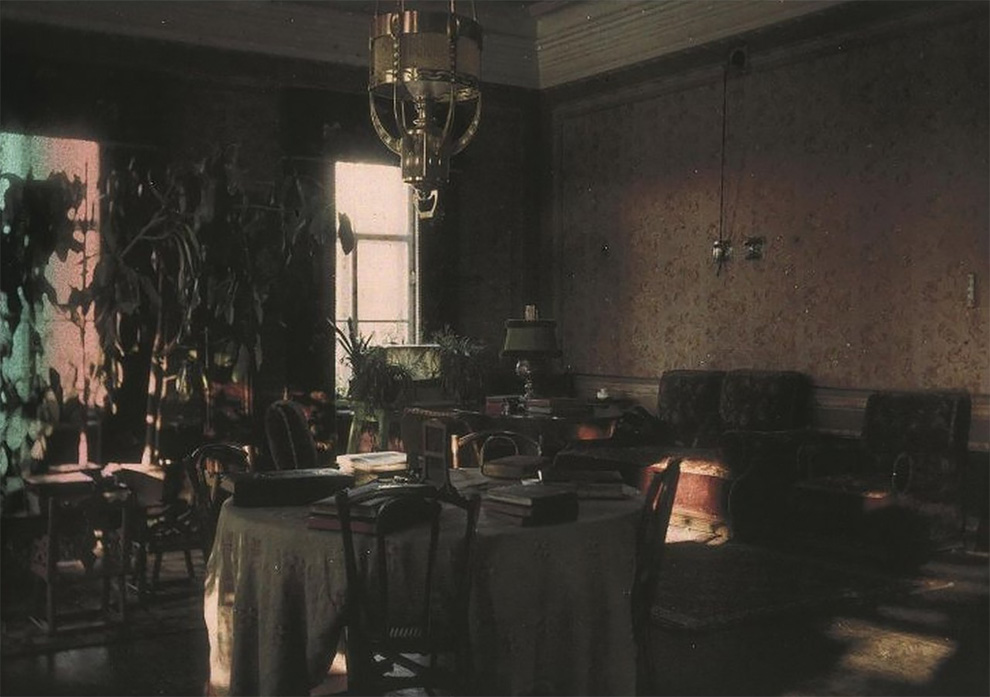 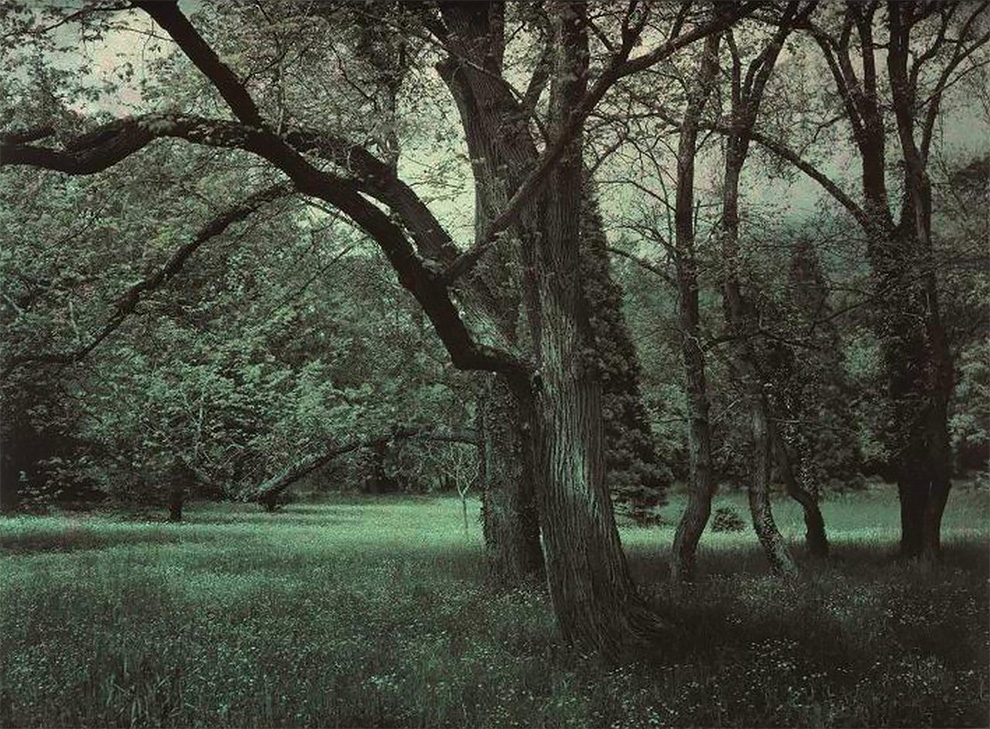 Autochrome Vedenisov United characters — members of one big family — and filmed for a very short period of time — from about 1909 to 1914. Among the images — his wife Vera, her mother Elena Frantsevna Bazileva, large family Kozakevich: Andrey, Sofia Nikolaevna and their five children — Vera, Natasha, nick, Lisa and Tanya. 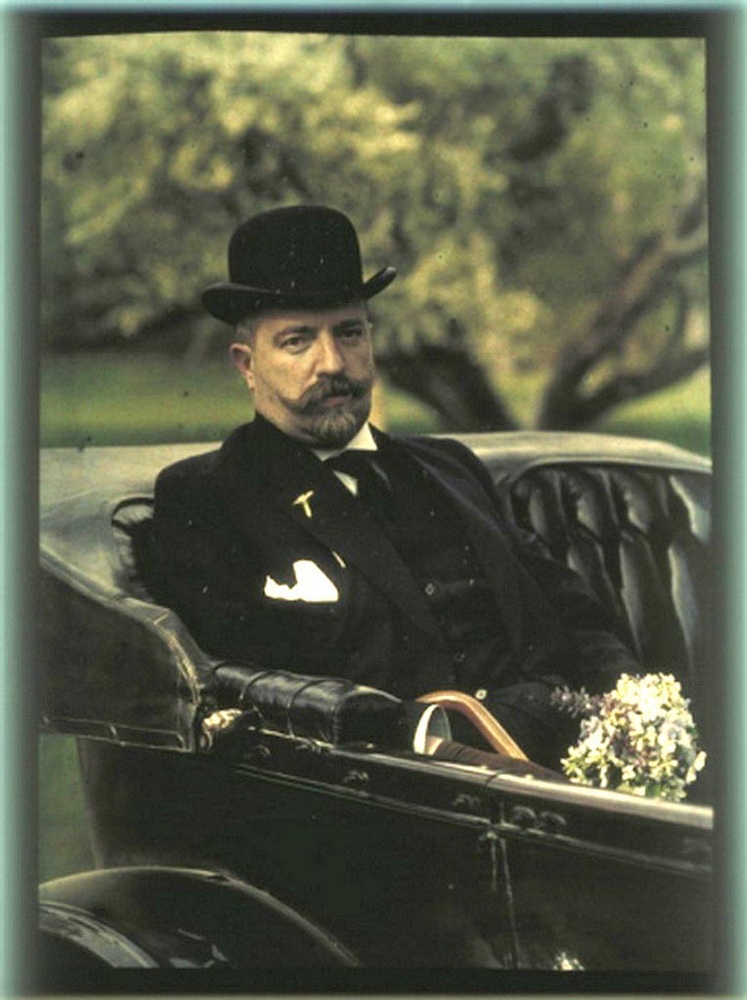 Vedenisov and For picnics, car and horseback, masquerades and festivals. 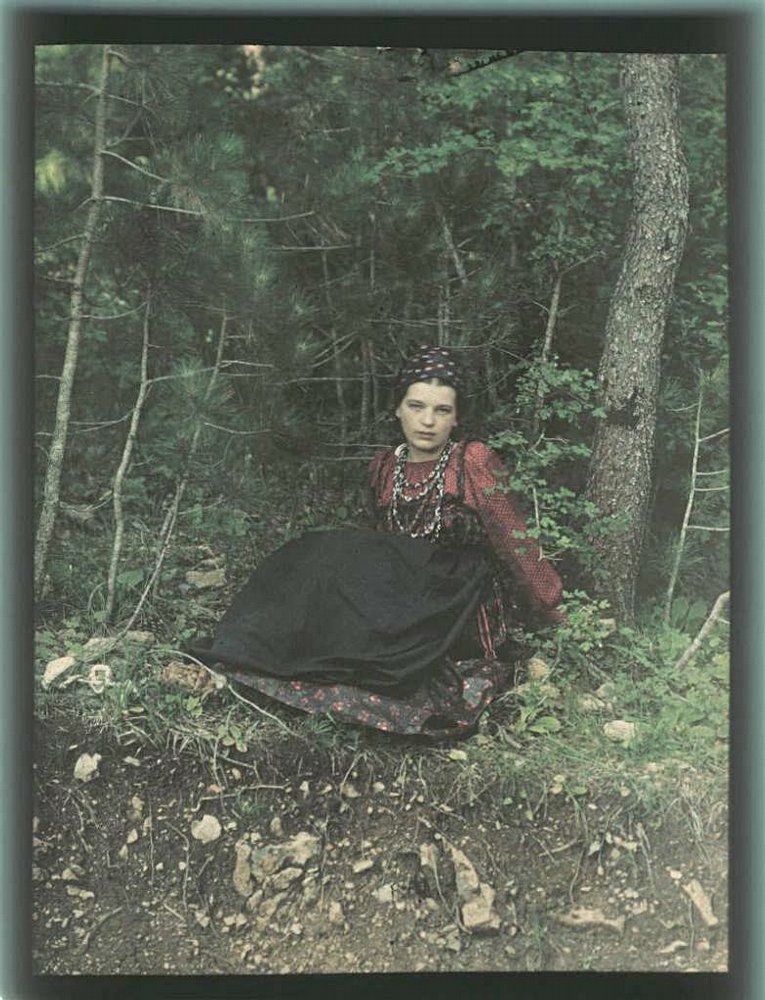 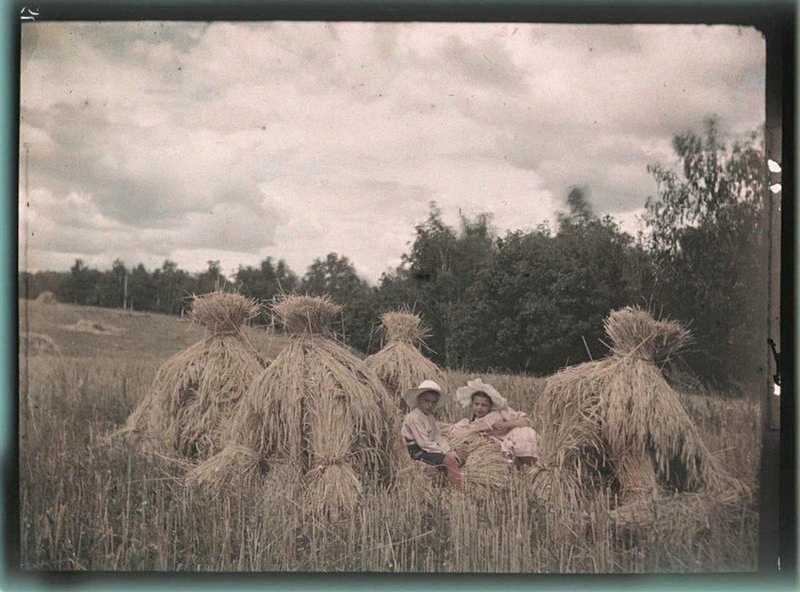 Nick and Natasha For the estate of Nikolskoye in the province of Simbirsk. 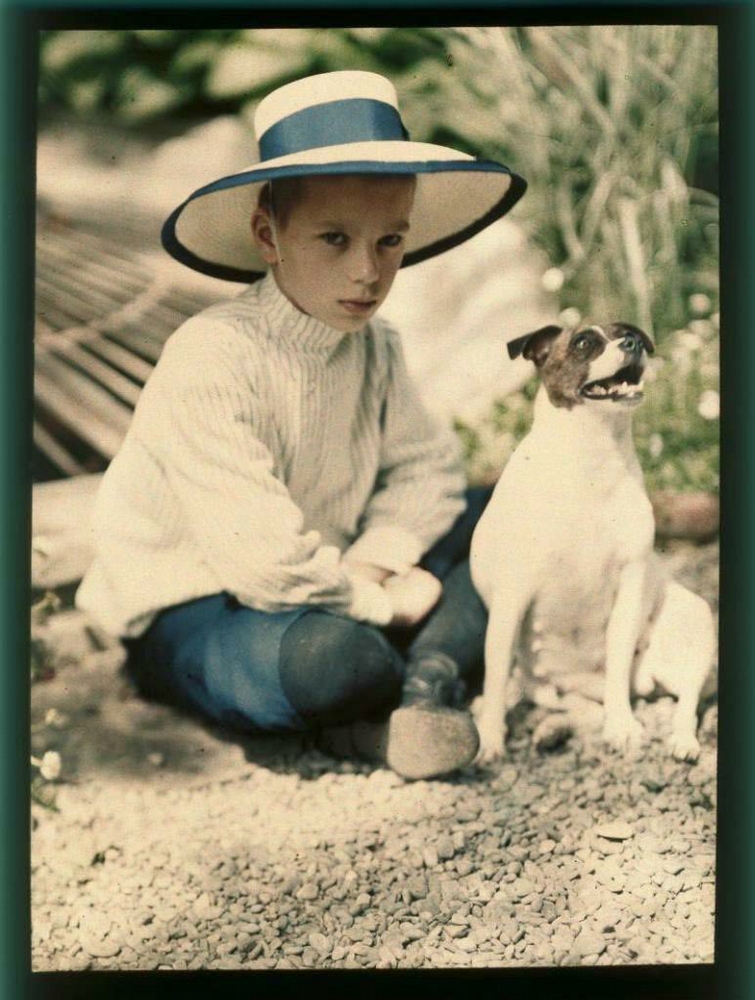 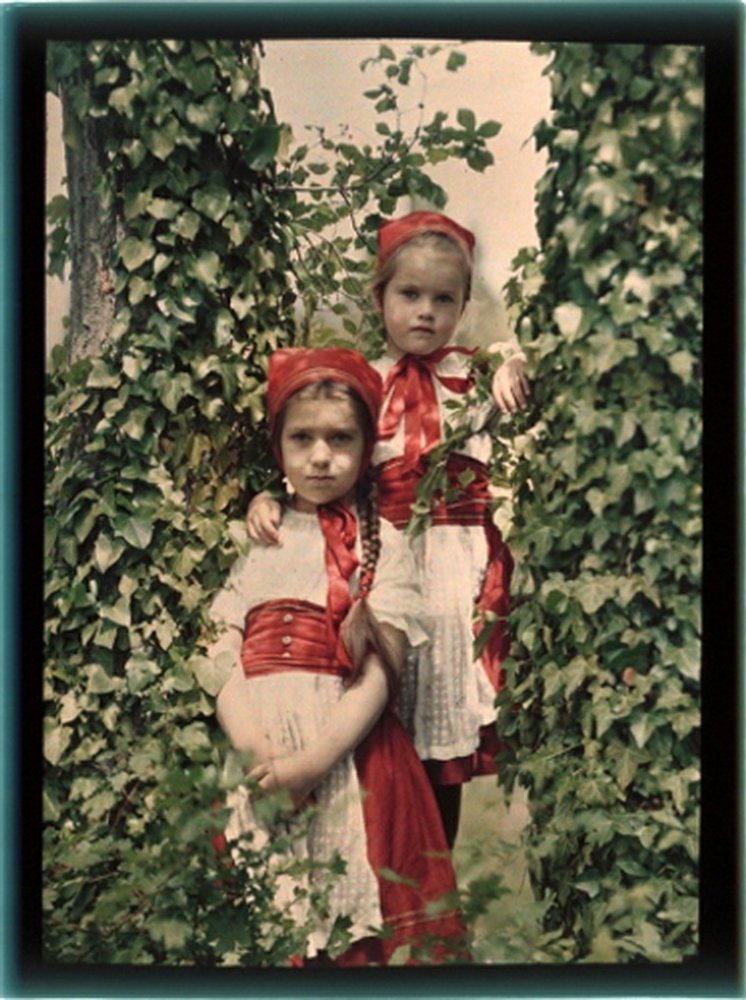 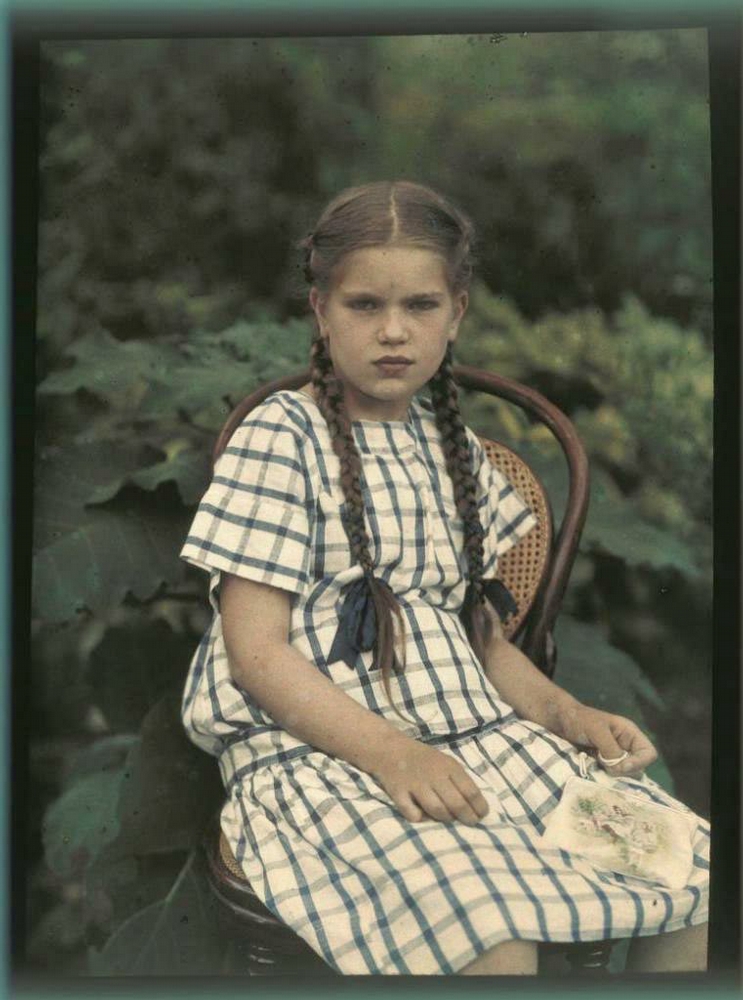 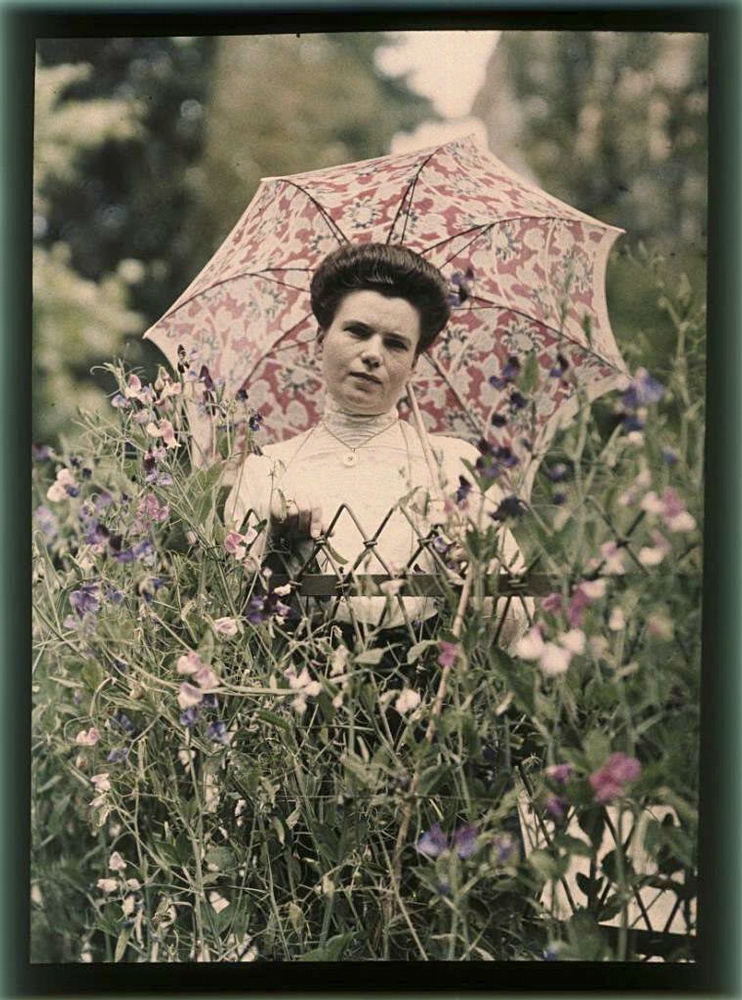 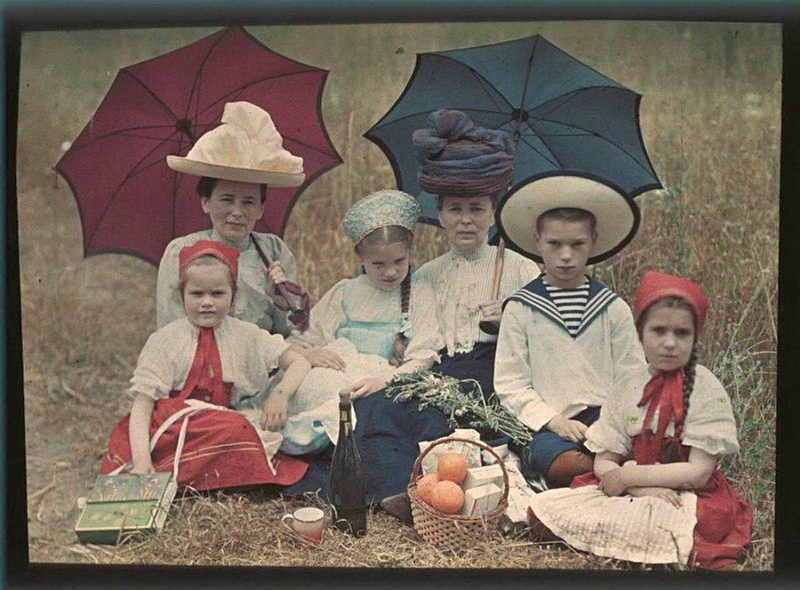 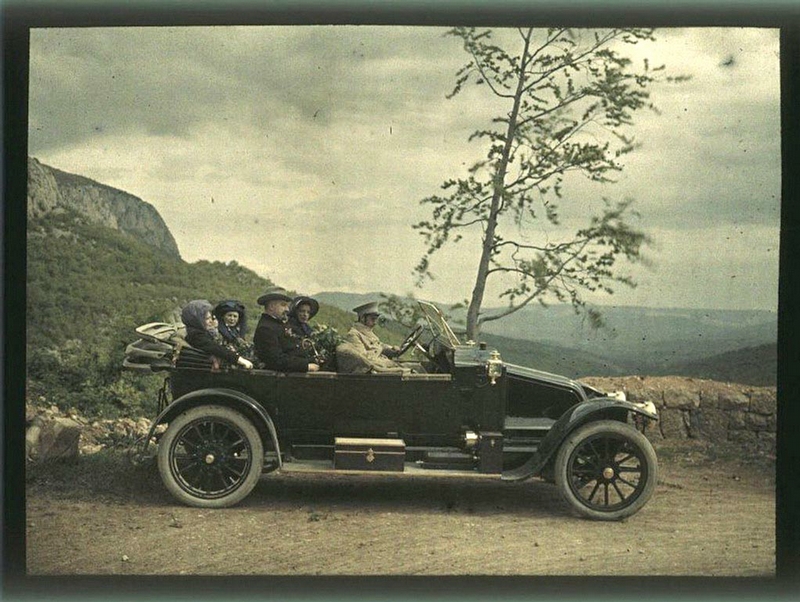 For and Vedenisov in Yalta. 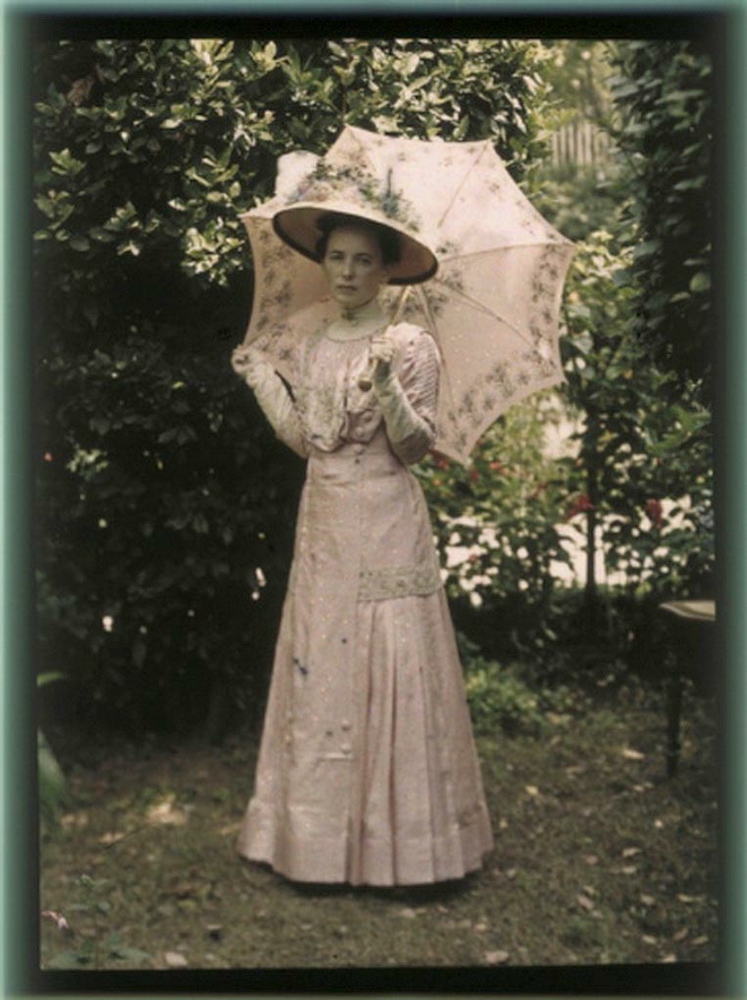 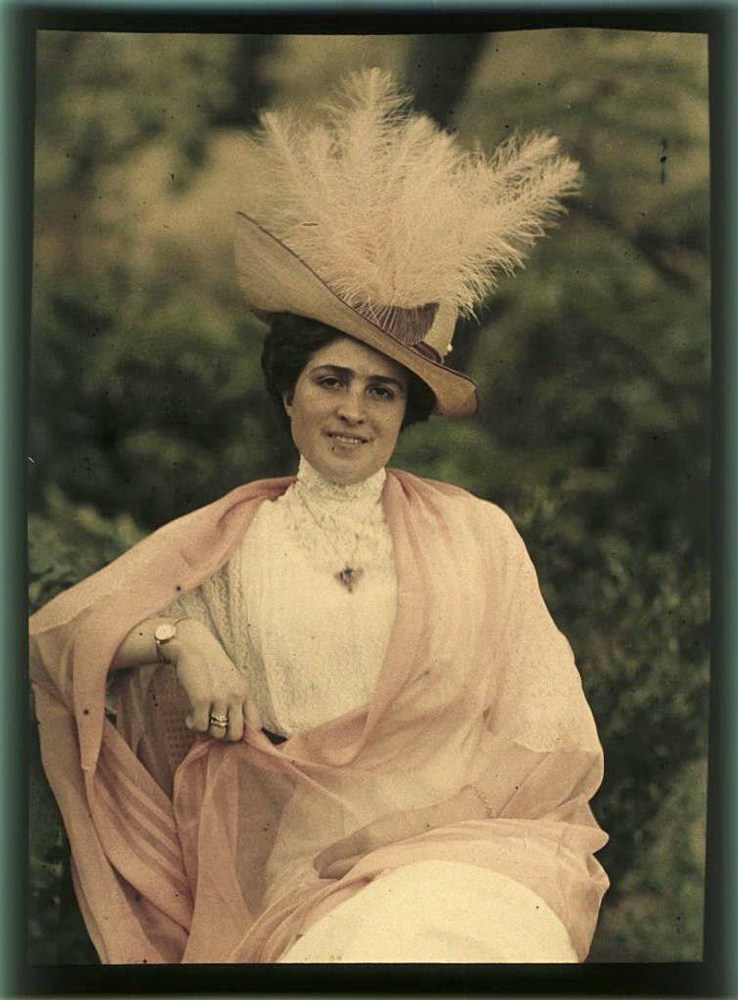 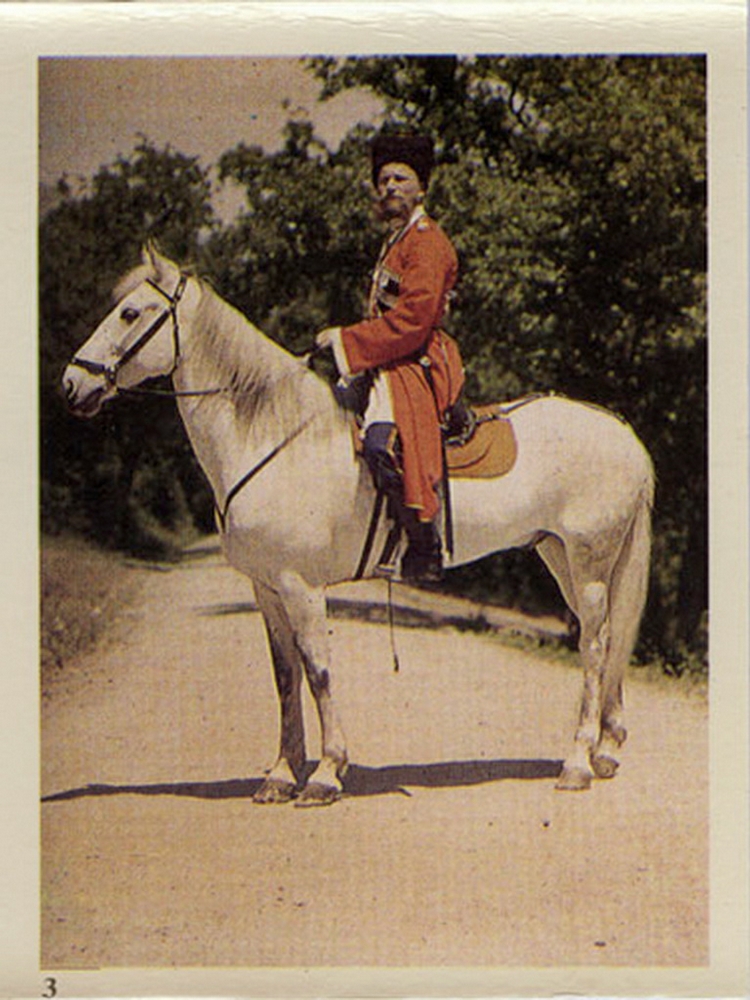 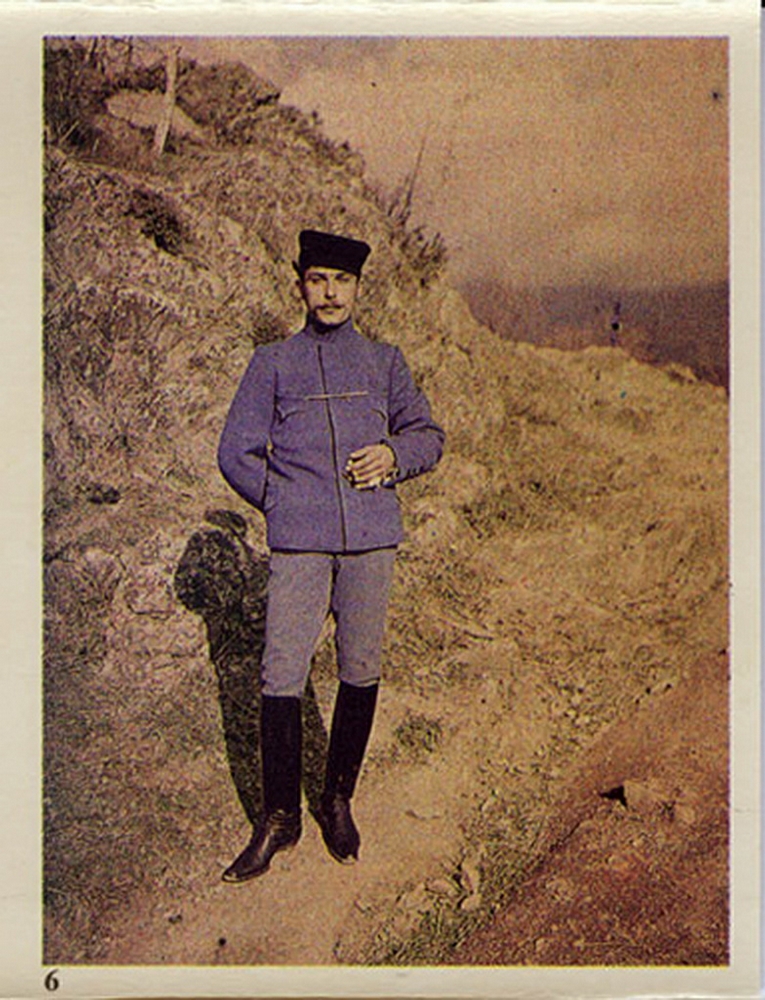 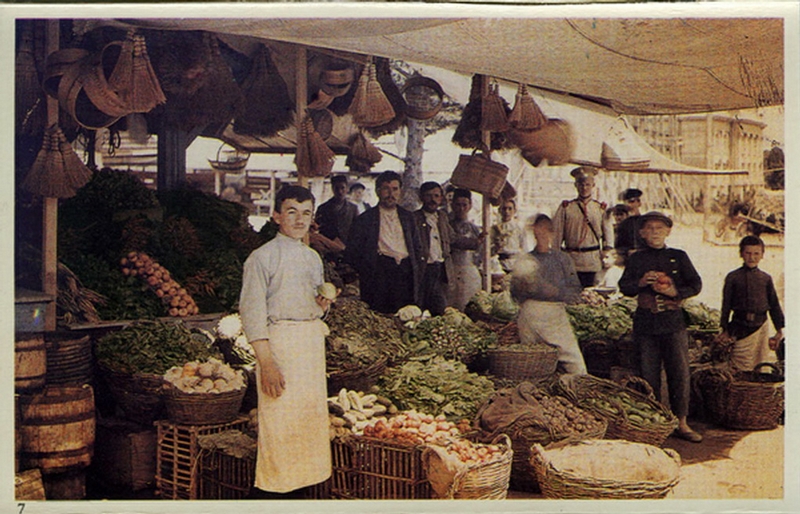 Bazaar on the streets of Yalta. 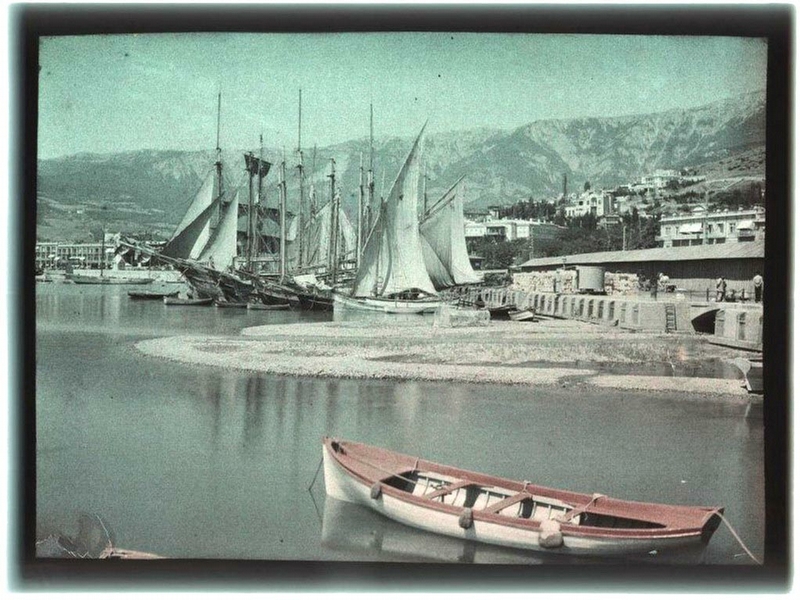 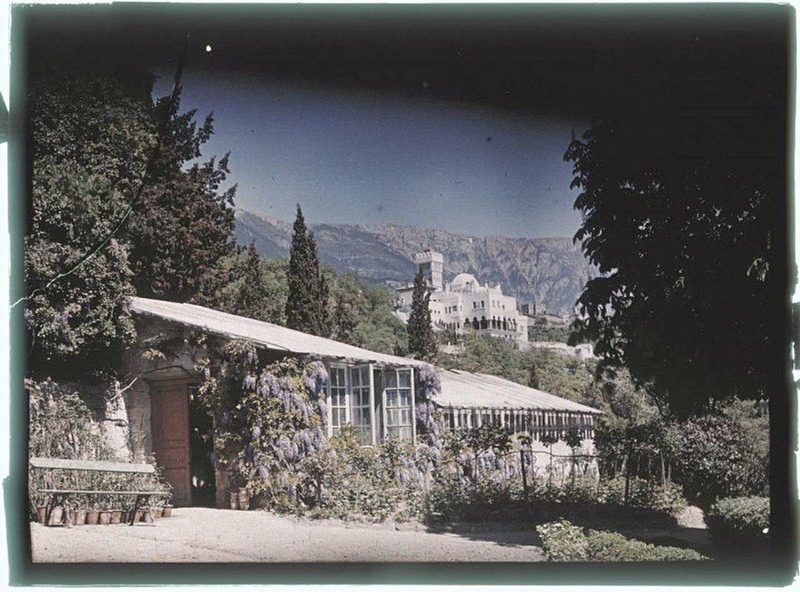 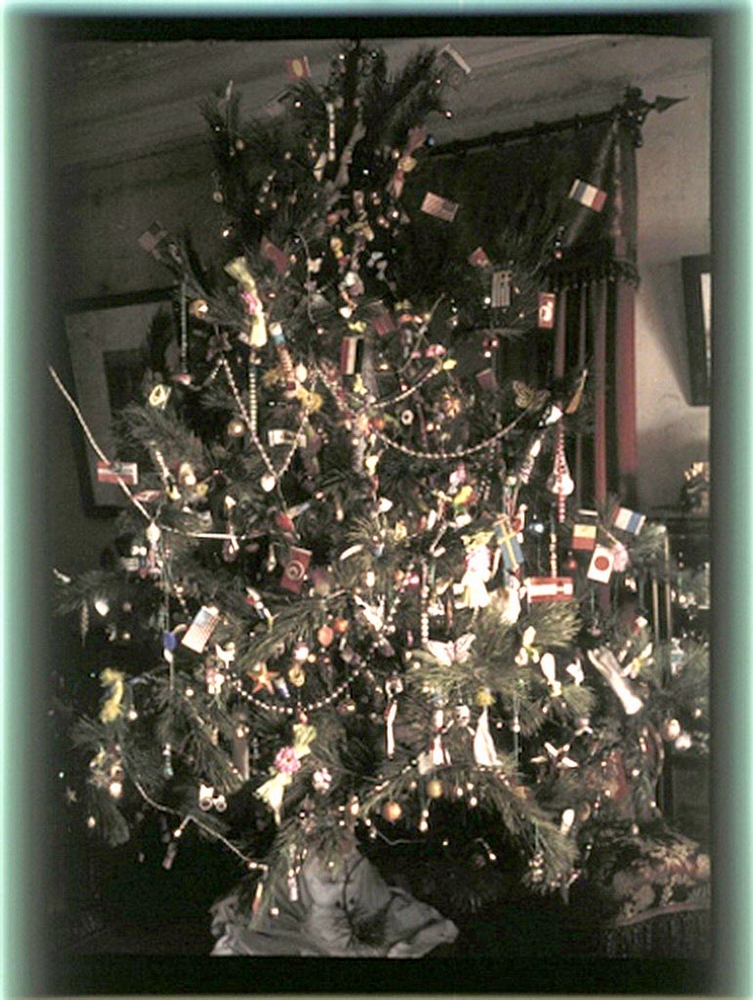 Christmas tree in the village of Nikolskoye, 1911

All these entertainment were not only fun, but also a strong educational element: Halloween outfits — this national costumes of the peoples inhabiting the Russian Empire; among the ornaments on the Christmas tree — the national flags of different countries, and the children of this large family from infancy received in the form of games information about the history and geography of Russia and the world. This is probably the last happy moments in family life, “then not yet at war with Germany”, all the upheavals of the twentieth century — war, revolution — were ahead.