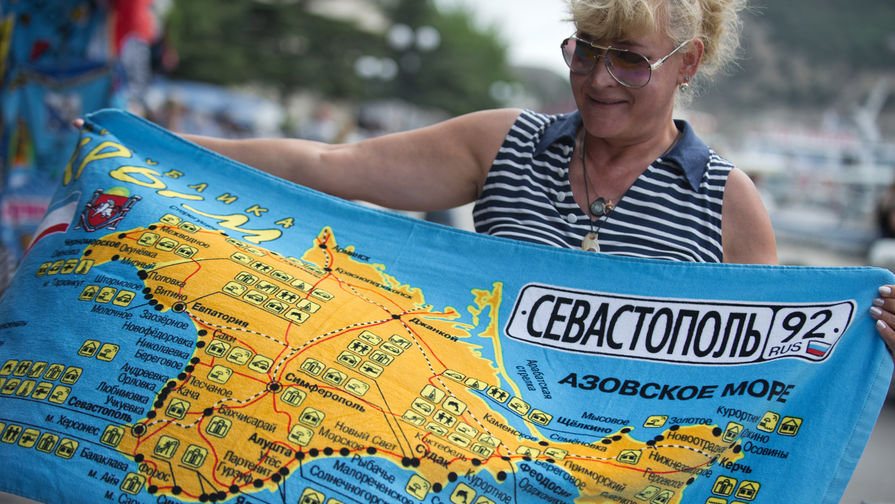 Russian President Vladimir Putin said that Russia “did not possess” in 2014, the Crimea Peninsula residents have chosen reunification. According to him, we must respect the decision of people, it is “the highest degree of manifestation of democracy.” He also added that Ukrainians “a fraternal nation”, and argued Russia “with the authorities of Ukraine”.

Russian President Vladimir Putin in “Russia. The Kremlin. Putin” said that in 2014 Russia “has not acquired the Crimea.” On the contrary, reports the TV channel “Russia-1”, the population of the Peninsula decided to join Russia in a democratic way.

He also stressed that Crimea “has always been our even from a legal point of view.”

“Secondly, we have not purchased. The people living in Crimea decided to reunite with Russia”, – said Putin. He also stressed that he would like to remind “all interested observers” that the Crimean referendum was “the highest degree of manifestation of democracy.”

“If so, then with this you just need to accept and treat this solution to people with respect,” – said Putin. He also drew attention to the absence of differences Russia has with the people of Ukraine – “the friction” is from the ruling Ukrainian elite.

“We do not quarrel with the Ukraine, we have separated the views of those who are in power now in Ukraine”, – said the Russian President, adding that “the Ukrainian nation has been our fraternal peoples, will remain so for ages to them.”

In March 2018, Vladimir Putin stated that Crimea “under no circumstances” will not return to the Ukraine. “What are You, crazy or something?!” — said Putin in response to a reporter’s question about the “circumstances of possible return” of the Peninsula.

Shortly before that, Putin said that Russia is “someone deliberately brought to the precincts of” the annexation of Crimea.

“I sometimes think, and I think that there are certain reasons that someone deliberately brought us to a point once where we had to act the way we acted. Not, of course, people expected that we act so quickly, so decisively, not to say defiantly”, — he said.

Putin also said that no doubt the application of anti-Russian sanctions after the decision on accession of Crimea to Russia. The head of state noted that “taking these decisions, I, of course, the scales had to put the return of the Crimea and the possible consequences associated with our relations with many countries of the world.”

According to Putin, from Russia, few had expected such a decisive and quick action. “Our opponents and our partners have developed a very correct tactics, and to some extent their goals, of course, hope to achieve, but I think we still in for a long win,” said the President.

Republic of Crimea and Sevastopol became part of Russia on the rights of the subjects of the Federation in March 2014, through a popular referendum. The reunification of the Crimea with Russia was enshrined in the Constitution of the Russian Federation. Ukraine of the results of a plebiscite are not recognized and continues to consider Crimea their own, but the “temporarily occupied” territory.

Also the annexation of Crimea to Russia does not recognize the USA and the EU. With more than 96% of the population of the Republic of Crimea and 95.6% of voters of Sevastopol voted for joining Russian Federation.

In 2016, Putin stressed that the people of Crimea have expressed their opinion on the referendum question “historically closed” and return to “old regime” can not be.

At the end of last autumn, military expert, Professor at the naval war College USA Lyle Goldstein in his article for the National Interest stated that the US should stop “blindly supporting Kiev”, and also to recognize the Russian Crimea.

“In fact, there are plenty of reasons why Secretary Kerry it’s time to “accept” about the black sea Peninsula,” the article says.

The expert notes the bloodless nature of accession, as well as “historical justice,” since in 1954, the Soviet leadership transferred Crimea to the Ukrainian SSR in defiance of all the laws.

“In the name of the Crimea Russians shed rivers of blood — as in the Crimean war and in World war II, saving the world from Nazism,” — emphasizes the expert.

Moscow will always consider Crimea as key to national interests in the region, adds Goldstein, since there is a powerful naval base. The expert notes that after the chaotic collapse of the Soviet Union preserved the borders of the former Soviet republics is extremely fragile, and this situation will continue “for decades”. Thus U.S. national security is “precarious” situation in the former Soviet Union is not threatened.

Goldstein criticized the neoliberalism and “the desire everywhere to push international law”. According to him, it’s time to abandon the fantasy and a realistic look at things.

The major countries of Europe are tired of anti-Russian sanctions, he continues. The rejection of the restrictive economic measures will have on Italy, Germany and other EU countries only a positive impact.