A few months ago in China almost stopped cases of infection with coronavirus, and it seemed that the epidemic is over. However, in June recorded two outbreaks. And if you understand how the disease came to Beijing, (source they immediately called major market “Sinhali”), is not as difficult in the case of the Northern Chinese city of Tianjin, experts had to break down. Virologists believe that there the virus can hide in frozen seafood. 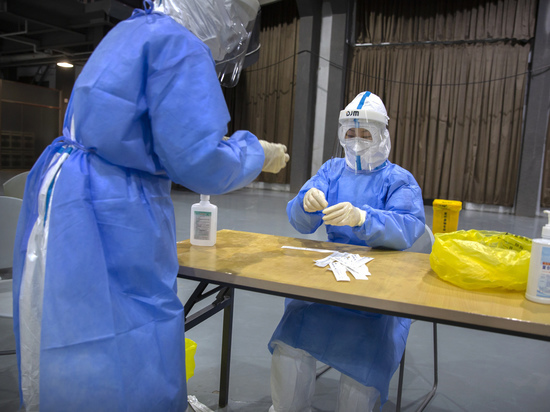 A few days ago in Beijing it was recorded infection by the coronavirus. In a more detailed study it was found that all cases for several decades, and the Chinese government was forced to block whole areas of the city, introducing restrictive measures. A few days later was another outbreak of the disease in Tianjin – there is caught one person, but under very strange circumstances.

Chinese virologists have suggested that the case COVID-19, which was reported in Tianjin city in Northern China, could be transmitted to humans from the frozen products, which were particles of the coronavirus

Sick was a 22-year-old man working in a city hotel “Conrad”. He washed dishes at the hotel from 30th may, from time to time and also doing cleaning, frozen seafood (based on available information, foreign origin).

Tianjin Center for control and disease prevention reported that infected the young man did not go anywhere during the 14 days before onset of his illness, and he had not observed any contacts with confirmed or suspected patients.

After this information was published, an investigation began, could get to the hotel seafood with particles COVID-19. According to the latest information, seven employees of the hotel “Conrad” recently traveled to Beijing. However, all in one voice assured that none of them attended the market, “Sinhali”, where there are Beijing new outbreak of coronavirus. Also none of these people had close contact with infected patient.

Deputy Director of the Department of biology of the pathogens of Wuhan University, Yang Janicu said the Chinese newspaper Global Times that the patient is likely to was picked up a virus from the frozen food or used to freeze the ice. Here a malicious joke could play freeze. If the products have been infected with a coronavirus, the disease could survive for several weeks of freezing – much longer than under normal conditions.

“In temperatures from -20°C to -30°C the virus can live for months or even years,” says the virologist.

Yang Jancso urged local authorities to conduct a genome study to find out whether the virus carried by the patient in Tianjin, which has the same origin as in Beijing.

“If so, frozen seafood, which dealt Tianjin, the patient may be from the same batch as those that were sent to the Beijing market “Sinhale”. And then it’s safe to say that this batch of seafood, or ice used to freeze, was infected with the virus,” said the scientist.

“It is also possible that the virus had the same origin, coronavirus and in Wuhan, this cannot be ruled out,” said Yang. Nevertheless, the scientist believes, some cases occur after a major outbreak, this is normal.

In parallel, Chinese officials are investigating how the coronavirus still could be on the market in Beijing. Remains the most common version is that the “legs” of the new outbreak that struck the Chinese capital, “grow” out of Europe. Since the traces of the plague was discovered on the boards for cutting salmon, is imported, most likely from Norway, a Beijing supermarkets away from sin decided to remove this fish from their shelves.

“The virus could remain in the imported frozen products and not to mutate due to the frozen environment throughout the period of storage and transportation from overseas to China – said the assistant Director of the National Institute for the control and prevention of viral diseases Zhang Yong. In the end, we see that this virus is closer to the old European virus. We hope that with the help of laboratory tests and analysis of the genome sequence, we can learn ways of transmission.”