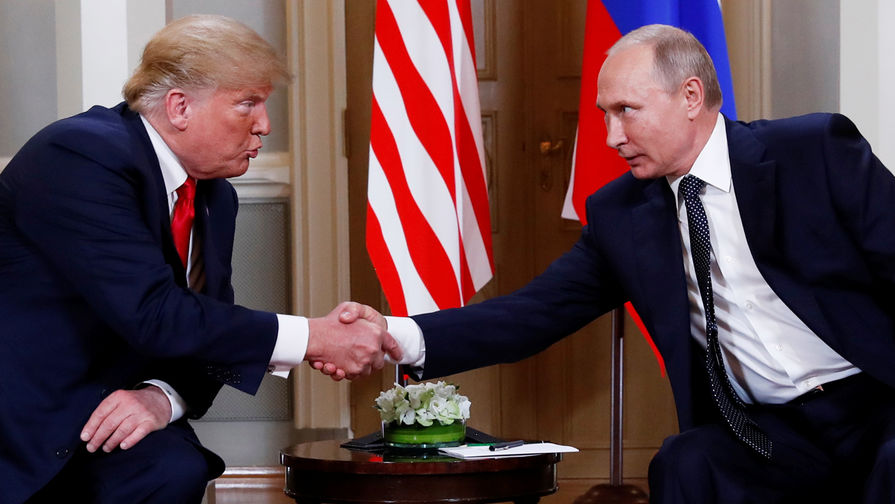 In USA was published the book “the Room where it happened: a memoir of the White house” by John Bolton. In her former adviser to Donald trump openly talks about the attitude of the American leader to Vladimir Putin, the Emmanuel Macron, Angela Merkel, and other world politicians.

Many world leaders know the true attitude of the US President Donald trump believe foreign journalists. However, the opinions of the head of the White house, presented in the book, ex-Advisor to the American leader for homeland security John Bolton “the Room where it happened: a memoir of the White house,” show that trump is really taking their colleagues without the proper degree of respect. And the attitude of the owner of the Oval office to the President of Russia Vladimir Putin has remained a mystery.

“As for the ratings of Putin, he [trump] never expressed any opinion, at least in front of me. I never asked what he thought trump, perhaps for fear of what you might hear. His personal attitude to the Russian leader remained a mystery,” he wrote.

However, the Bolton book, which went on sale June 23, sets out his attitude to the President of Russia. He claims that he was alarmed by a decision by trump to congratulate his Russian counterpart on his election victory in March 2018.

The fact is that while the date of the vote coincided with a strong anti-Russian information campaign after the poisoning in the British Salisbury former GRU officer Sergei Skripal and his daughter. London almost immediately accused Moscow of involvement in the incident, without providing evidence and finished with the phrase “highly likely” (eng. — highly likely), which later became winged to denote various kinds of poorly reasoned accusations of Western countries against Russia.

However, trump, according to Bolton, decided to congratulate the Russian leader on his re-election on the advice of another ex-national security adviser Herbert McMaster. Later, however, the head of the White house in response to the international scandal caused by the “case Skrypalia”, yet expelled from the United States more than 60 Russian diplomats.

Another episode, which recalls in his book Bolton, refers to a personal meeting of Putin and trump in 2018 in Helsinki — it was the first full-fledged summit between the two leaders. Says former adviser to trump, the head of the White house then allegedly especially late in the negotiations and even considered the option their complete abolition.

“We were told that Putin’s plane was late out of Moscow… I was hoping trump will be quite annoyed about it to be tougher with Putin, and not Vice versa. We really considered the option of full cancellation of the meeting if Putin will be quite late,” he writes.

It should be noted that trump is, indeed, appeared in the Palace of the President of Finland, which hosted the summit, 20 minutes after the Russian President.

This information, however, was not confirmed in the Kremlin.

“It is hard to say, I’m now honestly, the details don’t recall there especially the President [of Russia] nobody expected. I don’t know as especially late trump, but our escort service works flawlessly, and Putin doesn’t wait for anybody” — said the press-Secretary of Russian leader Dmitry Peskov.

However, there was at Bolton and the words in the address of Vladimir Putin, which could be regarded as positive. For example, the fact that the Russian leader clearly represents the national interests of his country, of which Bolton was even afraid to leave trump with Putin in a tete-a-tete.

“Putin has amazed me completely all knowing being calm and confident, whatever the domestic economic and political issues in Russia nor spoken. He fully knew the priorities of Moscow in the sphere of national security. I wouldn’t want to leave him in the room alone with the tramp,” writes a former adviser to the American President.

Love to Merkel and dislike Macron

Much less “lucky” to European leaders in their address Bolton remembered much more harsh words from the mouth of trump.

Thus, former US presidential Advisor for national security, writes that Trump really doesn’t like Prime Minister of Canada Justin Trudeau and the President of France Emmanuel macron. “But he suffered them, mockingly crossing swords with them at meetings and openly joking,” recalls Bolton.

While trump is not always consistent in their attitude to the French counterpart. For example, the US leader called the Makron almost a “best of Europeans”, and then it was he who, in the opinion of the head of the White house, was supposed to meet with Iranian President Hassan Rouhani.

But at the NATO summit in 2017, according to Bolton, the us President accused Him that he “always merge all their conversations”. The French leader similar charges were dismissed.

And at some point trump, says the former adviser, and is expressed negatively in relation to the Macron: “Everything he touches turns to shit” — quoted by Politico excerpts from the book.

The same inconsistent estimates trump gave in respect of German Chancellor Angela Merkel. On the one hand, the views of the White house reflect a respect for Germany, on the other — irritation of the external policy of the Chancellor and approaches to security issues.

“[Trump] is a very respected Chancellor Merkel, noting that his father was German and her mother is a Scot,” writes Bolton in the Chapter on the NATO summit in 2017 in Brussels.

In the same meeting American leader “kissed her on both cheeks,” then said he “loves angel.” This reaction is trump called the agreement of the European members of NATO to commit itself to increase spending on defense.

The differences (however, this is not new information) caused the project of the pipeline “Nord stream — 2”. “It is sad that Germany concludes a major oil and gas deal with Russia. We protect all of these countries, and they make a deal.

We have to do something, because we are not going to put up with it. Russia invaded Germany”,

Some irritation felt trump and against the former Prime Minister of great Britain Teresa may, due to the fact that in London, “except trump, no one seemed worried” questions Brexit. This is due to the determination of the current head of the British Cabinet of Boris Johnson or not, but that’s what politics Bolton calls the “beloved leader” of trump. The same rating awarded to the Prime Minister of Japan Shinzo Abe.

It should be noted that inherited from Bolton and the Tramp. Of the previously published excerpts from the memoirs, that he appreciates his former chief as “stunningly ignorant”, and accuses the Democratic party of the United States that impeachment proceedings against the head of the White house were running properly.

Trump reacted strongly to the plans of Bolton to publish the book.

“Until I fired him, he told me to print only the good. Offended dull fool, who only wanted one thing — to make a war. Did not understand, was ostracized, and was happy me fired. What a fool!” — responded to accusations the US President on Twitter.

How to make "floating" gifts