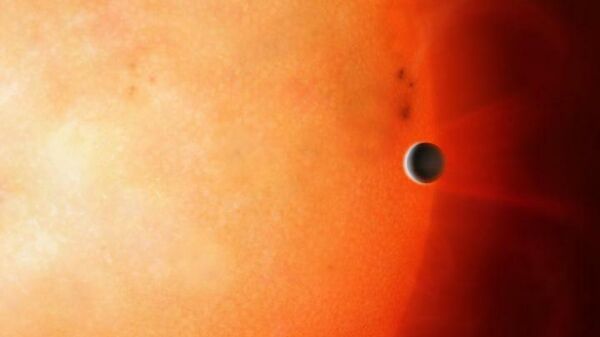 The TESS satellite is recorded only 490 light years from Earth new exoplanet HIP 67522 b. It is the youngest of the currently known hot Jupiters. Its age is approximately 17 million years. Description open is published in the journal Astronomical Journal.

Hot Jupiter is a gas exoplanets the size of Jupiter, which revolve very close to their parent stars. Similar objects in our Solar system, and scientists have long debated how they were formed. To answer this question, astronomers did not have enough observations for young gas giants at the beginning of his career. Now such an object is found.

The TESS satellite NASA found in well-studied star HIP 67522, whose mass is close to the mass of the Sun, a gas giant located very close to it — exoplanet revolves around a star in seven days. Age star 17 million years, and HIP 67522 b, according to scientists, only a few million years younger, while most of the other known hot Jupiters — more than a billion years. Exoplanet HIP 67522 b is about 10 times more Land that is close in size to Jupiter, and its composition is dominated by gas.

The satellite is called TESS (Transiting Exoplanet Survey) is used for detection of exoplanets transit method — scientists are looking for small dips in the brightness of stars, indicating that between the observer and the star was a planet. But young stars, tend to have a lot of dark spots on their surfaces, which can be seen as a transit of the planet. Therefore, to confirm the opening of astronomers took data Observatory infrared space telescope “Spitzer”.

The telescope left orbit 30 January 2020, but scientists continue to analyze the results of his observations stored in the Infrared science archive at the California Institute of technology.

“We can learn a lot about the Solar system and its history, exploring the planets and other objects orbiting the Sun — are contained in the press release the jet propulsion Laboratory (JPL) of NASA, the head of research Aaron Rizzuto (Rizzuto Aaron), planetary scientists from the University of Texas at Austin. But we’ll never know how unique or common is our Solar system, if we do not look for exoplanets. Researchers studying exoplanets figure out how the Solar system fits into the overall picture of the formation of planets in the Universe.”

There are three main hypotheses about how hot Jupiters were so close to their parent stars. First, they could immediately be produced there, but this is unlikely. Huge temperature, stellar winds and massive explosions on the surface of young stars, most likely, would have dispelled any gas accumulation in the vicinity of them.

The second hypothesis, which is recognized by most scientists, is that the gas giants formed on the edge of the planetary system, beyond the so-called snow line, where the frozen substance could form an ice nucleus of those planets, and then migrated inwards due to gravitational attraction of the gas-dust disk surrounding the star.

The third option — hot Jupiters moved to the star later, when comes into force, the gravity of other planets of the system. At least for very young hot Jupiter HIP 67522 b this hypothesis is not exactly ideal.

But in one case, the authors note, it is hardly possible to judge the education of the whole class of planets. Scientists intend to continue the search for young hot Jupiters to in the end solve the mystery of their formation.