The Falkirk wheel (Falkirk Wheel) located near the town of Falkirk (through him and got its name). This superstructure is unique in its kind.

The source data were as follows. With a sufficiently long time it was not far from each other two channels. One from Edinburgh to Falkirk and the other from Glasgow to the river Foz, between their closest points were about three kilometers. Was an urgent need to link the two major Scottish cities. What has been done — built a system of 11 locks, as the difference in height was 35 metres. All is well — but only through these gateways three kilometers took ships as much as 9 hours.

In the 30 years of the twentieth century, channels were decommissioned and backfilled. 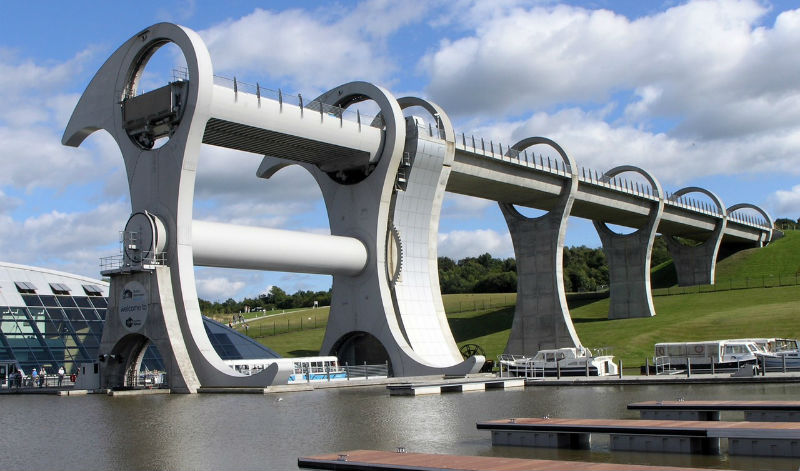 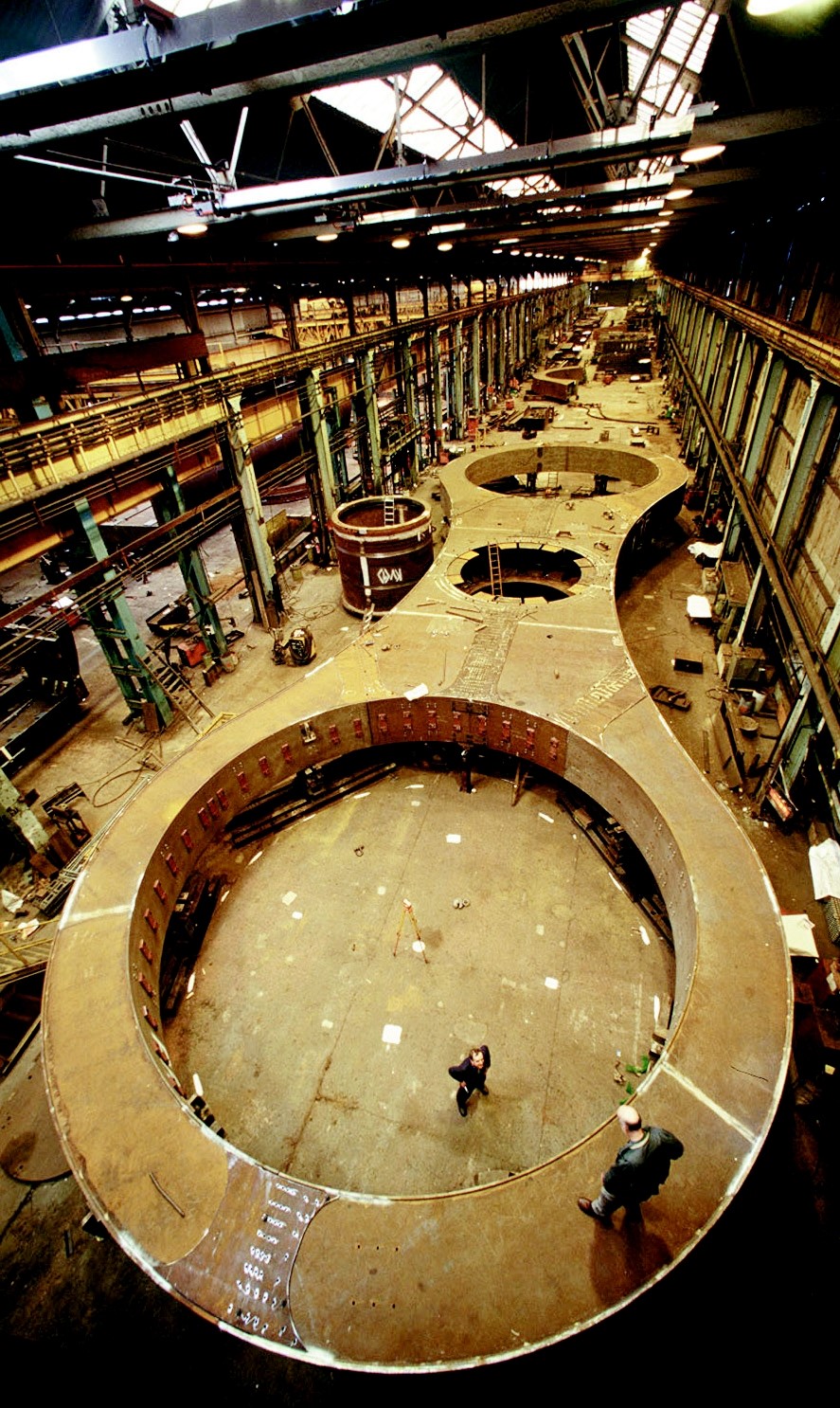 In 1998 it was decided to launch the “Millennium link” project of renewal of navigation on the canals of Scotland, connecting Glasgow with Edinburgh. Instead of restoring the old bulky systems engineering was proposed project in the style of the XXI century.

Discussed numerous options — from a giant Ferris wheel to the turning platforms. 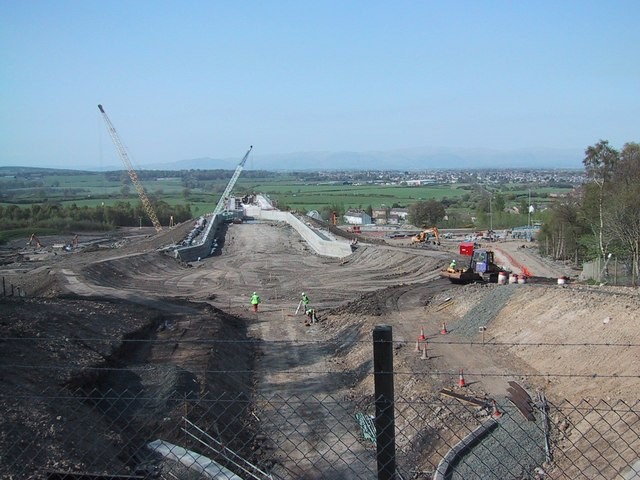 The Scottish government in 1998 approved a fantastic project “Millennium link” to an enthusiastic meeting of the new Millennium to solve at the same time, and the practical task of quickening the Scottish navigation. And spending to 84.5 million pounds, built a ship lift, which is now not only used for its intended purpose, but also became another landmark of Scotland.

On it is written in all the guidebooks, cruise the lake with UPS and downs attracts tourists from all over the world. Gateway part still left, and in the place where he built a Falkirk Wheel, the height difference is 24 meters (as an eight-story building). 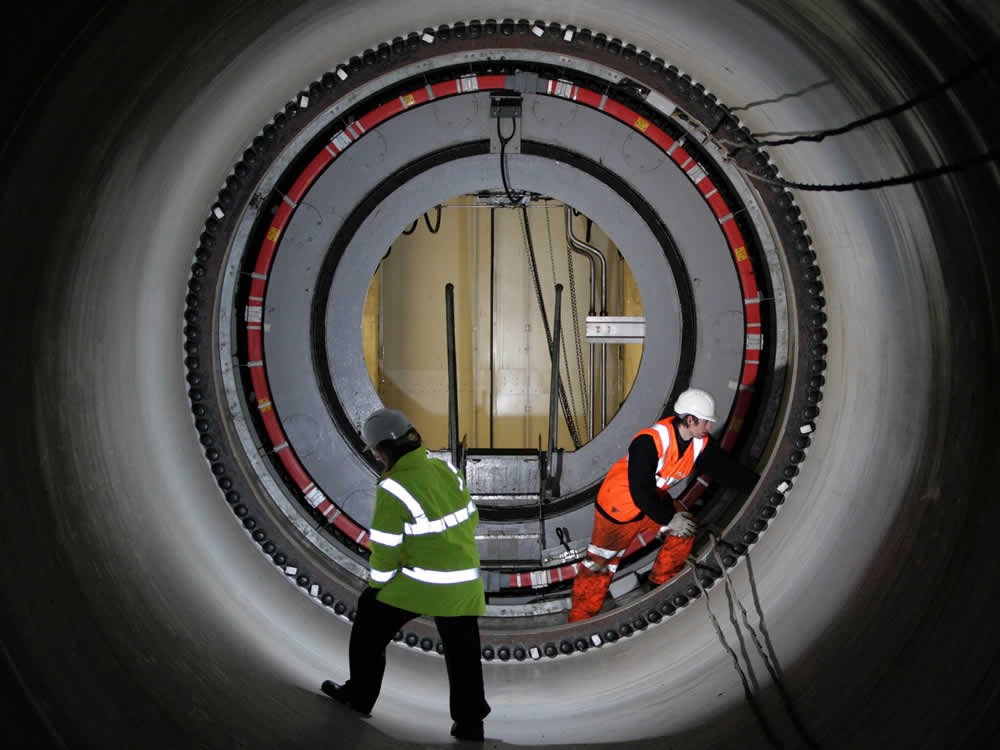 To the Millennium to finish did not, and the opening was timed to the 50th anniversary of the reign of Queen Elizabeth in 2002. The Queen attended the opening 24 may 2002, she also cut the ribbon. 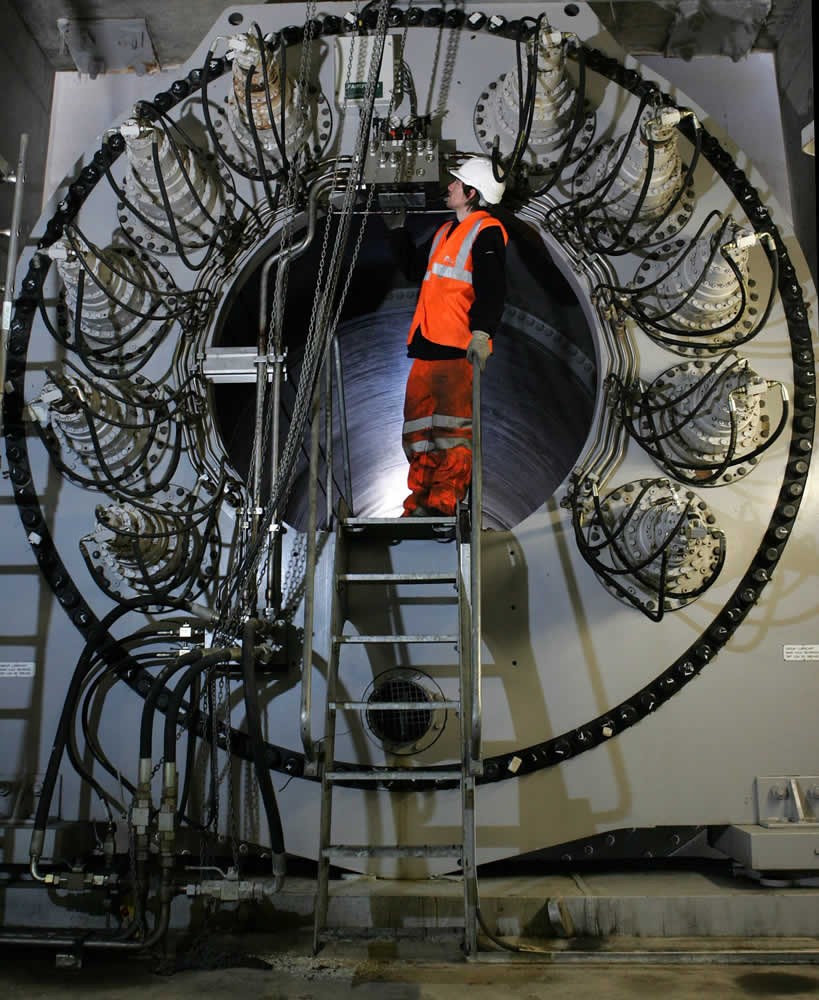 The name “Falkirk Wheel” (the Falkirk Wheel) no accident, for the ship’s hoist looks like two connected wheels of irregular shape (reminiscent of a Celtic axe). The diameter opposite each other are two huge bucket — one opposite the “upper” channel, the other — on the level “lower”. In both bucket go the boats that want to continue sailing in the next channel, i.e. the first need “from the top to the bottom”, and the second Vice versa. 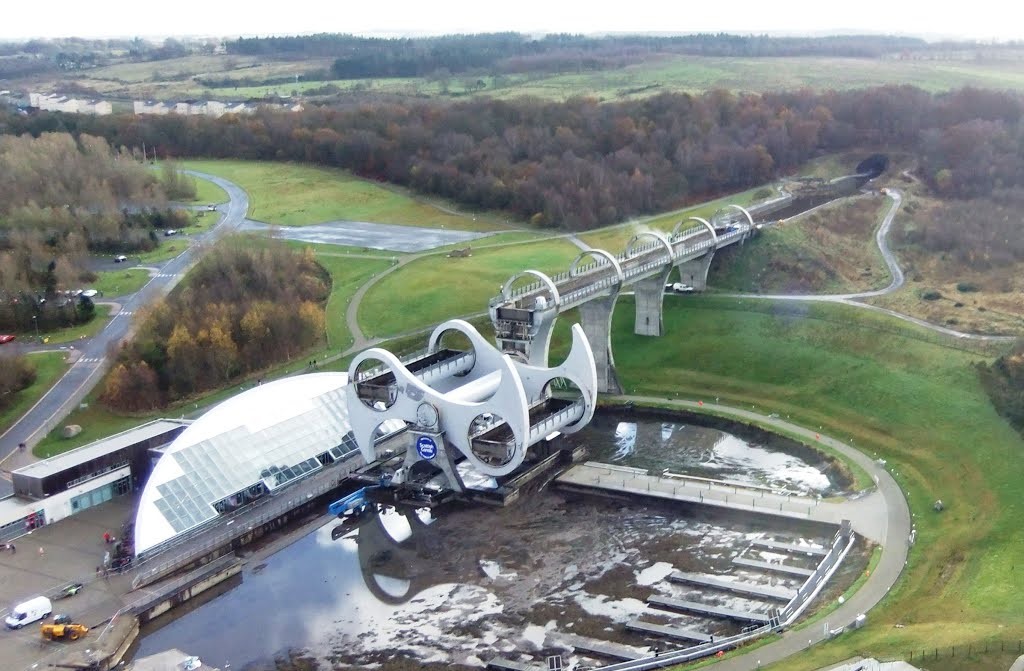 The weight of both buckets is aligned with water, then the top bucket begins to add water in addition — and it is under the force of gravity is lowered. It turns out superprimer for pupils, how does the physics (mechanics). In the end, additional electrical energy to turn such a huge Juggernaut takes just as boiling eight kettles of water. 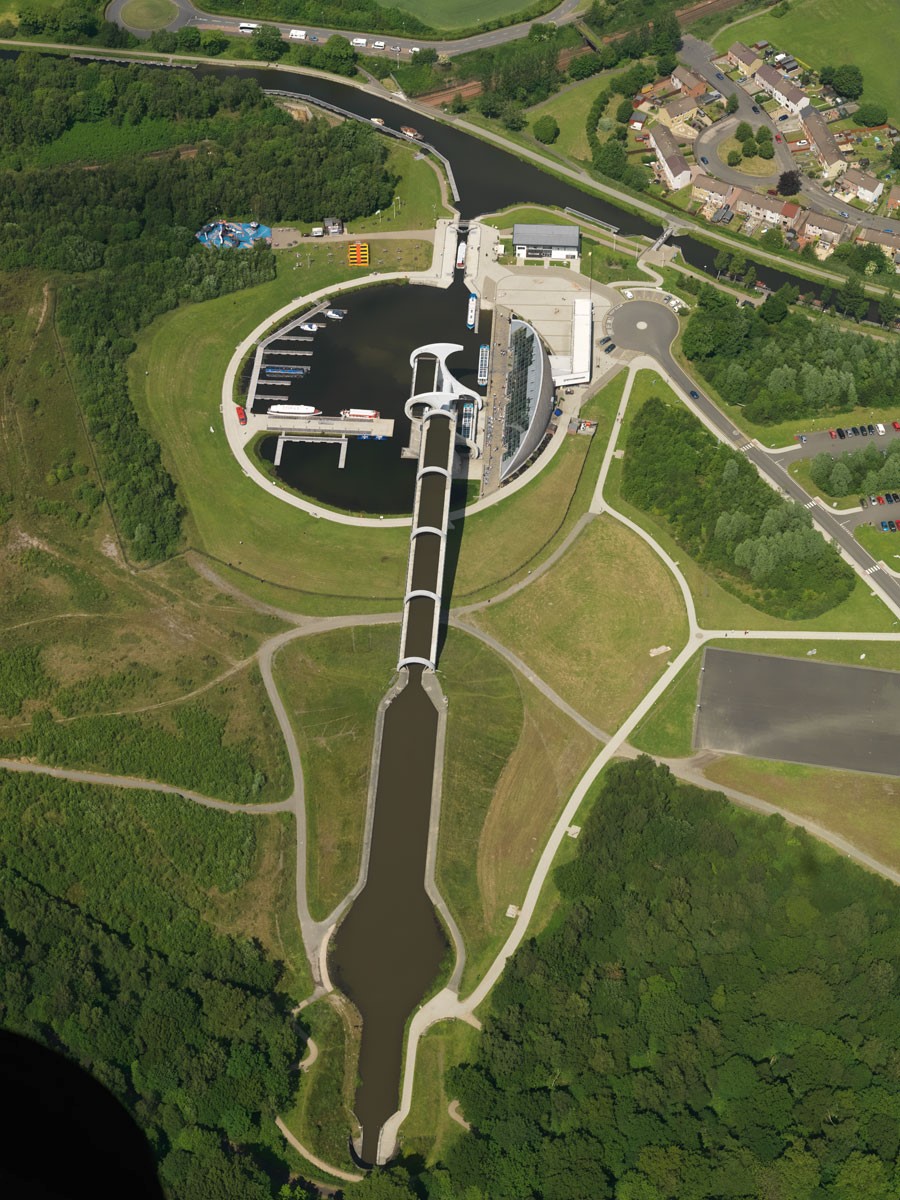 All Fullcircle wheel has a height of 35 meters and a weight of 1,800 tons. Watch the wheel spin is very interesting. It looks like the Ferris wheel, on the opposite points of which are attached two caissons, one is over the other.

Each caisson can swim the boats. The wheel slowly begins to rotate and rotates 180 degrees, bringing the top of the caisson is at the bottom and the bottom, respectively, at the top. After that for the floodgates to open, and pleasure boats continue their way. 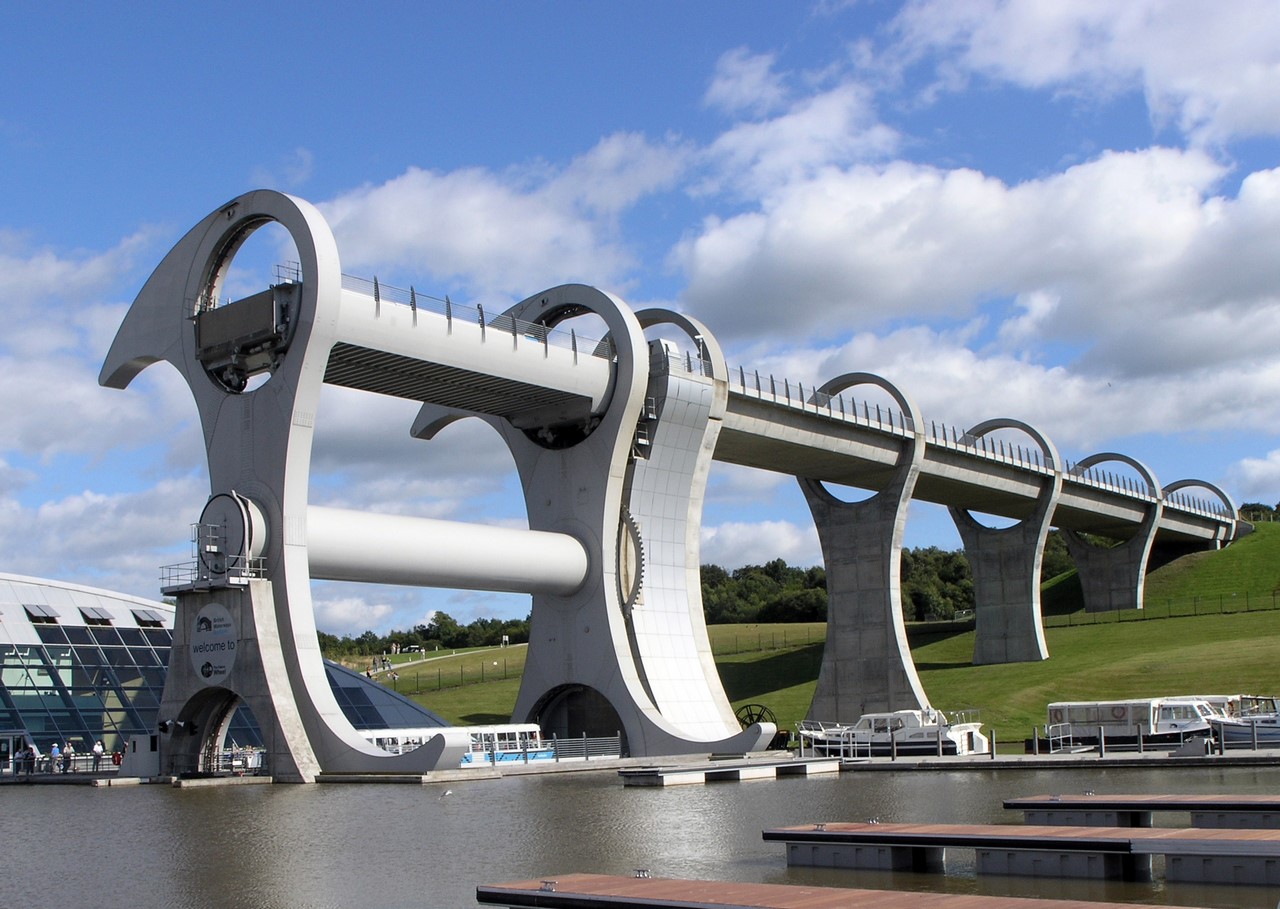 Then the wheel waiting for the next pleasure boats, and the procedure continues.

A crucial step for the operation of the device is the docking tray with the upper and lower channels. When docking chute tightly closed sluice gates are opened, allowing you to make the water level in the tray, and the channel is the same. Then the ship is free to go through the channel. This is the first and only rotating the ship lift in the world. 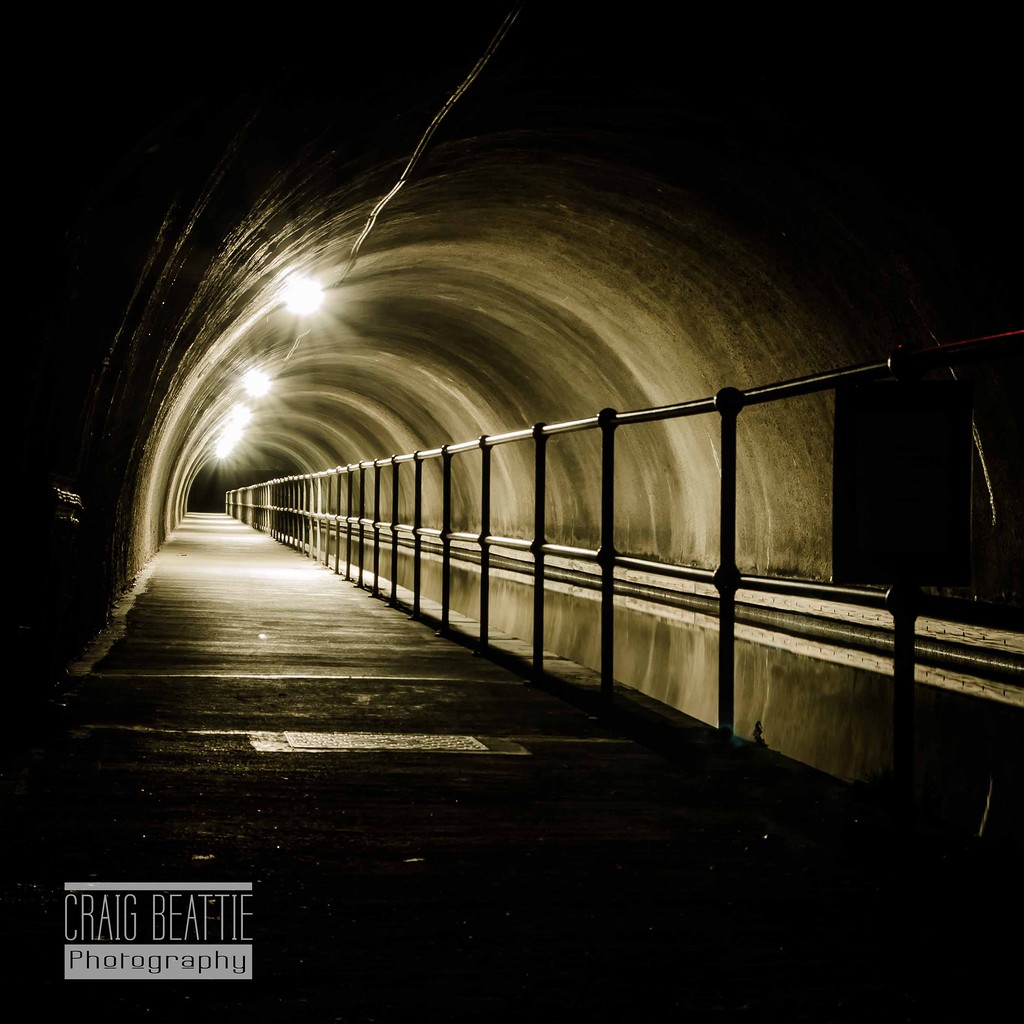 The time of revolution of the wheel — about 5 minutes. Agree, much faster than 3.5 hours. The question arises: how much energy must be expended to raise or lower a ship? 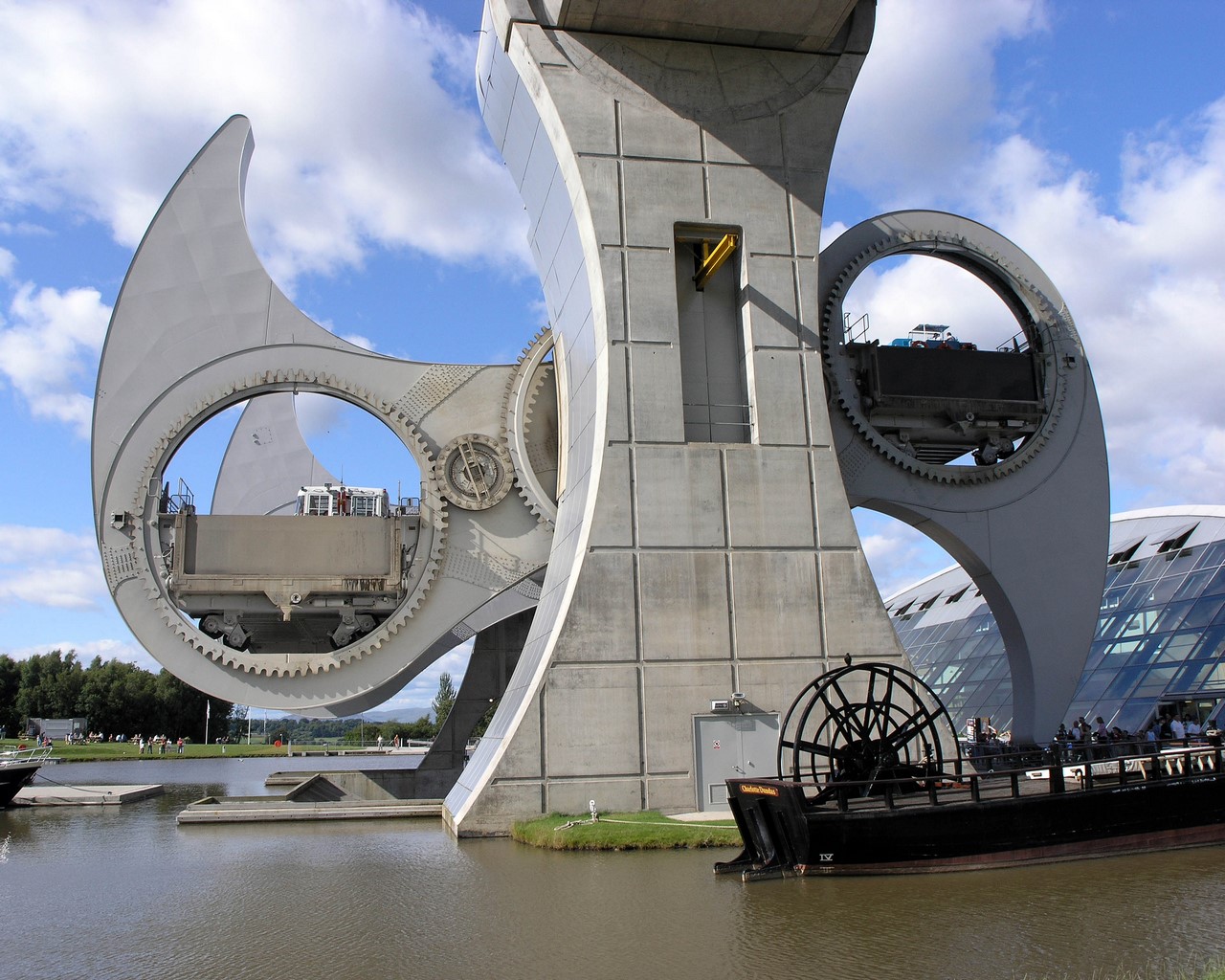 It turns out that only 1.5 kW, about as much electricity would it take to boil eight household kettles. This is because the weight of both the caissons are always the same. They balance each other and the engine need a little energy during the rotation. 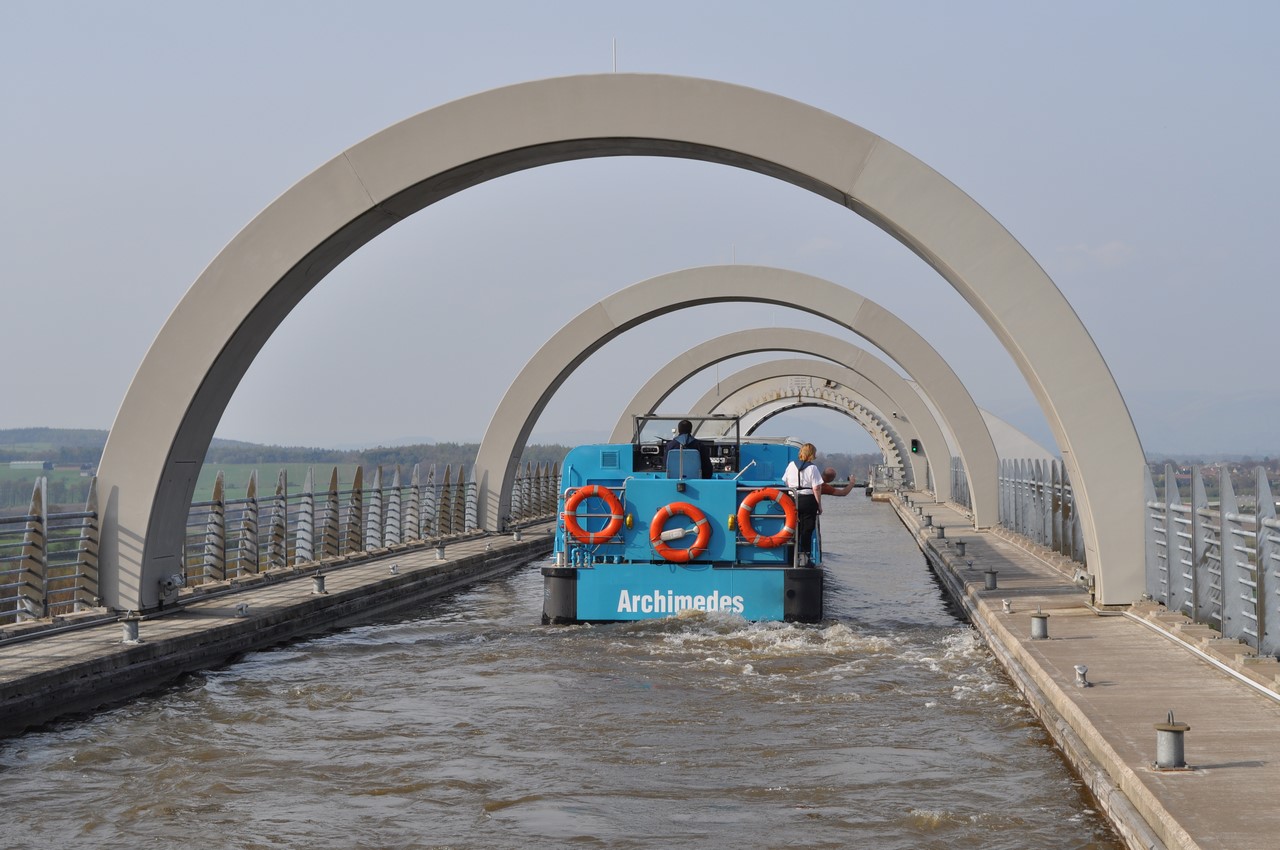 And how both of the caisson can equally weigh, if one of them only water and the other ship as well? The answer is simple. Recall school course of physics and the law of Archimedes. The ship, swim in the caisson, displaces exactly as much water as it weighs itself. Thus, the weight of the caissons at least with the ship, though without him is always the same and for rotating such an impressive mechanism required electric drive is very small performance is about 20 kW. The authors of the project give a guarantee on the engineering design for 120 years. 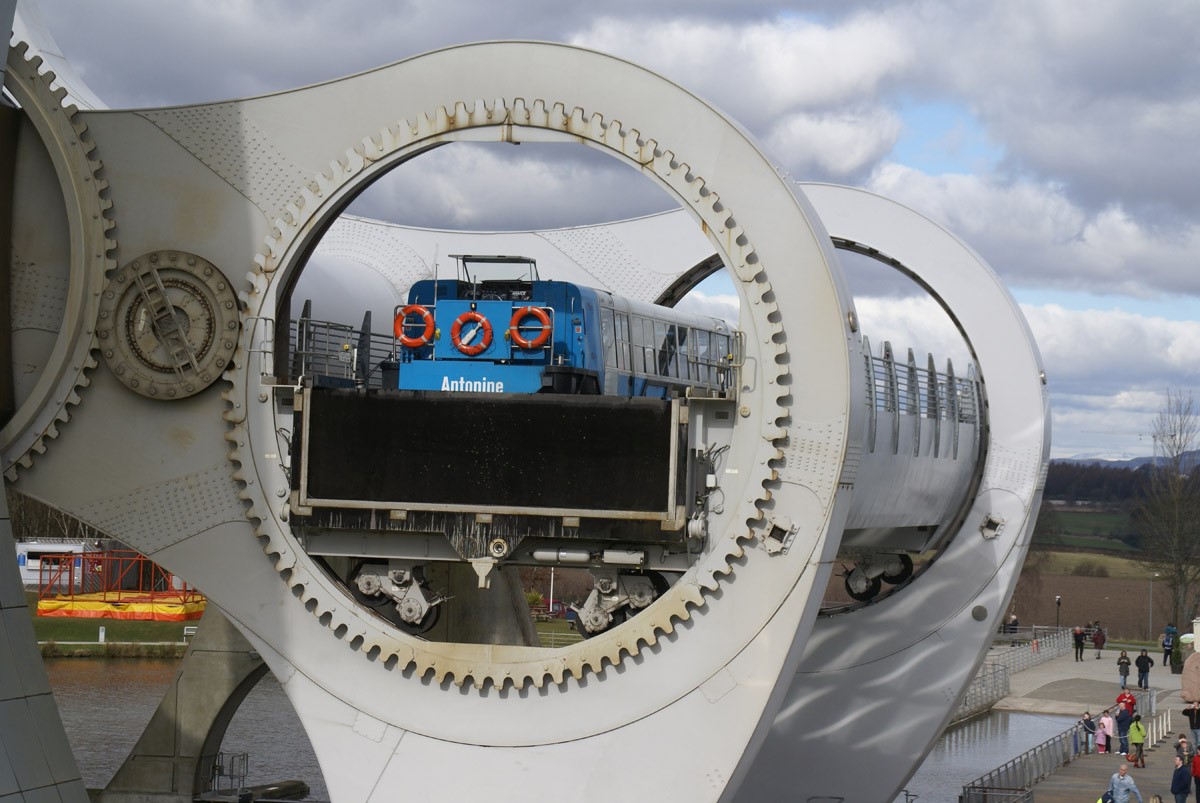 And now, some numbers. Each caisson holds 360 thousand liters of water, has a length of 21.33 meters width — 6 meters. Court going into the caisson should have the appropriate dimensions, a displacement of not more than 200 thousand liters, height above the water to 2.74 meters, landing below the water no more than of 1.37 meters. 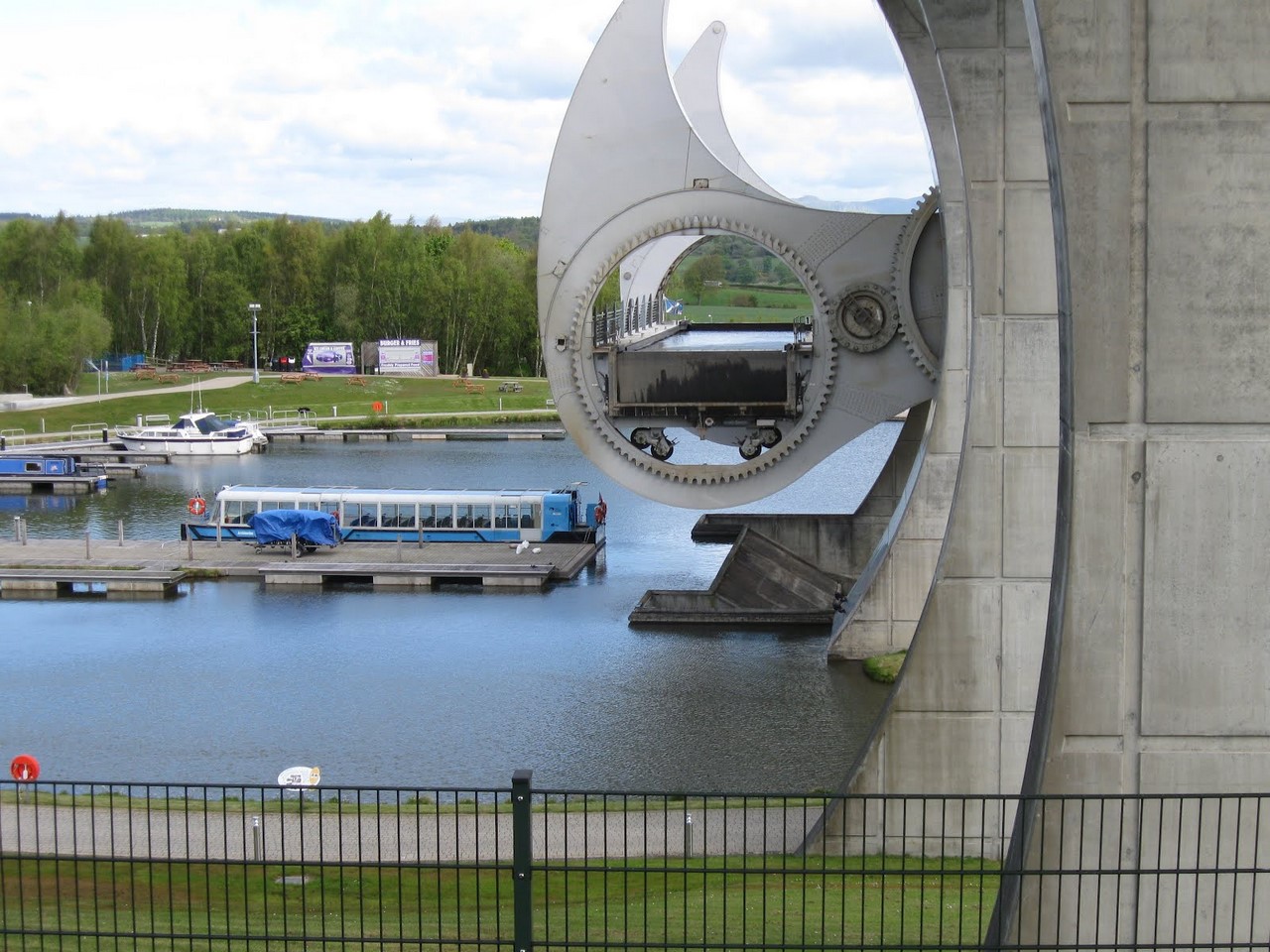 The lift is designed for vessels weighing from 50 to 600 tons, so, to the delight of tourists, they are mainly pleasure boats. There are cruises that last an hour, and it ships twice turns on the wheel as you go round-trip. In warm weather you can relax on the rather large lawn in front of the wheel and marvel at this Behemoth. In January, the wheel is closed. 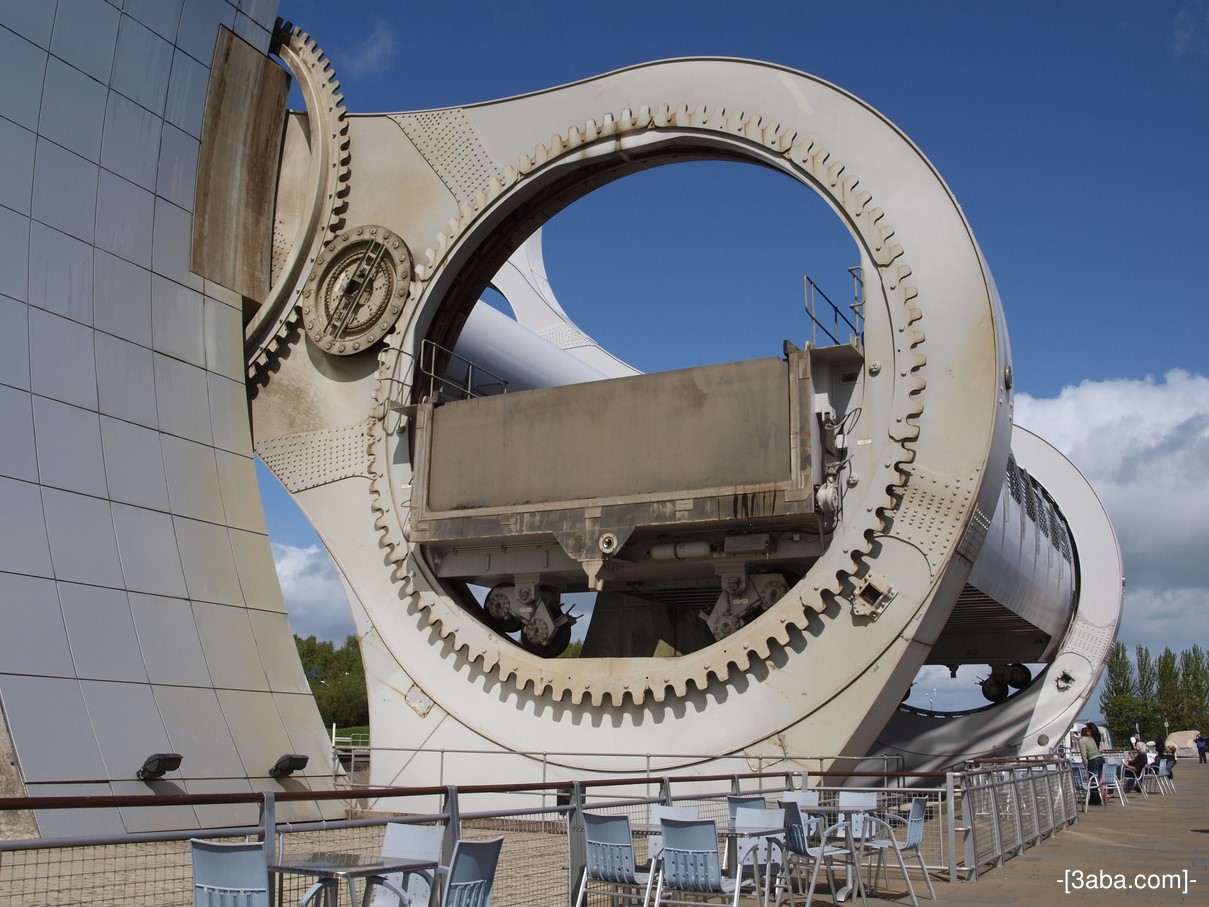 A serious problem arose during the construction of the aqueduct, connecting the Union canal with Falkirks wheel. The site had remains of the so-called wall of Antoninus. Wall, whose construction began in 142, during the reign of the Roman Emperor Antoninus Pius, passes through the whole Central part of Scotland to the mouth of the river Clyde. The result of a broad consultative process, it was decided to hold a channel under the wall. The construction of a 145-meter tunnel was carried out with great care, so as not to damage the ancient monument. 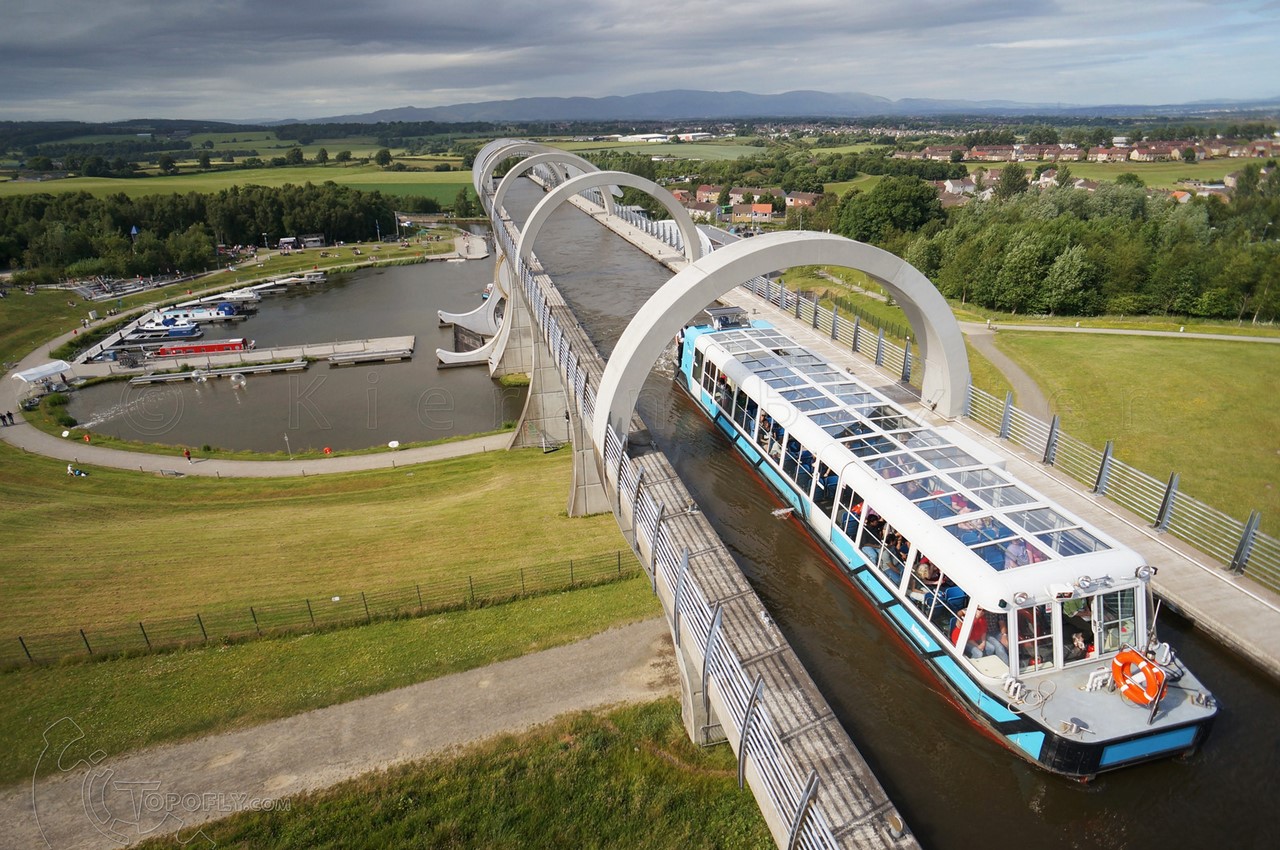 The project received the award of the Royal Commission of fine arts of Scotland (Royal Fine Art Commission for Scotland), which is not surprising as it is a miracle of modern engineering has attracted not only the British, but also tourists from around the world. With the advent of this extraordinary facilities Scotland, undoubtedly, has acquired another national symbol.

Enterprising Scots have managed to turn giant hydraulic structure in a light show. 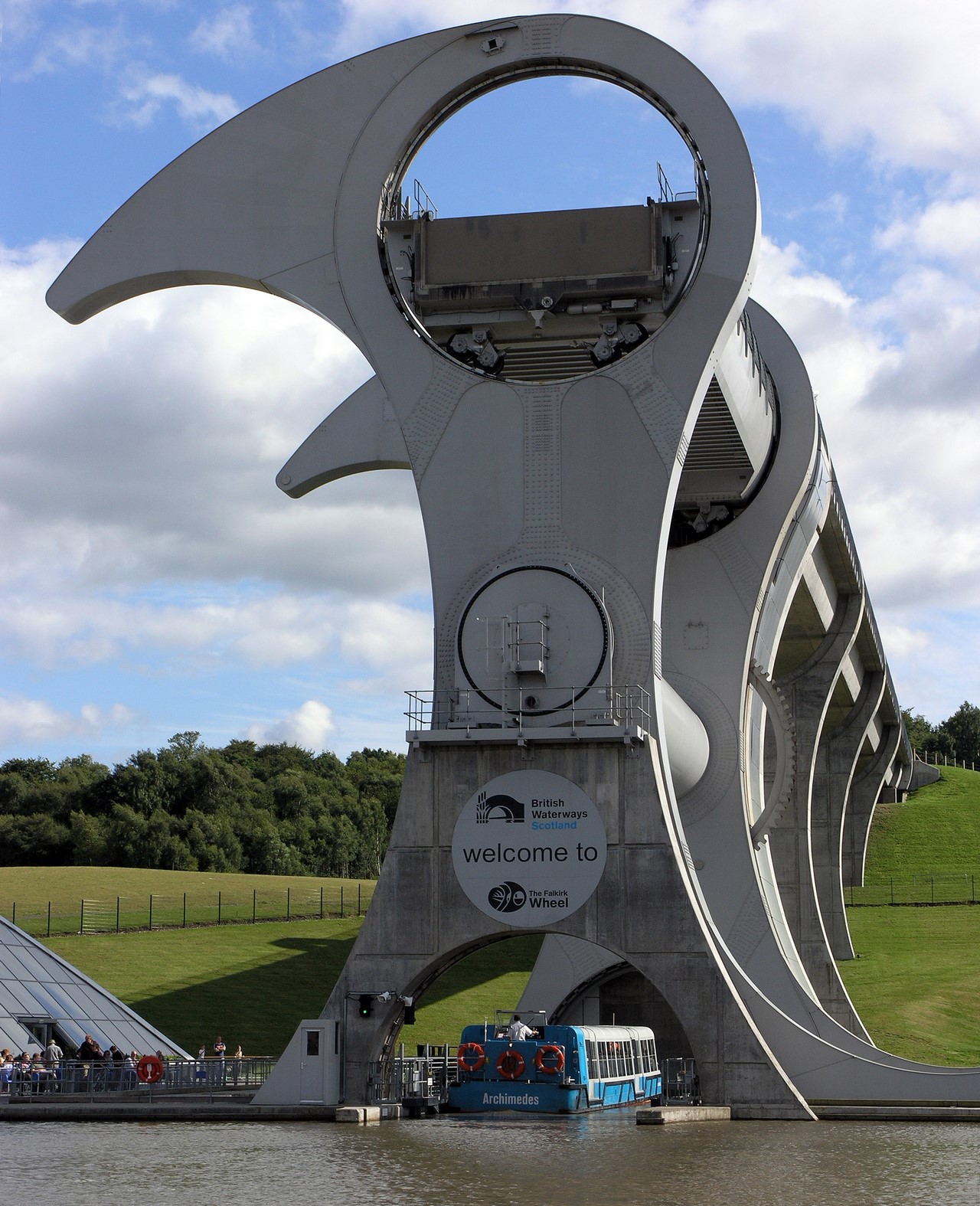 Rotation of the wheel takes place about once an hour. If you arrived a little earlier — you can wait for the next, there is a Museum of the construction of the Falkirk wheel and cafés. You can take part in the cruise on the lake that are organized here, in the tourist centre. A visit to the Falkirk wheel can be interesting for a child older than seven years. If you have very small children, then they will not be bored waiting for the “pivot” — they have a children’s play area with its mini-channel. 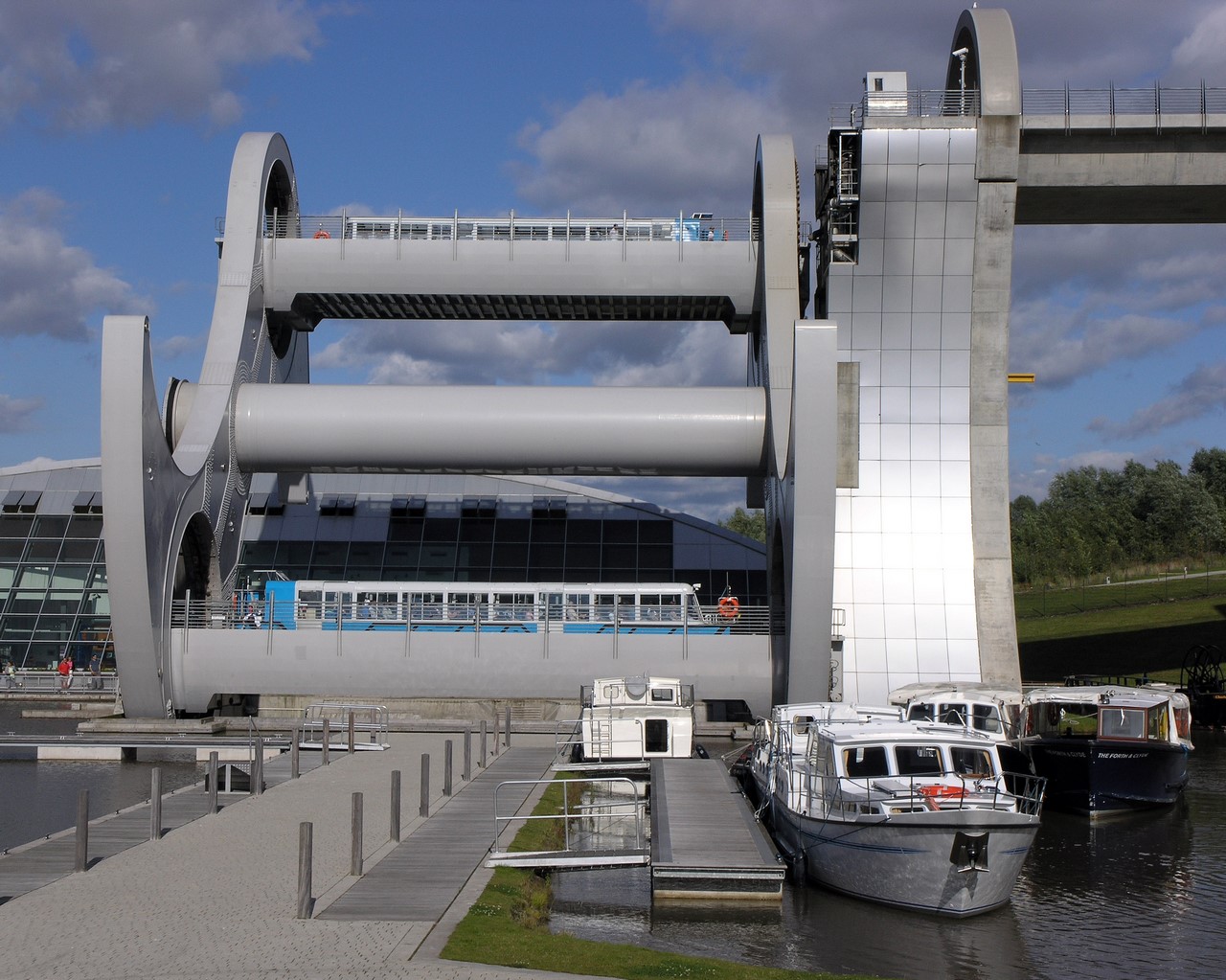 How to get to the Falkirk Wheel, you can look at the official website. There are all necessary information for trip planning (description, directions, schedule of pleasure boats). On the website you can also pre-book a boat cruise. Falkirk Wheel is located approximately 30 miles from both Edinburgh and Glasgow. The train stations of Falkirk Grahamston or Falkirk High Station. From a stop near both stations, the rims every 15 minutes there is a bus No. 3 Red Line. On Sundays the bus runs less frequently. 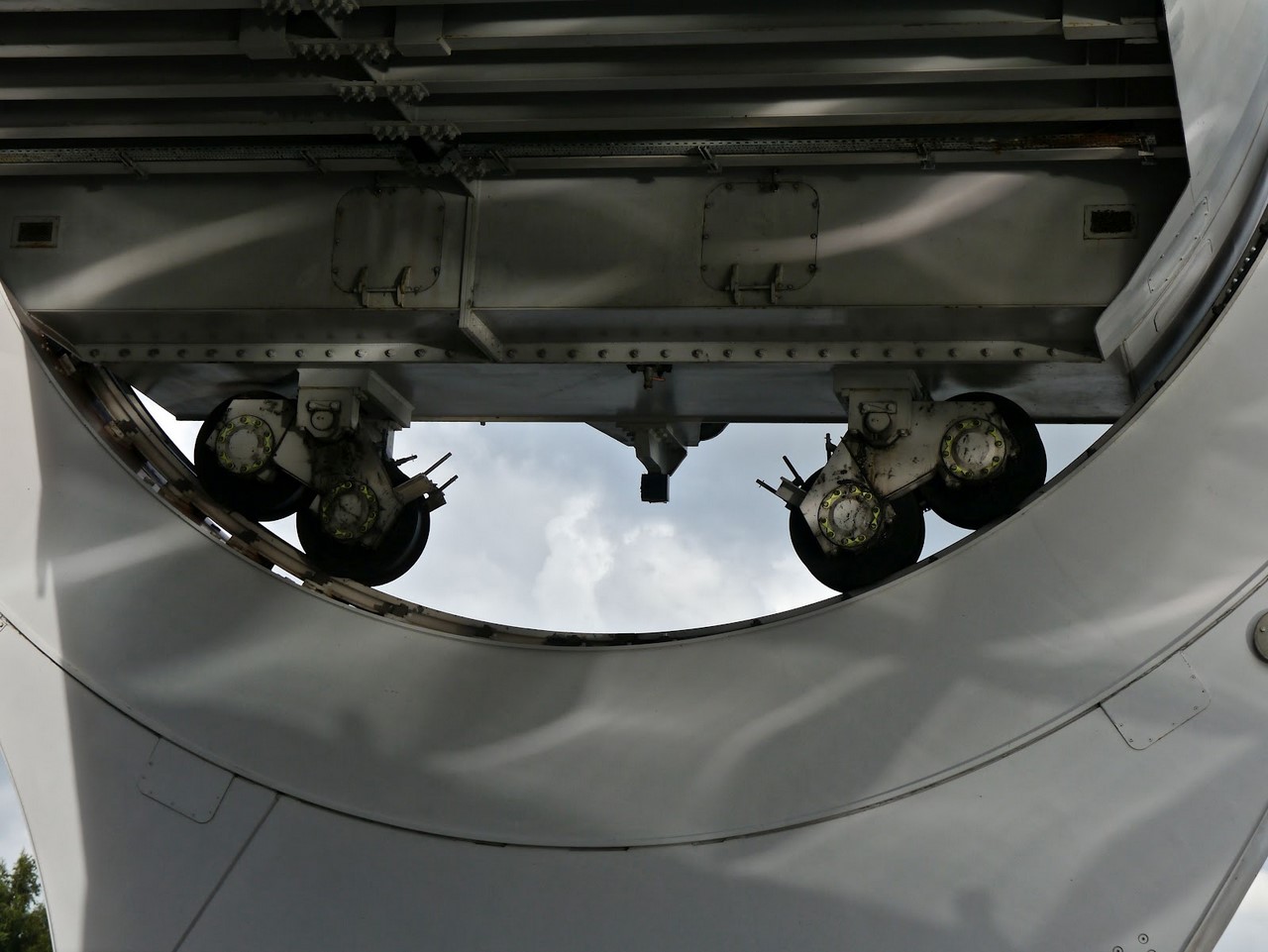 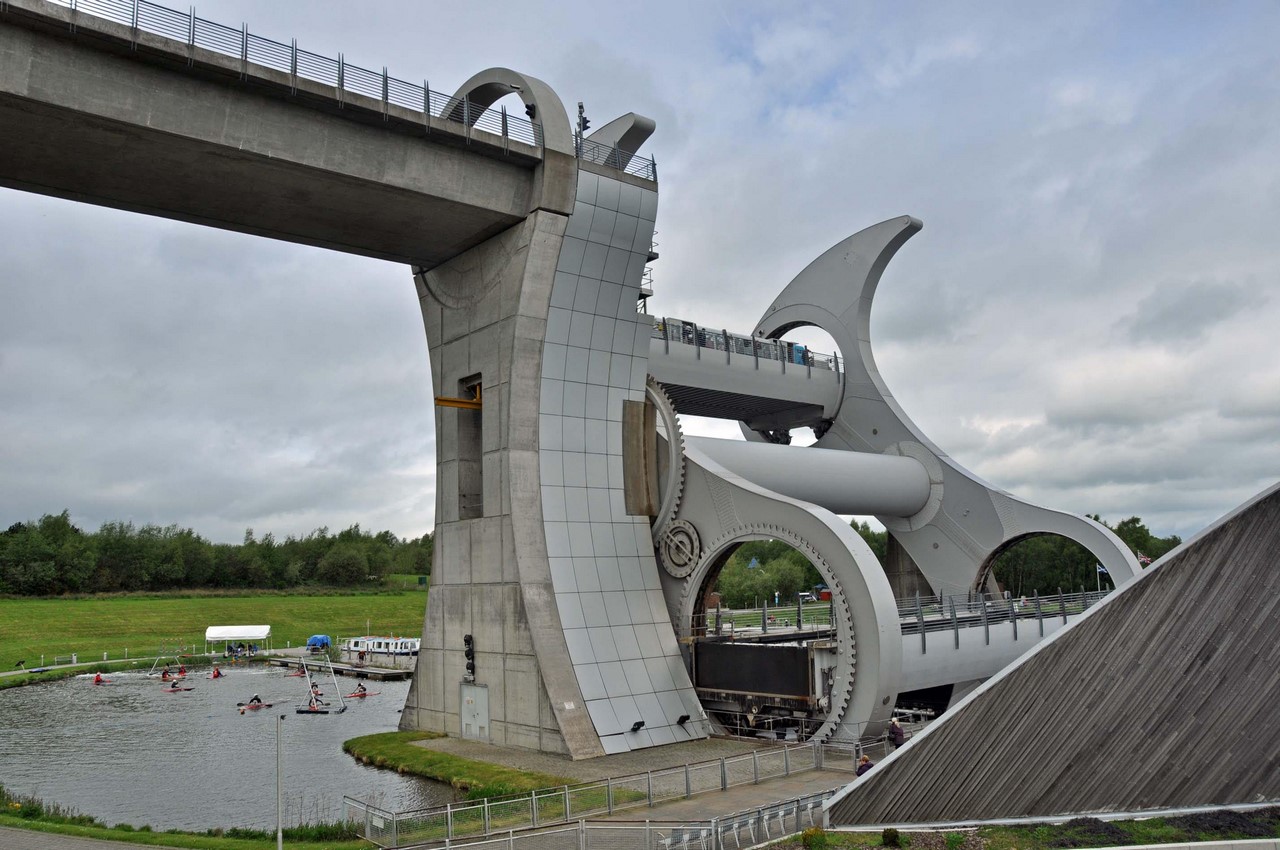 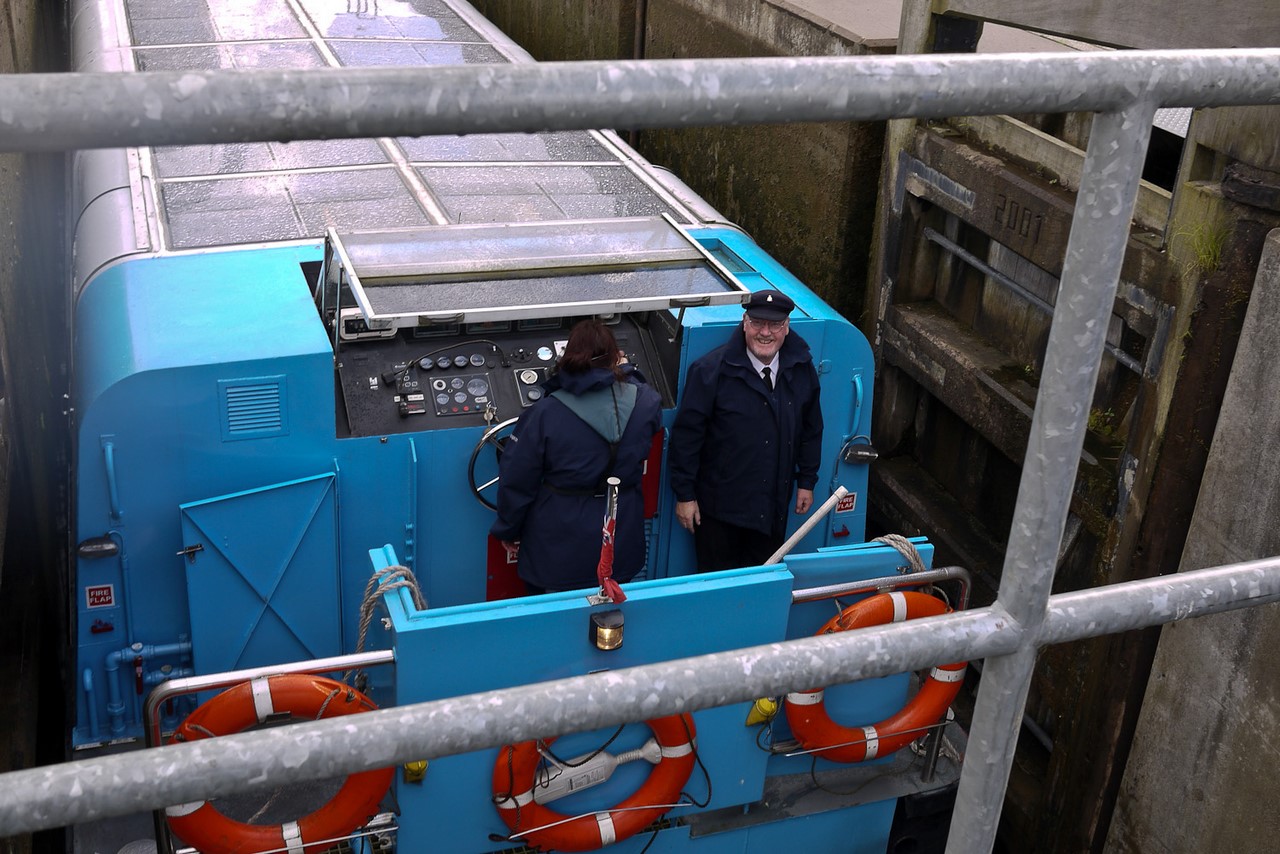 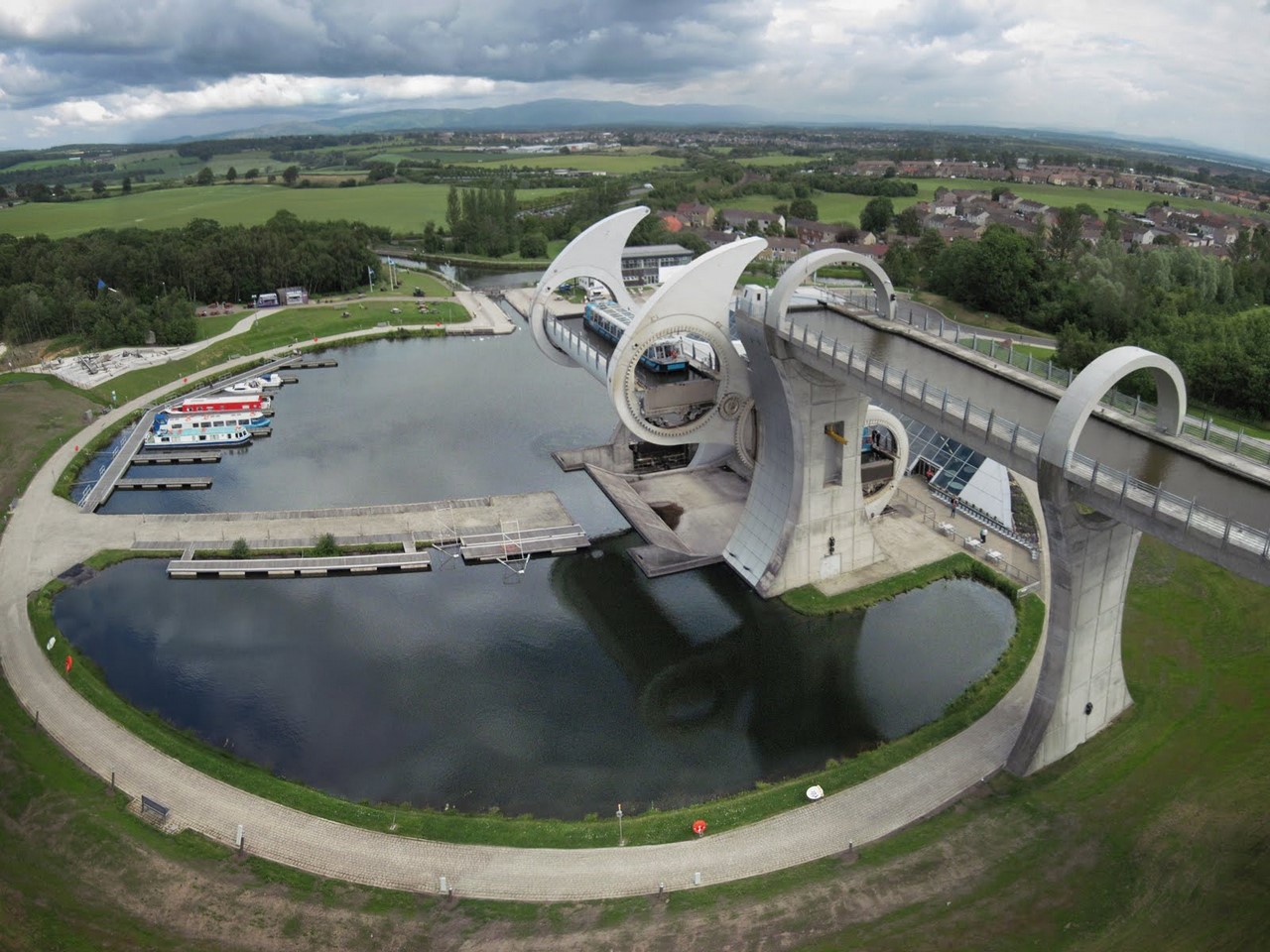 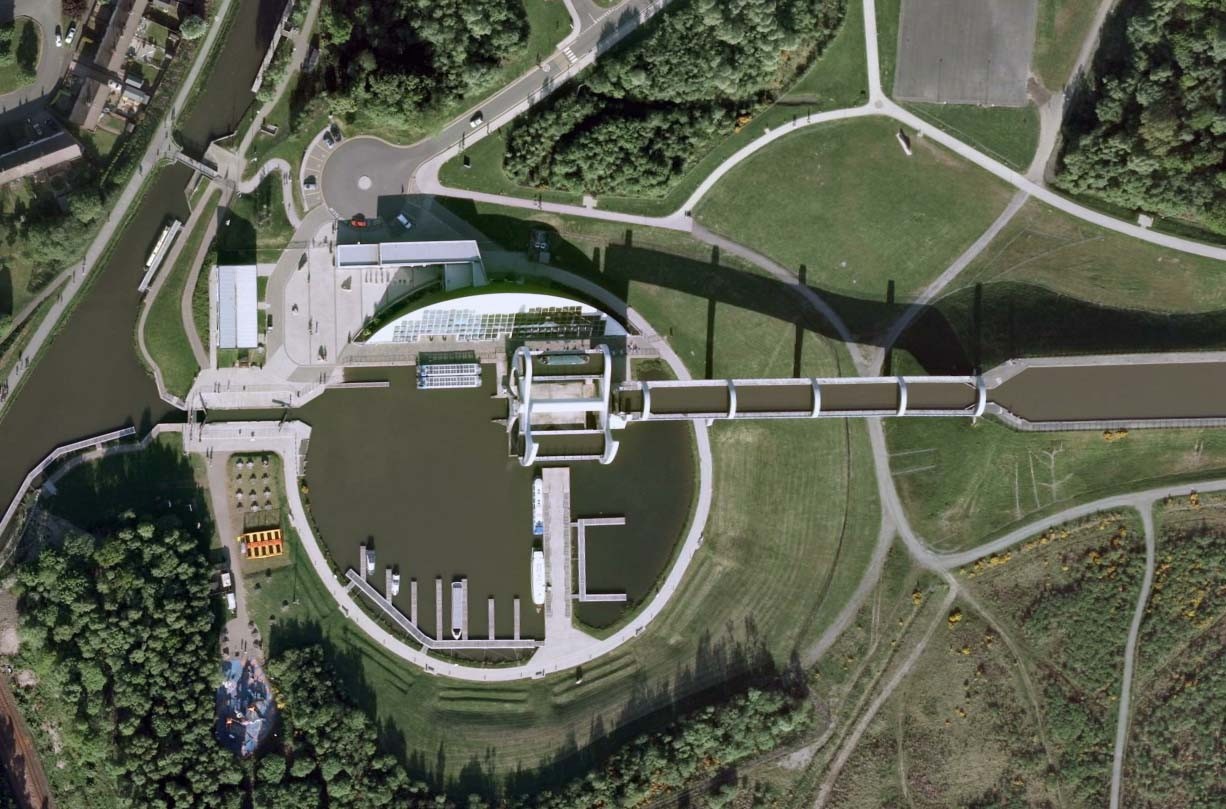 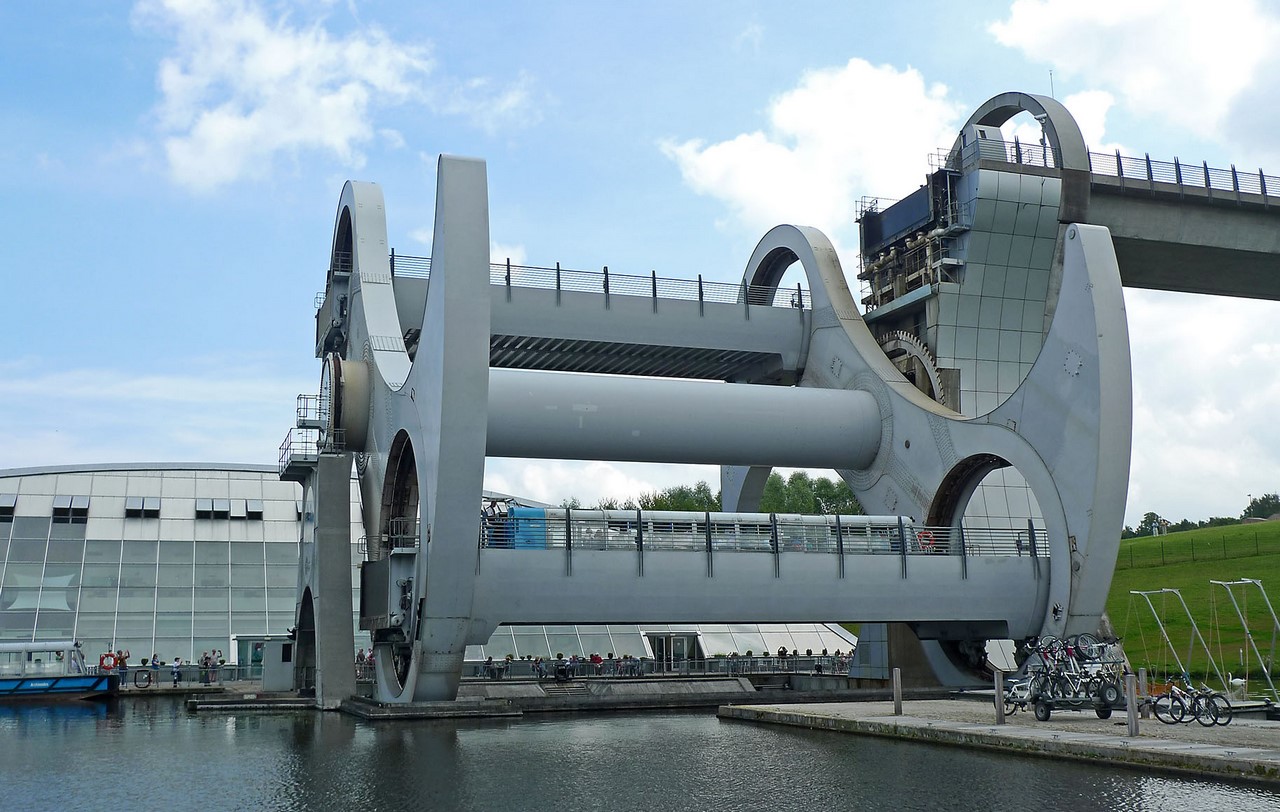 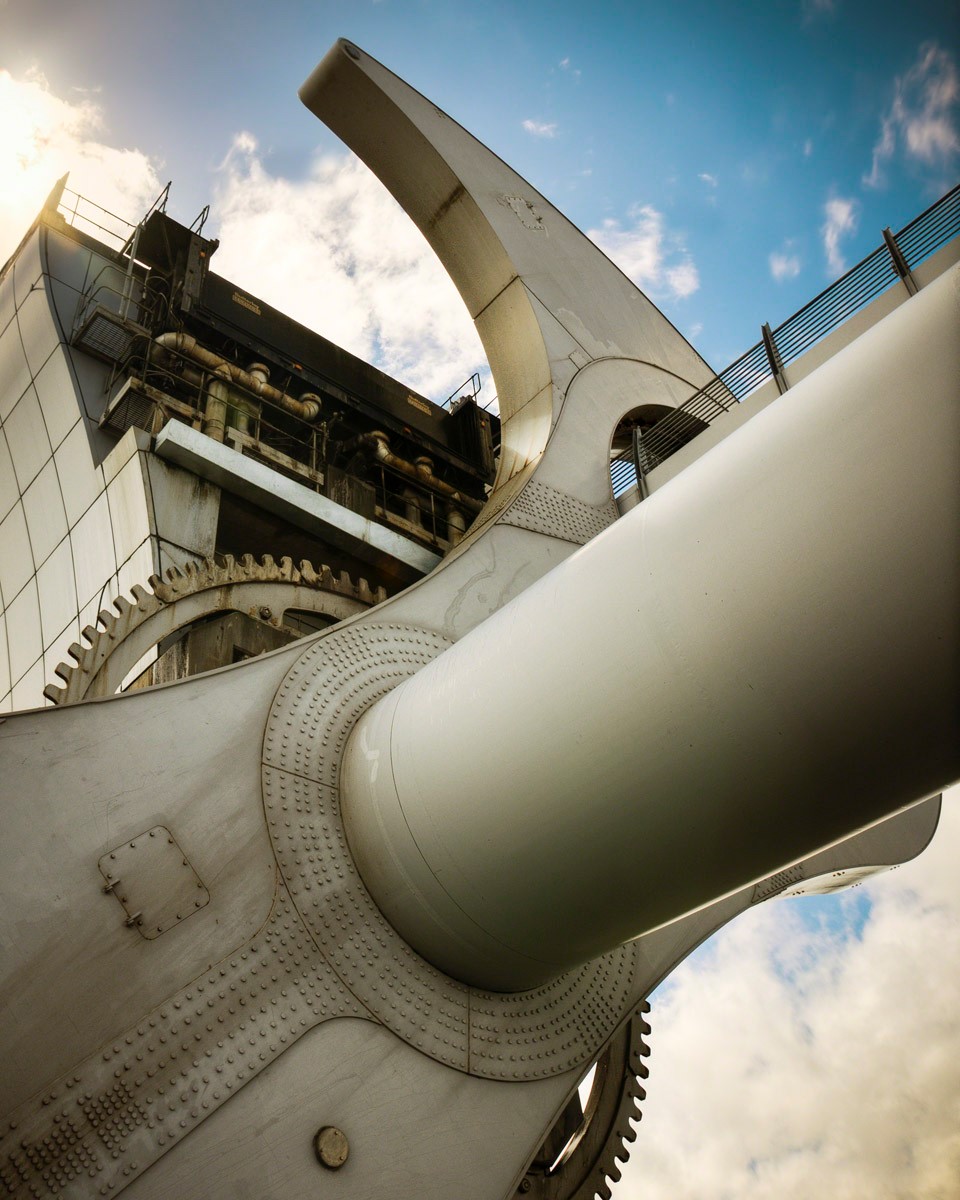 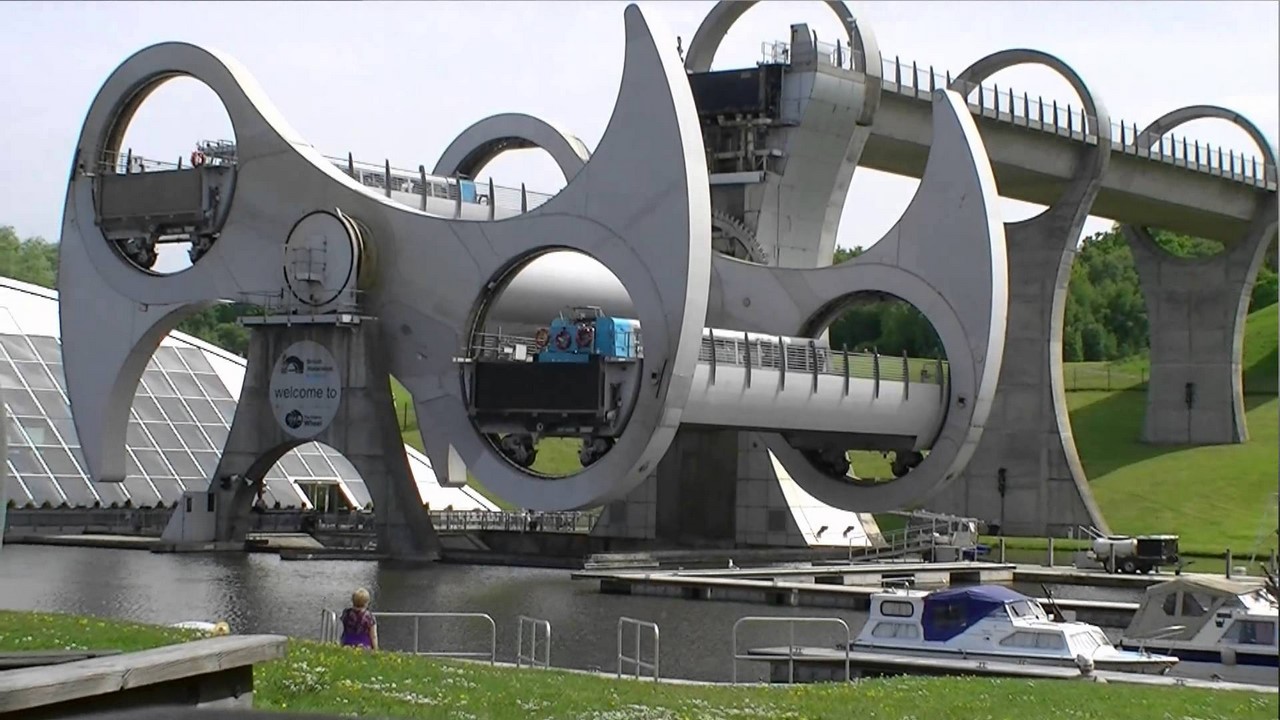 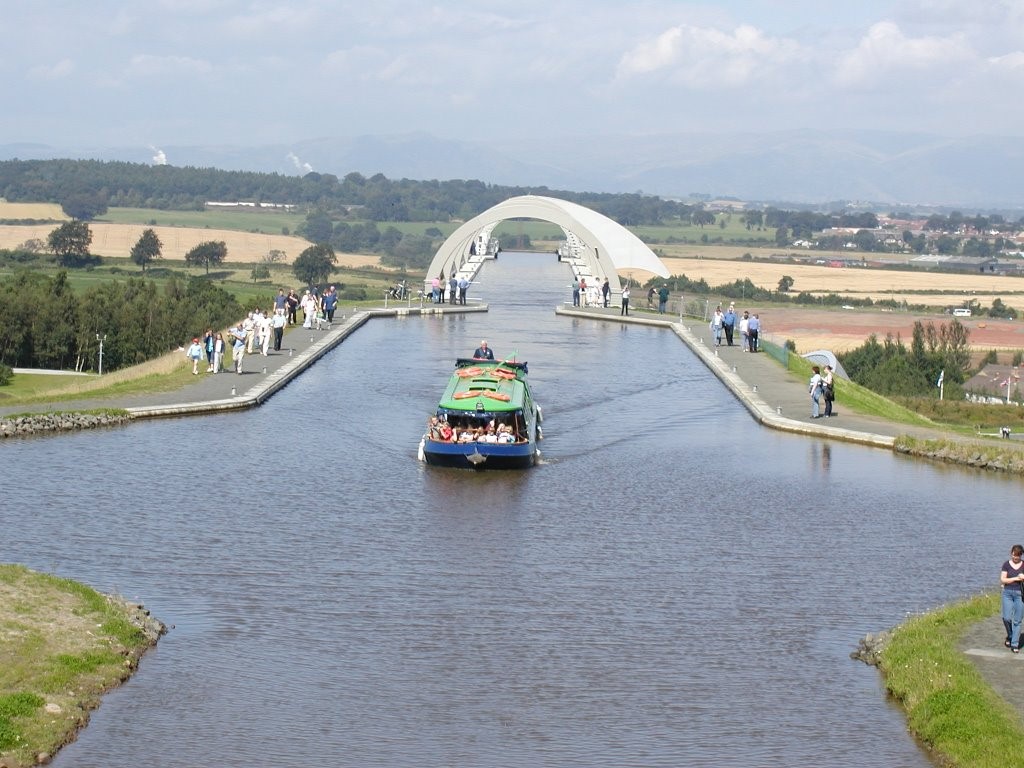