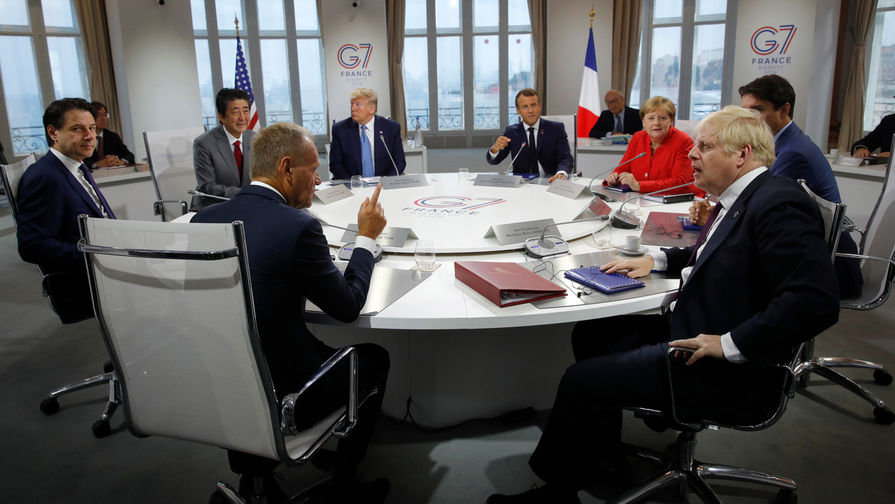 Japan insists on maintaining the existing structure of the “big seven”, that is, without Russia, India, Australia and South Korea. According to the Secretary General of the Japanese Cabinet, how to organize a summit of the G7 this year — decided by the US as a host, but changing the format is not worth it. Earlier, Donald trump has called for the inclusion in the composition of the group of seven and Russia, but has faced criticism by other members of the format.

The Secretary-General of the government of Japan of Yoshihide Suga commented on the intention of the American President Donald trump invited to the summit G7 in 2020, the leaders of Russia, South Korea, India and Australia. According to him, the Japanese authorities against changing the current format of the “big seven”, reports TASS.

“The case of the USA as the organizer of this meeting is to agree on the final form it might take. But we believe it is important to maintain the present structure of “seven” — said Suga.

He also refused to comment on the message that Tokyo opposed the invitation to the summit, South Korean President moon Jae-In. According to Sugi, the policy of Seoul concerning North Korea and the PRC “does not correspond to the General course of the G7”. However, to develop the theme he did not.

We will remind, the American leader Donald trump had previously called a “common idea” invitation to the G7, Russian President Vladimir Putin. According to trump, half of the topics, raised at the summits “the seven” it is necessary to discuss with Russia, so holding meetings “without Putin” — a “waste of time”.

The White house also reported the intention to transfer the G7 summit in September and to invite the Russian, Indian, Australian and South Korean leaders.

Other countries of the “sevens” met trump’s offer is critical. The Prime Minister of Canada Justin Trudeau has expressed opinion that Russia can return to the summit is not necessary.

“Russia remains outside the G7 there will continue to be,” said the head of the canadian Cabinet.

The Minister of foreign Affairs of Japan, Toshimitsu Motegi acknowledged that Russia needs to have a dialogue. “To promote the constructive role of Russia in solving international problems, it is necessary to talk,” he said.

According to the head of the Japanese foreign Ministry, other countries were invited to the G7 and earlier. Japan, he added, will continue to liaise with members of the format for this issue.

Finally, France is the reason for the return in the format of “big eight” with participation of Russia is not. The Elysee Palace said that there were “specific reasons” that Moscow was excluded from the G8. But at the same time, Paris acknowledges the importance of finding ways to dialogue with the Russian side.

Russia was in the G8 from 1997 to 2014. However, after the reunification of the Crimea with Russia in 2014, other countries-participants of the format have accused Moscow of meddling in Ukraine’s internal Affairs and had not been invited to the summits.

In 2018 trump said about the need for presence of Russia at the summit in Quebec city on 8 June before heading to Canada for a meeting with the heads of state of G7.

“Trump has called for Russia, which was excluded from the group of leading world powers after the annexation of the Crimea, to restore our participation [in the “big eight”]”, — stated in the message published by Associated Press.

The Prime Minister of Italy, Giuseppe Conte supported the proposal of the American President. “I agree with President trump, Russia should return to the “big eight”. It is in the common interest”, — said the Italian Prime Minister.

Statements by foreign leaders about a possible revival of the format “group of eight” with the participation of Moscow then commented the press Secretary of the President of Russia Dmitry Peskov. The official representative of the Kremlin said that the Russian side “does the emphasis on other formats.” By the way, in those days, Russian President Vladimir Putin was at the summit of the Shanghai cooperation organization in Chinese in Qingdao.

Dmitry Peskov, in turn, reiterated Putin’s position that Russia is not against joining the “seven”, but considers that the formats, including such countries as China and India, are more constructive.

Both his hands make a beautiful ornamental pond at the cottage