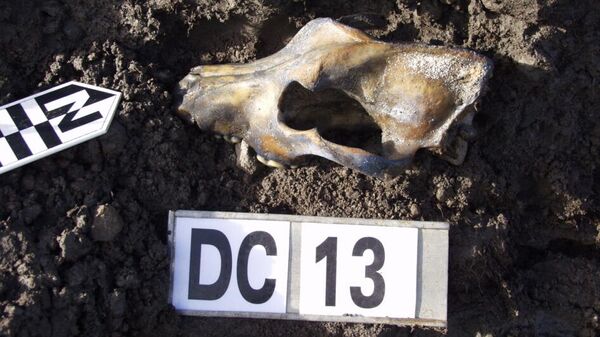 Scientists have found that the ancestry of modern dogs originated from domesticated ancestor that lived in Arctic Siberia 9.5 thousand years ago. To such conclusions experts cited the results of comparative genomic studies. Described in the journal Science.

The dog was the first animal that man domesticated. Since then, over many millennia, it performs a variety of functions, including helping to transport cargo. However, until now it was not known when the first sled dog, common today in many Nations of the North.

Some late Paleolithic sites of Siberia were found made of bone, resembling a zipper, which use modern Eskimos (Inuit) dog sled race. During excavations Rogovskoy Parking on zhokhov island, archaeologists have discovered the oldest evidence of the use of the transport kennel — details of the sled and skeletal remains of dogs from the age 9-8 thousand years. By the bone structure, scientists assumed that it was just sled dogs.

In the framework of the international project QIMMEQ for the study of sled dogs scientists, among whom were Russian scholars, received the oldest complete genome of a dog. The work was supported by a grant from the Russian science Foundation (RNF).

Nuclear DNA was extracted from the mandible of a dog from Rogovskoy Parking, which amounted to 9.5 thousand years, and, for comparison, of the lower jaw of the wolf Yang the Parking lot by the age of 32 thousand years. Also samples were taken from ten modern Greenlandic sled dogs.

Transcribed DNA sequences were compared with materials from 114 dogs and wolves from different parts of the world. It is noteworthy that the genome of the dog of Rogovskoy Parking was the most ancient of all dog fully transcribed sequences.

The results showed between the ancestors of dogs and wolves, in particular, belong to the Yang paleopopulations from the Parking lot — there was an active exchange of genes. They freely crossed, which is normal for canids of the same size class, standing close to each other in an evolutionary sense. However, further artificial selection followed the path of weeding out the hybrids, therefore, genetically sled dogs, including fossil dogs Rogovskoy Parking lot, very different from modern wolves.

Based on the results of radiocarbon Dating and estimates of the respective mutations can be assumed that sled dogs as a specialized form appeared about 9.5 thousand years ago. Ahoskie dogs appeared to be genetically closer to modern sled dogs, Malamute, husky and Greenland dogs — and dogs that lived with people in America four thousand years ago than to the modern home.

“Our data refute the view that the modern breed of sled dogs occurred two to three millennia ago — are in the press release of the RSF, the words of the first author of the study Mikkela of Holger Sinding (Mikkel-Holger Sinding) from the University of Copenhagen. — In addition, we were able to establish that they first appeared in the tundra of Arctic Siberia.”

The results expand the knowledge on genetic differences between dogs from members of other species. Deep enough the differences between them are connected, first, with special food in the North is used much more fatty foods. Second, the sled dogs are adapted to the physical work in cold conditions. They have developed genes of proteins involved in relaxation and increased permeability of blood vessels, which allows better absorb oxygen and increases endurance. These proteins probably serve as cold sensors — like found in woolly mammoths.

“Sled dogs and people in these communities have a common history length 9.5 millennia: they lived together, they moved over long distances and hunting. Joint adaptation could not fail to leave an imprint on the genome of animals. The tradition of dog sledding in the population of the far North, apparently long existed, and in some areas of the Arctic still exists, however, in the North of Eurasia, it is likely to have been superseded by the use of reindeer sleds in connection with the spread of reindeer herding in some regions” — concludes the project Manager for the RSF grant Vladimir Pitulko, one of the study’s authors, candidate of historical Sciences, senior researcher of the Institute of history of material culture Russian Academy of Sciences.

Thus, adaptation to environmental conditions and exercise regime appeared among the ancient dogs found on the zhokhov island, at the genetic level, indicating a fairly long selection by man in the interest of a variety of dogs with a specific driver functionality.

In the video, the participants of the rally to support trump shouting "white power". Trump retweeted this