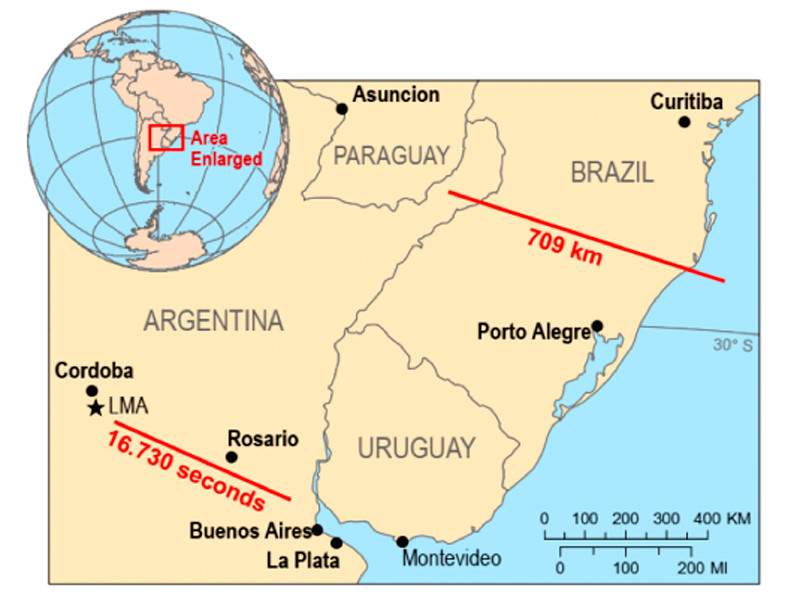 The Committee of experts of the world meteorological organization (WMO) has recorded two new world records observed maximum length and observed maximum duration of a single flash of lightning in Brazil and Argentina, respectively.

New records of “megaspider”, confirmed the new technology of satellite imagery of lightning, more than double previous rates recorded in the United States and France.

Now the longest in the world the lightning flash is a single flash, which is 31 October 2018 overcame a horizontal distance of 709 ± 8 km in some regions of southern Brazil. This is equivalent to the distance between Boston and Washington in the USA, or between London and the border of Switzerland near Basel.

And the maximum duration of a single flash of lightning was observed in the zip-with the constant development over the Northern part of Argentina and was recorded on March 4, 2019. It is 16,73 seconds.

The previous record for the greatest distance traveled by a single flash of lightning was recorded in the territory of Oklahoma in the United States June 20, 2007 and amounted to 321 km from both the prior and a new record for measuring the length of flash was used the same methodology to measure the maximum distance on a great circle.

The previous record duration of a single flash of lightning was continuous of 7.74 seconds and was recorded on 30 August 2012 in the sky over the French region Provence-Alpes-Cote d’azur.

“This is an extraordinary record of individual flashes of lightning. Extreme events of the environment is the living measure of power of nature, and scientific progress, allowing you to make the appropriate evaluation. It is likely that there are even more powerful extremes, and we can observe them with the improvement of technology for detection of lightning,” said Professor Randall Cerveny, the main Rapporteur on weather and climate extreme events the WMO.

“This will allow us to obtain valuable information for establishing limits of the scale of lightning – including MegaSpace – for the purpose of conducting engineering operations, security and for scientific purposes”, – he added.

The new data was published in the journal of the American geophysical Union’s Geophysical Research Letters on the eve of the International day of lightning, which will be celebrated on June 28.

In WMO noted that lightning is an extremely dangerous phenomenon, which annually takes many lives. The obtained data emphasize important aspects of concern from the point of view of lightning protection of society from electrified clouds that can carry lightning to the extremely large distances (the 30-30 rule – if the time between flash and thunder is less than 30 seconds, go inside! Then wait 30 minutes after the last flash, before you can get some fresh air).

And in India, where thunderstorms each year lead to the death of a large number of people, for the last 36 hours from lightning and related incidents killed 137 people in the States of Bihar and Uttar Pradesh, reports Stormnews with reference to All India Radio.

A large part of fatalities in lightning. Other incidents of the Indian media did not specify. It is known that lightning also caused considerable damage to houses and property of the inhabitants.

In the state of Bihar victims of lightning steel 113 people, 49 were injured. Most of the dead were farmers who worked during inclement weather in the fields. In the state of Uttar Pradesh- 24 dead, injured 12 people. The people here during the storm was also on the sidelines or hiding under the trees.