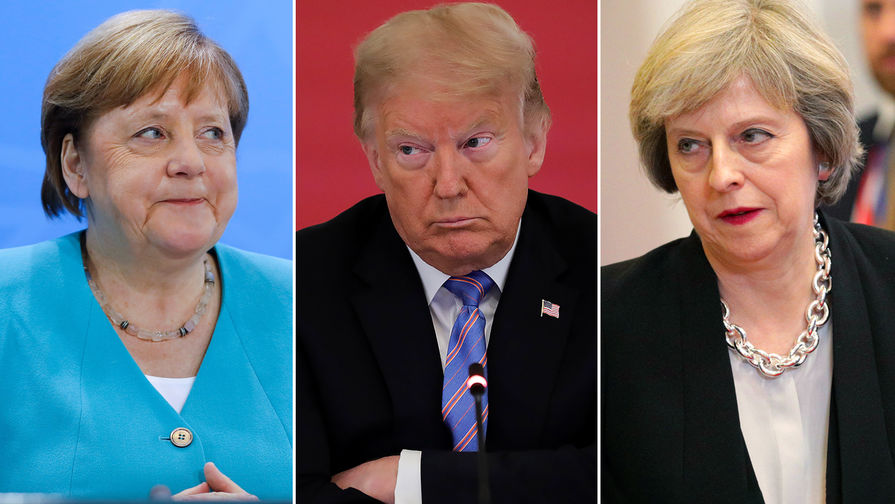 Donald trump during secret telephone conversations called Chancellor Angela Merkel “stupid”, and former Prime Minister of great Britain Teresa may “fool”. The President of the United States in every way slighted and humiliated leaders from among the key allies of Washington, according to the media. However, in talks with leaders of Russia and Turkey used a completely different approach.

The US President Donald trump on the phone regularly “bullied and humiliated” the leaders of the States among key allies of Washington. According to sources of CNN among current and former us officials and other countries

the head of the White house particularly harshly attacked the German Chancellor Angela Merkel and former Prime Minister of great Britain Teresa may.

During secret talks with the head of the German Cabinet, according to sources, trump has called Merkel “foolish” and said that she is allegedly under the influence of Russia. The speech of the President of the United States was “almost sadistic”, said the TV channel.

“The greatest rigidity of the he shows to those who look like wimps, and it is the weakest with those with whom it needs to be tough,” added one of the sources.

This behavior trump allegedly used in conversations with Mei while she was head of the British government. In particular, the US President called her “spineless fool” because of her approach to Brexit and immigration problems.

If Merkel when it endured attacks trump, the Mei became “excited and nervous” during interviews with the American leader. CNN sources indicate that the President of the United States clearly tried to intimidate the British Prime Minister, but for what purpose it is impossible to say.

However, got it from trump, not only the leaders of Germany and Britain, but the head of the France Emmanuel Macron, Prime Minister of Canada Justin Trudeau and his Australian counterpart Scott Morrison.

Of the trio the most attention to the sources of the TV channel pay to the conversations of the President of the United States with his French counterpart, who himself initiated a large part of the conversation.

The French President often tried to convince trump to change his policy in relation to environment and security, including climate change and the US withdrawal from the nuclear deal with Iran. However, caused only irritation of the President of the United States, which was accompanied by a personalized “verbal floggings”. In particular, trump criticized Him for the fact that he allocates enough funds for the expenses of NATO and spends too liberal immigration policy.

At the same time, the stiffness of the President of the United States and key allies does not affect the negotiations with the leaders of other countries. Especially CNN focuses on trump conversations with presidents of Russia and Turkey Vladimir Putin and Recep Tayyip Erdogan.

According to sources the channel, they are often “outplayed” his colleague, which made a number of American officials to count the U.S. President a threat to national security.

In particular, trump allegedly did not prepare for the phone talks with Putin and generally trying to make his colleague a good impression, however, by the critics of the former presidents of the United States.

“In his conversations with Putin, the President spoke mostly about himself, often in excessive, self-deprecating terms: touting their “unprecedented” success in building the U.S. economy; claiming derisive language, how he is smarter and “stronger” than “feeble-minded” and “weaklings” who were before him”, — tells one of sources.

Overall, a preoccupation with trump on themselves and their own interests can be traced in talks with all world leaders stressed to CNN about his wealth and success, he even told the North Korean leader, Kim Jong Ynu, again reinforcing these words with criticism of his predecessors.

The greatest concern among sources channel trigger conversations trump with Erdogan. In their opinion, the leader of Turkey used low awareness of U.S. President about the situation in Syria and the middle East in their favor.

“The President’s decree on the withdrawal of American troops from Syria, which was then allowed Turkey to attack Syrian Kurds, was directly linked with the ability of Erdogan to deal with trump in the phone calls”, assured sources of the TV channel.

Of particular interest is the frequency of calls Erdogan’s Trump, the Turkish leader allegedly has access to the personal schedule of their American colleagues and in fact always aware of its availability for the call. Because of this, many conversations of presidents occur without prior notice.

Official confirmation of the claims of sources CNN talking about trump yet, U.S. officials and diplomatic representatives of other countries refused to comment. However, as a small response can be considered a statement by the Deputy press Secretary of the White house of Sarah Matthews. According to her, trump is a world — class negotiator, consistently promotes the interests of the United States in the international arena.

“Trump has demonstrated its ability to promote the strategic interests of America during negotiations on the first phase of a trade agreement with China, the achievements of the USMCA (Mexico and Canada) and the agreement with NATO allies,” stressed Matthews.

However, CNN sources still characterize the trump conversations with foreign leaders as “dangerous filth” that could harm U.S. national security. As emphasized by television commentators, if Congress read the transcript of these negotiations, even many senior Republicans turn away from the President.

In General, ambiguous manner of communication of the President of the United States with their counterparts — the information is not new. And the fact that Erdogan allegedly uses trump for their own purposes, wrote in his memoirs, former Advisor to the American leader for homeland security John Bolton. In his opinion, foreign policy trump could become the basis for the impeachment of the President.

However, at the official level these accusations again not be confirmed, and CNN sources prefer to remain anonymous, speaking with such statements.

How to make a feed mechanism for the drill press

CoinGecko Reserch analyst predicted a rollback of bitcoin below $9000

The number of cases COVID-19 in Israel, has exceeded 36 thousand