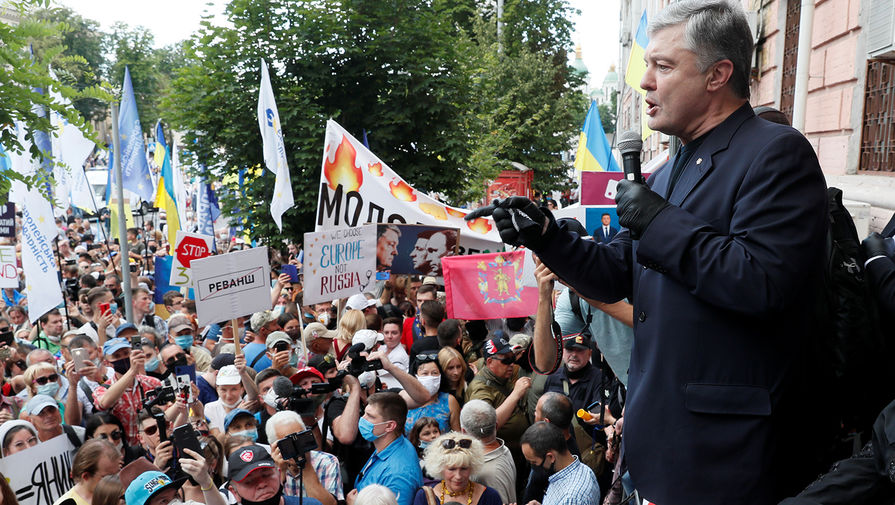 The meeting, at the measure of Petro Poroshenko in the case of abuse of power in appointing the Deputy head of the foreign intelligence Service moved again. And if July 8, the court will satisfy the requirements of the accusations, ex-President within two days will be released under the personal obligation. Against Poroshenko’s open 24 business, but none of them is not be serious threats. One of the reasons why the investigations against the President boxouts, could be the support of ex-President from the West.

On 1 July the Pechersky court of Kiev for the second time postponed the election of a measure of restraint ex-to the President of Petro Poroshenko in the case of abuse of power in appointing the Deputy head of the foreign intelligence Service Sergei Semochko. At yesterday’s session, the Prosecutor demanded to release Poroshenko on personal recognizance during the investigation — until July 10. The meeting of election of a measure postponed to 8 July.

In Ukraine wonder whether it comes at least one case against Petro Poroshenko before the real punishment. However, such actions on the part of both the prosecution and the court are forced to think that what is happening is only manipulation from the authorities to demonstrate activity in this direction. One of the slogans of election campaign of Vladimir Zelensky was the promise that the representatives of the previous government will be held accountable for corruption — “Spring will come — will be planted”.

Work in this direction, however, is almost non-existent, not counting the 24 open cases against Poroshenko, which have so far failed. Although the case of the illegal appointment of Sergei Semochko does not imply a real term of imprisonment or other tough measures, the transfer of the hearings on July 8 and the prosecution’s request to let Poroshenko on personal recognizance (just two days with the new date of meeting) also demonstrate that to expect loud process not necessary.

It is also noteworthy that the Prosecutor General’s office went straight for the case of the appointment of Semochko that does not involve harsh punishment, while against Poroshenko there is at least one case that can lead to much more severe consequences for the former President.

We are talking about sending Ukrainian sailors in the Strait of Kerch on 25 November 2018. Then they were captured by Russian border guards, which was used by Poroshenko, entering the military situation, which in turn could postpone the presidential election.

In this incident a criminal case under three articles — of treason, attempt of illegal seizure of power and the abuse of power. The initiator of the case was the lawyer Andriy Portnov, author of several cases against the former President. In mid-may, the Kiev research Institute of judicial examinations was transferred to the state Bureau of investigation the results of the examination, which reported that the Ukrainian government and military leadership, knowing the consequences, sent the sailors actually in Russian captivity, following an oral order of Poroshenko.

A potential danger to the President and the publication of his conversations with the former Vice President of USA Joe Biden. Recordings are studied in the framework of criminal proceedings opened on articles of treason and abuse of office.

The film released in may by the extra fractional Deputy of the Verkhovna Rada Andriy Derkach, according to him, records show about international corruption and treason on the part of Poroshenko.

According to the MP, the recordings were made in the period from 2015 to 2016. Of greatest interest is the purported dialogue between Biden and Poroshenko dismissal of then Prosecutor General of Ukraine Viktor Shokin in exchange for the allocation of Kiev $1 billion in financial assistance, as well as discussion on the resignation of former-Prime Minister Arseniy Yatsenyuk at the request of the American side. In addition, Derkach said that the fifth President of Ukraine have raised tariffs by 100% in order to receive $1 billion of state guarantees from the United States.

However, in this case the news has not yet been reported.

Meanwhile, on 30 June the head of the office of the President of Ukraine Andrey Ermak in an interview with The Washington Post stated that the government intends to develop a bill that would prohibit the publication of secret recordings of conversations of officials. Material, in particular, was devoted to the promulgation of the conversation Poroshenko and Biden.

As explained Ermak, such incidents office of the President sees as a direct violation of national security of Ukraine.

How the West defended Poroshenko

Anyway, but landing and punishing members of the former government became the criterion for evaluating the work of the government of Vladimir Zelensky. Kiev it is important to demonstrate the result in this direction, however, in all probability, there are factors that hinder the process.

One version of an ambiguous action on the part of law enforcement agencies in relation to the ex-President began the assumption that he stood up the Western partners of Kiev.

Thus, the concern with the cases against Poroshenko Express in Germany. The expert on foreign policy of the parliamentary faction of the Social democratic party (SPD), which is part of the ruling faction with the CDU/CSU, Nils Schmid said the political motives of the persecution of the former President of Ukraine.

“The Ukrainian authorities must understand that even attempts to deal with political rivals by means of politically motivated criminal prosecution in serious damage to the reputation of the country and undermine confidence in the legal state”, — quotes its words of Deutsche Welle.

He and the Deputy of the ruling Christian democratic Union, Rapporteur on Ukraine in the Bundestag, Frank Steffel draw Parallels with the case of former Prime Minister Yulia Tymoshenko, the criminal investigation which began after the victory in the presidential election in 2010 of Viktor Yanukovych.

“The impression that swells up every detail, if only to make him [Poroshenko] a case. This implies the assumption that this may be a politically motivated prosecution,” — said Steffen, adding that the contents of the cases against the former President causing him surprise.

In the parliamentary faction of the Free democratic party (FDP), also urged Kiev to ensure an impartial investigation.

“This means, in particular, that investigations must be conducted regardless of party affiliation. It should, as a minimum, to ensure compliance with the legal States — this is a responsibility of the Federal government of Germany and the European Union”, — explained the foreign policy expert of the FDP faction Bijan Djir-Sarai (Bijan Djir-Sarai) in the comments for DW.

What is going on with the ex-President is like the persecution of Yulia Tymoshenko, said earlier the former Prosecutor General of Ukraine Ruslan Ryaboshapka, whose reform of the Prosecutor General praised the West. In early March he was dismissed on the eve of the Ukrainian media reported that the attorney General did not sign the nomination of a suspicion the former President because of their poor quality. He Ryaboshapka not confirmed this information. However, that the failure to sign suspicion Poroshenko became a reason for discontent of the party “servant of the people”, told reporters the head of the Pro-presidential faction in the Verkhovna Rada David Arakhamiya.

The remand Petro Poroshenko was scheduled for another court hearing June 18. Then the Prosecutor’s office demanded to conclude the former President into custody. However, at the hearing, the prosecution said a more lenient measure is the personal obligation with the prohibition to travel abroad, and the judge postponed the hearing on 1 July.

It is noteworthy that on the same day before the meeting, the U.S. Embassy in Ukraine has published in social networks a statement about the inadmissibility of political accounts with the justice system.

“In a democracy, all citizens have the equal right to be treated fairly in accordance with the law. The justice system should not be used for settling political accounts”, — stated in the message of the U.S. Embassy.