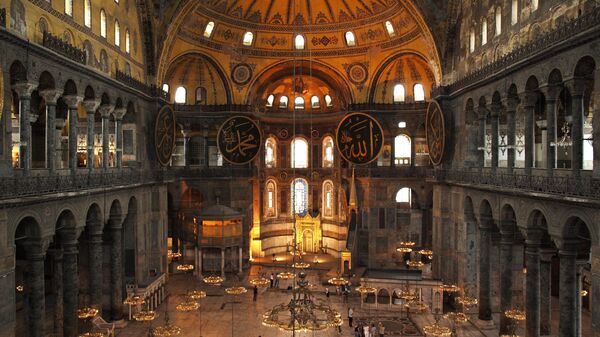 Hagia Sophia in Istanbul is an integral part of Orthodox history and culture, and there is hope for statesmanship of a Turkish leader Tayyip Erdogan as the transformation of the Cathedral-Museum into a mosque threatens consequences, said on Thursday, RIA Novosti Deputy head of the Department for external Church relations (DECR) of the Moscow Patriarchate Archpriest Nikolai Balashov.

The Supreme administrative court of Turkey, the state Council on Thursday considered the question of changing the status of Hagia Sophia into a mosque. The state Council believes that to change the status of the Cathedral is the presidential decree, reported by the Greek TV ERT. The decision will be announced within 15 days.

“The decision of the state Council of Turkey officially promise to publish only with time, for two weeks, though I took it as misleading, amazingly fast, apparently carefully prepared. However, if you believe the media, the decision is not final. They say, let the President decide – as in 1934 he decided Ataturk to transform the temple (then mosque) to the Museum. Evasively, and wisely left the direct responsibility,” said Archpriest Nikolai Balashov.

He noted that “the answer really is that” because “every “failure” the way the world balances in multi-year inter-religious, inter-civilization relations is fraught with serious and unpredictable consequences.”

“In this case we are talking about the monument a unique, truly global values, and it’s not just a cultural and historical object, but also a sacred place for millions. Still, after the “Great Church of Christ”, as for centuries it was called Hagia Sophia, which for millennia was the main Cathedral of Eastern Christianity, a symbol not only of the Byzantine Empire, but Orthodoxy as a whole”, – said the priest.

The Deputy head of the DECR also drew attention that “if the exact information of journalists, the court did not recognize relevant repeatedly repeating in these days of the approval of the Turkish partisan experts that if the Ordinance 1934 invalid and the rooms and the signature of Ataturk allegedly fake”. “No, the act of 1934 seems to be recognized. But he was one of deliberate and precise steps of the founder of the modern secular state of the Turkish Republic. Whether to wipe out this legacy?” – said Balashov.

He noted that Sophia Church is priceless mosaics from the Byzantine masters, the little that is left of “the amazing splendor of a Grand Christian Empire.” According to Balashov, the spiritual heirs of the Empire the peoples of Russia, which was once “captured this ethereal beauty” and accepted Christianity after visited the Hagia Sophia, the ambassadors of Prince Vladimir, the future Baptist of Russia, reported to his master: “do Not know, in the sky we were or on earth.”

“And what about these wondrous faces of Christ and the virgin? Because Muslims can not pray where there is a human image. Re-plastering with lime? I say, already made, already bought and carpets. And that will tell the visitors from all over the world who stand in front of these images? What do you say UNESCO, czeslawa this monument in the world heritage list? They will answer that it is an internal affair of Turkey? Why should pragmatic for Turkey to act against its own interests?” – said the Agency interlocutor.

According to him, now “there is hope for statesmanship” of President Tayyip Erdogan. “And pray, so help him God to make the right decision not to harm himself, the Turkish nation and all humanity. Sofia is a truly precious heritage of the world, and certainly is an integral part of our history and culture”, – said Balashov.

Turkish leader Tayyip Erdogan said earlier that the Turkish Council of State will consider the possibility of changing the status of a Cathedral (now it has the status of a Museum). According to the foreign Minister of Turkey Mevlut Cavusoglu said that his country was entitled to change the status of the Cathedral, turning it into a mosque, without taking into account the views of other States.

Hagia Sophia in Constantinople more than a thousand years was the largest Church in the Christian world. After the capture of Constantinople by the Ottomans and the fall of the Byzantine Empire, the Cathedral was converted into a mosque but since 1934 the building by decree of the founder of the modern Turkish state Kemal Ataturk became a Museum and was included in the world heritage list of UNESCO.