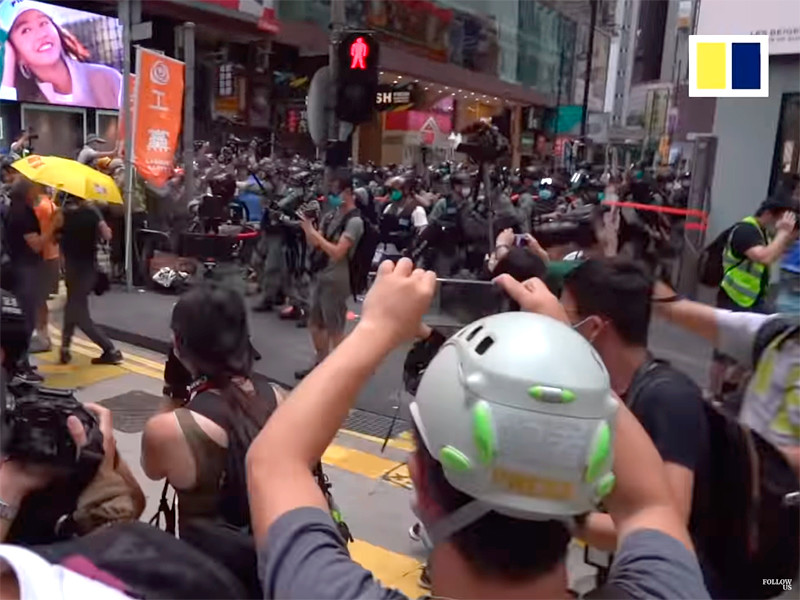 The Hong Kong police on Wednesday arrested more than 300 members of anti-government actions, reports TASS with reference to the press service of law enforcement.

“According to 20:00 (15:00 GMT. – Approx. TASS) the police detained more than 300 people. Among them, five men and four women suspected of violation of the new law on national security in Hong Kong”, – says the publication. According to Hong Kong’s Free Press, 22:00 the detainees were already more than 370.

Thousands of demonstrators gathered on Wednesday in Causeway Bay and Wanchai to protest against the adoption by the Parliament of China of the law violates, in their view, the Autonomous status of Hong Kong. They tore and set fire to debris on the roadway, tried to block the traffic, looked into the pavement.

The police used to disperse protesters with tear gas, rubber bullets and water cannons. In the clashes that wounded one policeman.

Protests held on the day of the 23rd anniversary of the transition of Hong Kong to Chinese sovereignty, the next day after adoption by the Parliament of the PRC law on national security in this special administrative region of the country. As they say in Beijing, this legal act is aimed at preventing acts of separatism, terrorism, and undermine state power and collusion with foreign forces. It provides for the maximum penalties for these offences are life imprisonment. It is, for example, threatens the activities in the interests of other States or publication outlining “Antipinsky” point of view.

In addition, under the new law in Hong Kong will be created by the security authorities of the PRC.

The new law has frightened many. The Museum, which is dedicated to the suppression of student protests in Tiananmen square in Beijing in 1989, in a hurry to digitize its archives for fear that they may be withdrawn. And the journalists asked the news site to remove more than 100 articles, fearing that old publication can be used against them.

“We can say that this law is just aimed against the protesters and politicians with an anti-Chinese views,” but it also can be used against anyone, says Professor of the University of education Hong Kong Isabel Ng, who founded a charity that helps refugees.

Many Hong Kong people are thinking about emigrating, writes The New York Times. The UK authorities promised to help the citizens of its former colony. The head of the British foreign Minister Dominic Raab said Wednesday that some residents of Hong Kong will be allowed to reside in the UK for five years instead of six months as it was before, and then apply for citizenship.

Hong Kong was promised a high degree of autonomy when it returned to Chinese control in 1997. Some time Hong Kong was a refuge for Chinese dissidents, as well as a place where freely developed science and journalism. Gradually, however, the control of China increased. A landmark event was the kidnapping by the Chinese authorities in 2015, five booksellers in Hong Kong.

Recall, last year mass protests in Hong Kong erupted after the government proposed to amend the existing “Law on suspected criminals who are in hiding”. The proposed mechanism of extradition would extradite the suspects in the decree of the head of the district administration jurisdictions with which Hong Kong does not have an agreement, including mainland China. However, opponents of the bill believed that it would undermine the independence of the judiciary of Hong Kong in accordance with the principle of “one country, two systems” and allow the Central government in Beijing to deal with the opposition parties. After several months of confrontation on the streets, the authorities had to give in and autoswitchable.