The European space Agency released a video dedicated to the Queen crater on Mars. The video was created based on frames previously obtained using orbital research station “Mars Express” 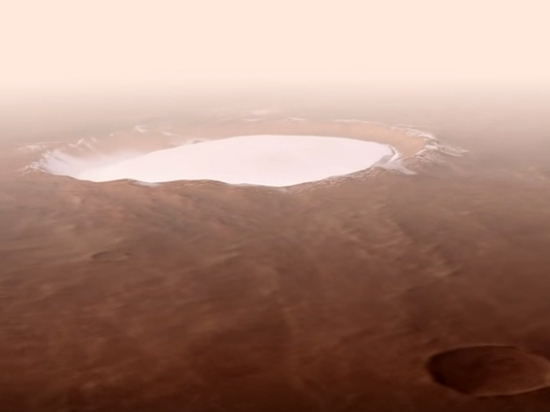 “Mars Express” was launched on 2 June 2003 and 25 December came to orbit the red planet. For 15 years, with the help of the probe has been a lot of discoveries — in particular, it is possible to detect water ice in the South polar cap at the end of the Martian summer, and also found in the atmosphere of Mars methane, which could indicate the presence of life on the planet.

Crater Queen is a recess with a diameter of about 82 kilometers, located in the lowlands near the North pole of the red planet. It received its name in honor of General designer of rocket-space industry of the USSR Sergei Korolev, under whose leadership the leadership was launched the first artificial Earth satellite and the first cosmonaut of the planet Yuri Gagarin.

The crater is not filled with snow, as could seem at first glance, but with ice, the thickness of which throughout the year hardly changes and is approximately 1.8 km long. According to experts, not to melt the ice helps the phenomenon, which the press release referred to as the “cold trap” the air directly above the crater cools, and because cool gas is denser than the relatively warmer, “settles” on the surface and covers the ice, not allowing him to melt.