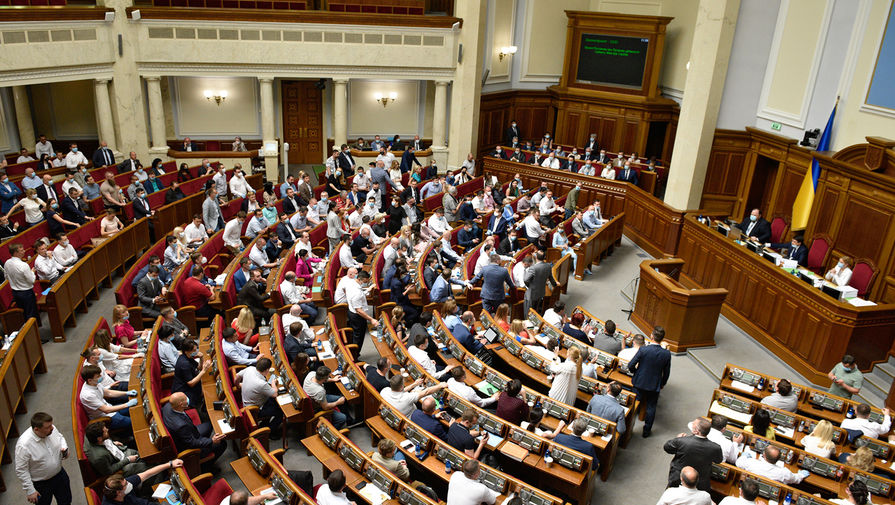 In Ukraine actively discussed the possible dissolution of the Verkhovna Rada from-for internal problems in the party of Vladimir Zelensky “servant of the people”. MPs oppose the President, making it difficult to promote the necessary Kiev initiative through Parliament. While an early election will likely result in the loss of monopolista “public Servants” that do not play in favor of Zelensky. However, experts do not exclude that in extreme cases the President can “sacrifice Parliament.”

In Ukraine is gaining momentum, the topic of early parliamentary elections, because in the near future it will be possible dissolution of the current Parliament. Discussed several possible scenarios — first, voting together with the local elections at the end of October or it is possible to transfer for next spring because not too positive epidemiological situation.

Officially, the dissolution of Parliament until denied. In particular, the speaker of Parliament Dmitry Razumkov repeatedly said that this issue is not on the agenda. However, an indirect reason for such concerns do exist: the probability of such an outcome indicates partial resistance inside the presidential faction “servant of the people”.

The fact is that lately the MPs resist the orders of President Vladimir Zelensky. A striking example was the failed vote on the government’s program of Denis Smagala: despite the vast majority of “public Servants” and a personal request of the President, approve the project failed. In the end, the Cabinet of Ministers of Ukraine is in limbo, not having immunity, and may at any time be dismissed by decision of the Parliament.

However, on 21 July in a similar situation will be Parliament itself, as it will lose an annual immunity from dissolution.

The main reason for this can probably serve as a continuation of the resistance inside the “public Servants” — in the party there are several groups of deputies, loyal not to the President.

In particular, in fraction there is a network of so-called “sorozat” — hard Pro-Western group associated with billionaire George Soros and the American Democratic party. As well as supporters of the Ukrainian oligarch Igor Kolomoisky and loyal to the former head of the Office of the President Andrei Bogdan and Kiev developer André Varisu members.

Speaking with one voice, they can disrupt the vote inside the party, not voting against, but only by abstaining — that demonstrated the situation with the government of Smugala.

According to “Strenia” citing a source in the faction Zelensky, the President’s Office has already received signals about a possible dissolution of Parliament, but MPs and perceive them as intimidation and blackmail.

“They say, vote in a disciplined manner, otherwise we will dismiss you. But before the dissolution, I think, will not come. In the new Parliament “servant of the people” will get in the best case, 150-160 deputies. But in reality — and less. Lose the majority, you need to be someone in the coalition to join,” — emphasizes the anonymous Deputy.

In General, the situation to dissolve with the aim of replacing members of the “public Servants” are really not the best. On the July survey by the sociological group “Rating”, it is supported by approximately 29.3% of Ukrainians. In addition, it is unlikely the new elections to the Parliament will help the most Zelensky: according to research by the Kiev international Institute of sociology, the actions of the President approve 38% of respondents have a negative attitude to the head of state, 45% of respondents.

We should not forget that for the dissolution of Parliament needs a good reason. Thus, according to the Constitution of Ukraine, the conditions is the lack of the coalition in Parliament within 30 days, the inability to form the Cabinet in two months or 30 days without a resumption of sittings during one session.

From the point of view of the Ukrainian media in the basic law there is a loophole that allows theoretically to carry out the dissolution on the grounds that monopolist “public Servants” is not a coalition. Such a provision would have to prove in court, but in General the scenario is quite real. However, the dissolution decree may meet resistance by the constitutional court, which is not fully controlled by the President’s Office.

If we consider more real perspective that can help an exit of deputies from “public Servants”.

Thus, the party will lose its absolute majority and will begin the search for partners for creation of the coalition. There will be a counter of 30 days and after this period, if the factions fail to find allies, the President can dissolve the Rada.

Currently, such a scenario — a dissolution of Parliament is said in a conversation with “Газетой.Ru” the head of the Ukrainian Institute of policy analysis and management (FAMP) Ruslan Bortnik.

“Just to dissolve Parliament at any time the President cannot. That is, there should be no coalition, there is no meeting or no government, at the same time everywhere from 30 to 60 days. Only in this case the head of state gets the right but not the obligation, to dissolve Parliament”, — the expert specifies.

From a legal point of view the preparation of such processes, the Parliament is working and not blocked, continued Bortnik, from mid-July, he will go on vacation and in September will return to work.

That is, the conditions for the dissolution of Parliament cannot be formed until October-November.

However, the current situation can be broadly considered as pressure on the members of “public Servants” from Office Zelensky as the crisis within the faction is one of the main reasons for the start of the discussion around the dissolution of Parliament.

According to Ruslan Bortnik, of the rumors on this subject comes directly from the Kiev authorities wishing thus to encourage deputies to vote in the interests of the state.

If we consider the dissolution of Parliament as a real perspective, it is not entirely clear why this can be necessary to the President. Despite internal resistance in the party, the risk of loss of monopolista more dangerous in the context of the General discontent of the Ukrainian authorities.

“Any new elections would only worsen the situation of the party in power, therefore the expediency of early parliamentary elections is extremely low. But we can not exclude the scenario in which the fall or winter can form a serious political crisis with mass protests. Then the President in order to maintain his position, can donate by Parliament, but before this crisis is far from over,” he said Bortnik.