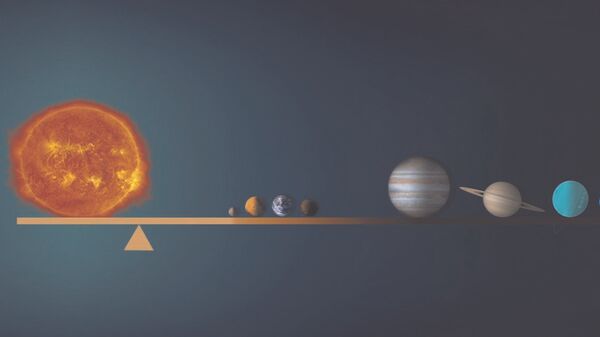 American astrophysicists have determined the exact location of the center of gravity of the Solar system, which tied all measurements of gravitational waves which scientists record the existence of black holes. The study is published in the Astrophysical journal.

American astronomers from the NANOGrav project looking for gravitational waves through the observation of regular bursts of radio waves from millisecond pulsars — rapidly rotating neutron stars. Data for the 15 years of observations have shown that pulsars are extremely stable in frequency of incoming pulses and can be considered not only as interstellar beacons, but as galactic hours. Any temporary variations in the pulses of pulsars, according to scientists, indicate the influence of gravitational waves to bend our Galaxy.

However, scientists have discovered that the current gravitational model of the Solar system are not suitable for data analysis NANOGrav, as regularly give conflicting results.

“It would seem that the more data, the more accurate the result should be. But we keep getting large systematic differences in our calculations,” — presented in a press release from Vanderbilt University leading words of the author Michel Vallisneri (Michele Vallisneri), astronomer from the jet propulsion Laboratory of NASA (JPL).

“The point is that the errors in the masses and orbits are converted to artifacts of the timing of pulsars, which may look like gravitational waves,” explains JPL astronomer and study co-author Joe Simon (Joe Simon).

Then the researchers decided to calculate the location of the barycenter — the center of gravity of the Solar system, where balanced by the mass of the Sun, all the planets, moons and asteroids.

It turned out that he is not in the center of the Sun, as you might expect, but closer to the stellar surface. This is due to the large mass of Jupiter and underestimation in the models of its orbit. The NANOGrav project collects data for 15 years, and Jupiter makes a complete revolution around the Sun in 12 years.

Making adjustments to the model, the researchers had the center of gravity of the Solar system up to 100 meters. According to the authors, is comparable to the thickness of a human hair on a football field.

Scientists hope that now they are much more accurate can capture gravitational waves from pulsars and will open up many new black holes, as well as make more correct idea of the shape of our Galaxy.

“Now we’re localized in space for observations of pulsars spread throughout the Galaxy, much better than before, says study leader Steven Taylor (Stephen Taylor), associate Professor of physics and astronomy Vanderbilt University and a former JPL astronomer. — Using pulsars, we are like the spider sitting in silence in the center of the web and catching the slightest of her movements. Knowing where the barycenter of the Solar system we will be able to feel even the slightest “tingle” in the network”.

The NANOGrav project is ongoing, and scientists are confident that soon new data will unambiguously detects unknown massive black holes.