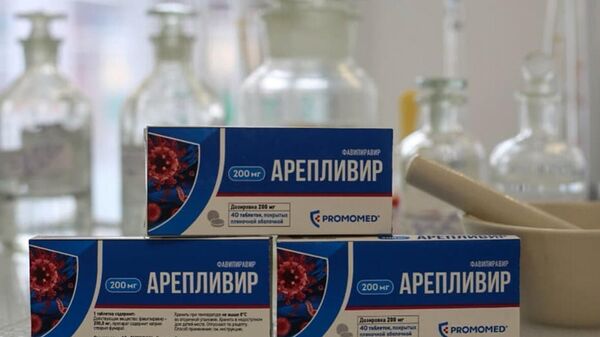 Vladislav Strekopytov. The Ministry of health has approved another drug from the coronavirus on the basis of favipiravir — “Replevin” Saransk factory “Biochemist”. First — “Aviewer” — approved in late may. But clinical trials started only in April. RIA Novosti found out, how the pharmaceutical companies have managed to meet such deadlines.

A new era in the treatment of coronavirus

Creation of medicines from COVID-19 can be compared only with the discovery of antibiotics, which saved humanity from bacterial infections. And Russia was one of the first to develop a drug against the new threat of the disease.

Clinical studies have shown that its efficiency is 90 percent, that is nine out of ten people with timely treatment will not die.

In search of the cure

The creation of drugs usually takes years. So while some scientists quickly took up the development of vaccines against coronavirus, others decided to try existing drugs.

In particular, tested the antiviral, immunomodulatory and respiratory tools. Special hopes are pinned on the American “Ramdevpir” used against Ebola and has proven to be effective in control of pathogens of SARS and MERS, as well as Japanese drug for the treatment of influenza favipiravir.

Both drugs are broad-spectrum activity against RNA viruses, which include SARS-CoV-2. They inhibit the RNA-dependent RNA polymerase — enzyme necessary for replication of the pathogen in the cells. Other products only prevent the penetration of the virus into cells.

“Ramdevpir” successfully passed clinical trials in the United States and Germany, and on may 1 the FDA food and drug administration (FDA) issued under a simplified procedure — two days after the end of the testing approval for “emergency use” of “Ramdevpir” for the treatment COVID-19.

Russian scientists and representatives of pharmaceutical companies had based Japanese drug, rapidly conducted clinical trials and established production of drugs based on favipiravir.

From favipiravir — to “Replevin”

The company Toyama Chemical, part of Fujifilm Holdings Corporation, has developed favipiravir as a cure for influenza in 2002. However, animal experiments have shown that it can not be used during pregnancy because of possible negative influence on the DNA of the child and risk of damage to the fetus, therefore, with the approval of any difficulties.

In 2014, favipiravir still registered under the trade name “Avigan”. It was allowed to apply only for new influenza strains resistant to other antiviral drugs — that is, as a last resort. In six years, this situation has not arisen even once, and the medicine could forget, if not for the coronavirus.

In February 2020 in China, where favipiravir manufactured by Zhejiang Hisun Pharmaceutical as a remedy for flu called “Failover”, the drug tried to treat COVID-19. In March, the Chinese example was followed by Japan and Italy.

In April — may in Russia, in clinical trials different variants of the drug began three pharmaceutical companies “Chemrar”, “Promomed” and “Technology of drugs”, member of the group “R-Pharm”. The first approval of the Ministry of health received a “Aviewer”, established in Chemrar supported by the Russian direct investment Fund (RDIF). And now — “Replevin”, produced by LLC “Promomed” factory “Biochemist” in Saransk.

“The complexity of the novel coronavirus infection that was not medicine that acts etiologically, that is, remove the cause, says RIA Novosti, Peter White, Chairman of the Board of Directors of “Promomed”. We took molecule, created in Japan for the treatment of another disease, and one of the first undertook a full-scale clinical studies. Russia was ahead of many countries”.

JSC “Biochemist” is one of the largest manufacturers of pharmaceuticals. Full-cycle plant produces all kinds of medicines.

“We have a huge biotechnological platform — employees, devices, technologies, scientists and clinicians who work with us. This allowed us to move pretty quickly, explains White. — We have attracted biologists. People worked seven days a week. Had to re-count and dosage and courses to determine which purity needs to be substance. In the end, all technological solutions of our own.”

70 percent of patients treated with this antiviral drug, the fracture occurred within the first days of the disease, and four days later, the virus has disappeared from the body. On the tenth day PCR test with one hundred percent of the subjects were negative. In the control group receiving standard treatment during this period recovered 70 percent.

“Replevin” gave very good results, — says member of Russian Academy of Sciences Larisa Balykova, Director of the Medical Institute of the Mordovian state University named N. P. Ogarev, one of the centers where the study. Literally on the third day people have dropped the temperature rapidly regressed symptoms of intoxication, feel better. On the tenth day, the volume of lung lesions was reduced by 25-35 percent.”

With no side effects — except that the drug should not be taken by pregnant.

The sooner you start treatment, the higher the efficiency and lower the risk of complications. “Blocking replication of the virus immediately gives tangible effect. Such a drug before the doctors were not,” notes White.

The secret of efficiency

The fact that in such a short time has developed and started the production of innovative drugs, which efficacy is confirmed in clinical trials, the situation, according to experts, is absolutely unique.

“We found a cure for a new disease for a month and a half. Early in this impossible to believe — says the Director of clinical research, RAS academician Dmitry Pushkar. But this merit is not only of biologists, quickly absorb the drug. Uniting the efforts of systematic biologists and clinicians, researchers and manufacturers is made possible due to the legislative initiatives of the government.”

We are talking about accepted April 3, resolution No. 441.

“In accordance with this document, clinical research, pharmaceutical expertise and expert assessment conducting a large-scale, but permission for clinical trials are made not months, as before, and in a few days. Quickly assess the results of those studies, says Peter White. And this concerns not only favipiravir. Our colleagues also quickly produced monoclonal antibodies that block interleukins, not allowing them to develop cytokine storm in patients with coronavirus infection. The government has provided an unprecedented opportunity for pharmaceutical industry to provide health care with innovative products saving a person’s life”.

“For us, the law is of great importance, continues academician Pushkar. After 441, the resolution all as if startled, and the substance instantly found. If not for the initiative of the government, no one would be on favipiravir did not remember and did not know. When people understand that their legislation will not restrict, we are sure to be breakthrough drugs and technologies”.

When will the drug

Clinical trials of “Kalivia” fully completed, processing of results and preparation for their transfer to the Ministry of health. If the Agency will promptly review them and perekvalificirovat temporary registration certificate to a permanent, the drug will appear in hospitals already in early July, and by the autumn all will provide a cure that saves lives.

“Whatever the second wave of the disease, which are forecast in the fall, we have a “security umbrella”, emphasizes Peter White.

Antivirals, interleukins blockers and antibiotics are the three components of complex therapy of COVID-19. First block the replication of the virus, its reproduction, and without it he lives in the body a matter of hours. The second prevents the development of excessive autoimmune reaction that causes uncontrolled inflammation. Still others are struggling with the accession of bacterial pathogens. And now all these drugs are produced in Russia.