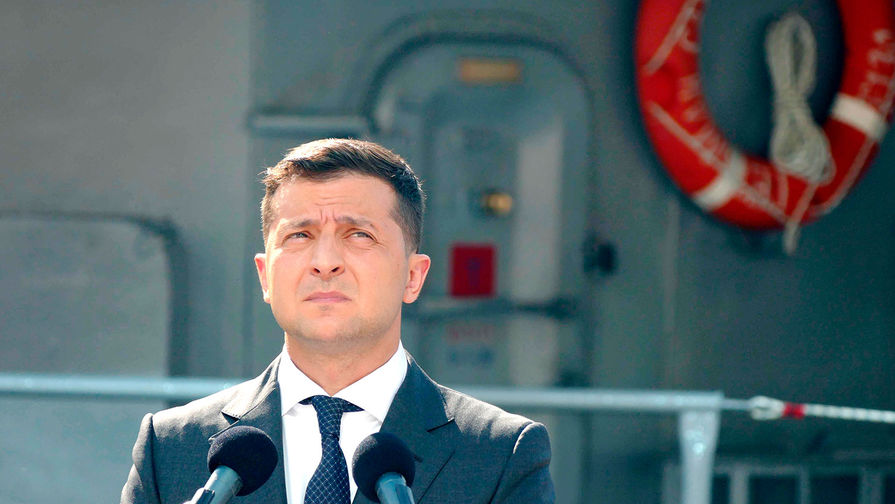 The Ukrainian leader Vladimir Zelensky said that neither he nor the people of the country “will not forgive” the fact that Crimea was taken away from Ukraine. In addition, according to him, there is forgiveness and those who are allowed to do it. The Crimean Peninsula became a Russian unit after the fact wanted by the people of the region. The opinion they expressed in the referendum, which was held in 2014.

The population of Ukraine will never forgive those who took the Crimean Peninsula, the Ukrainian sure President Vladimir Zelensky.

“We’ll never forgive those who prevented Ukrainian sailors to prevent it”, — he added during the celebration of day of the Navy. Stream his speech took place on the page of the office of the President in Facebook.

However, he did not mention specific names. In his celebratory speech Zelensky also promised to provide material support to the sailors of the Navy of Ukraine. According to him, they are the “sample power, modernity and the real pride of Ukraine”. The country itself is, in his opinion, a Maritime power, and not in the past and in the present and near future.

Earlier, former chief of staff armed forces of Ukraine Yuri Ilyin said that the Euromaidan supporters were going to quell the discontent in Crimea in 2014, through tough measures.

According to him, the policy had not considered the possibility of a peaceful settlement of the situation. Vitali Klitschko has promised that the Peninsula “will go even harder than with Ukraine”, RIA “Novosti”.

Such position of the authorities was confirmed by Colonel General Mykhailo Koval, who was acting Minister of defense of Ukraine. He told me that in 2014, the Crimea could “drown in blood” if APU started there to shoot.

Six years ago in Ukraine there was a coup. Local Crimean officials held among the population of the Peninsula the referendum, which decided their fate: to stay with Ukraine or become part of Russia. The vote was attended by the majority of Crimeans who were eligible to vote. Almost all of them called for the reunification of the Crimea with Russia. In March 2014, the region came under Russian jurisdiction.

But the Ukrainian authorities still consider it their territory, but “temporarily occupied”. In any action Russia on the Peninsula, they send the Russian side a note of protest, because they believe that everything should be agreed with Kiev.

In addition, officials expressed the opinion that Russia is obliged to continue to pay “for the lease of the Crimea” black sea fleet. Earlier, Deputy Minister of foreign Affairs of Ukraine Vasily Bodnar in an interview with “UKRINFORM”, said that Moscow is obliged to pay the country $100 million a year for stationing the black sea fleet in the Crimea, as it was before the occurrence of the Peninsula in structure of Russia.

According to him, Moscow allegedly violated “international law by resorting to the attempted occupation of Ukrainian territory”, and also failed to comply with “legal procedures” when unilaterally left the agreement with Ukraine.

When answering the question whether the Russian side to pay money to Ukraine for the basing of the fleet, Cooper said, “Yes, about $100 million a year. However, in 2014 no payment is happening.”

The Russian status of Crimea does not recognize other States. So, a number of European countries and the United States immediately after accession of the Peninsula to Russia imposed economic restrictions, in particular against the region. In addition, does not confirm the status of the Crimea and Turkey. Earlier, the head of foreign Affairs Mevlut Cavusoglu once again reminded that his government will never recognize the Peninsula as part of Russia.

“We support Ukraine’s territorial integrity and its sovereignty, and always very clearly confirm that we do not recognize and do not recognize the illegal annexation of the Crimea”, — he said at a press conference held jointly with foreign Minister of Ukraine Dmitry Coleby.

Cavusoglu stressed that this “fundamental position”of Turkey, which “will never change”.

In the Crimea noted that it does not matter the recognition of other States, as long as Russia recognized and supported the region. “We are not surprised by this statement of the Minister of foreign Affairs of Turkey. We recognized them is not required and not particularly care,” — said in comments to RIA “Novosti” the Senator from the Crimean region, a member of the Federation Council Committee on international Affairs Sergei Tsekov.