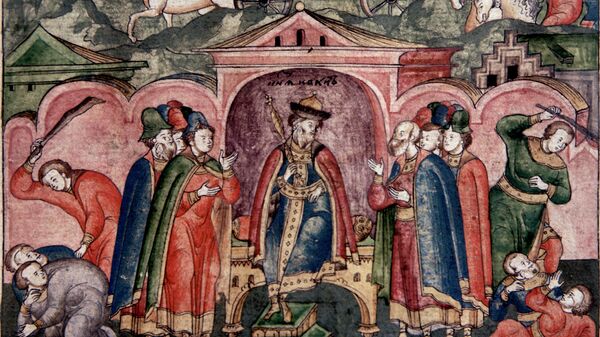 The formation of a unified Russian state, which began in the XIV century, could go in a completely different scenario: regularly plague raged then almost decapitated by the Moscow princely house, Qualitica. How the epidemic influenced the rise of Moscow, together with the correspondent of RIA Novosti versed associate Professor of Moscow city pedagogical University, head of the mA program “History of Russia” Alla chelnokova.

In XIII-XV centuries the epidemic killed one-third to half of the population, were in Russia commonplace. So, after the outbreak 1278 Pskov annals record more in average once in 15 years, Novgorod – once at 17. As told Alla chelnokova, the bulk of the information about the events of those years have preserved for us in Tver, Moscow, Novgorod and Pskov Chronicles.

According to the expert, the mortality rate of the plague among the people was notable in the average two to three times less than among the common people. The main reason is the quality of food and lifestyle. However, the epidemic 1353 almost beheaded the Grand Duchy of Moscow, killing sons and grandsons of the famous Ivan Kalita.

As reported in the Rogozhsky chronicle (PSRL, vol XV. PG., 1922 – approx. ed.), March 11 died the Metropolitan Feognost, who played an important role in the Moscow policy. In the same week both died the son of the Grand Prince Simeon Ivanovich the Proud. Soon, April 26, from infection died and the Governor himself. Within forty days from the death of Simeon, died and the youngest of the sons of Kalita – Andrew. On the throne sat the middle brother Ivan, surnamed the Red (that is “beautiful” – approx. ed.).

Ivan’s contemporaries remember the meek and the merciful, which, according to experts, was unusual for the Moscow princes. He ruled briefly, and died in 1359 at the age of just 33 years. Its part of the Moscow land he bequeathed to sons, Dmitry and Ivan.

Muscovy is actually broken up into three parts, and after the death of Kalita: two-thirds of the land divided the sons of Ivan the red, and their cousin Vladimir Andreevich, born in the midst of the epidemic 1353, after the death of his father, kept him for his parish.

It seemed that the early death of Ivan the red will stop the rise of Moscow, as the eldest heir – the future of Dmitry Donskoy – was only eight years old, and participate in the princely fight and intrigues, he could not, said chelnokova.

When the princes gathered in the Horde, awaiting a shortcut to the throne, formally located in Vladimir, ruler of Moscow, according to the historian Sergei Solov’ev in his “History of Russia from ancient times”, are simply not appeared, as yet was not considered a man and could not claim on the government. Khan gave a great reign uncle second cousin of Dmitry Ivanovich, Prince of Suzdal.

The Prince of Suzdal received the great reign of Vladimir “is not paternal, and not on Dedinje”, emphasizes resurrection chronicle (PSRL, vol. VIII. SPb., 1859 – approx. ed.), that is, without any hereditary rights. And got Khan the shortcut is not the eldest of the Suzdal princes, and the average — Dimitri Konstantinovich, who ruled in Nizhny Novgorod.

However, Moscow’s not going to give up power without a struggle, said the expert. The nobles, accustomed to the status of the strongest principalities, did not want to part with the advantages of administrative and tax management of the Russian lands.

The Horde in 1359 with the death of Berdibek Khan began a twenty-year period of turmoil, during which replaced about twenty khans. The Chronicles call this period “the great zamyatney”. Some of Moscow’s embassies in the Barn (the capital of the Horde – approx. ed.), which was itself young, Dmitri, did not bring success.

The main advocate of the Moscow leadership, according to Chelnokova, at this time was Metropolitan of Kiev and all Russia Alexy, in fact, ruled the Principality during the childhood of Dmitry. Even with 1328 the residence of the chief Hierarch of the Church of Russia located in Moscow. St. Alexius had influence not only on the princes, but also the Horde. In 1357, he, according to legend, he healed a relative of the Khan Taidula from eye disease, for which he was awarded land in the Kremlin, which previously housed the Horde compound. At this point the Metropolitan was founded Chudov monastery.

In 1362, the Metropolitan and boyars again went to the Horde, divided by the time in half. They finally managed to obtain a label from one of the khans, Murid. As noted by Sergei Solovyov “history of Russia from ancient times”, apparently for Dmitry of Moscow was busy also Rostov and Tver princes, who thought that much more profitable to have Vladimir on the throne a child than an adult.

Having returned from the Horde with a label, the nobles gathered his troops and spoke to Vladimir, and young princes, as pointed out by Soloviev, personally rode at the head of the campaign. Dmitry decided to give up without a fight, and thus the grandson of Ivan Kalita received a great reign.

However, after only a few months the enemy Murid, Abdullah also sent to Moscow a shortcut. Dmitry Ivanovich, according to the expert, received the Embassy with honour, without abandoning the label that riled the Murid. Khan sent a new shortcut Suzdal Prince, and he willingly took it, again having moved to Vladimir.

The second time Dmitry stayed on the throne only twelve days, because the Muscovites came a great army under the walls of the capital. They drove him out of Vladimir, and then besieged in Suzdal after complete submission.

In 1364 a terrible plague again devastated Russian land, killing many princes. Died ten years brother Demetrius Ivanovich and several princes of the most influential branches of the ruling family. Among the survivors, according to Chelnokova, sparked controversy over land left without direct heirs.

Nizhny Novgorod, a major trading centre took over the youngest of Suzdal Rurik, Boris Konstantinovich. Dimitri Konstantinovich, not being able himself to take his brother’s rich inheritance, he decided, as reported Rogozhsky chronicler, to ask for help in Moscow. Fourteen-year-old Dmitry Ivanovich tried to solve the problem diplomatically, but Prince Boris refused to compromise.

Then, Moscow has resorted to the authority of the Church: Metropolitan Alexy had taken from the lords of Suzdal cathedra of the Bishop of Nizhny Novgorod and Gorodets. Ambassador from the Prince of Moscow in Nizhny himself arrived St. Sergius of Radonezh, and when Boris Konstantinovich refused to go to Moscow for talks with his brother, he sealed everything in the city is the Church.

Then to the aid of Dmitry Konstantinovich was made by Moscow’s men, and Prince Boris was forced to obey. According to experts, this event marked the end of the crisis of the Moscow Principality.

When in 1365 from the Horde sent another label for Dmitry Konstantinovich, he turned him down and permanently abandoned in favor of Moscow all claims for Supreme power. In 1366 this Union was cemented by the marriage between Dmitri Ivanovich and the daughter of the Suzdal Prince. According to Chesnokova, Moscow’s policy allowed her relatively peacefully to assemble a powerful coalition of Russian princes.

The main competitor of Qualitica – Tver Principality – recognized the seniority of Moscow in 1375, when Dmitrii Ivanovich allies took Tver siege, forced to sign a favourable peace. And just five years later, in 1380, the Union of Russian principalities inflicted a Horde during the battle of Kulikovo first-ever large-scale defeat.