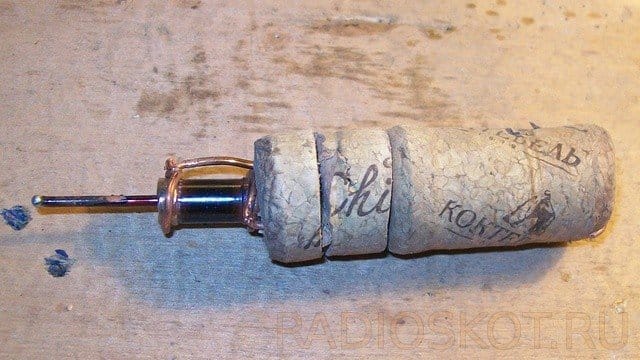 As you know, the basic tool of radio – is the soldering iron. A simple device which is a heater, most often nichrome spiral adjacent to the sting. When you turn on the soldering iron through the spiral is leaking some current which causes it to fairly high heat, respectively, is heated and the soldering tip. The tip temperature during soldering may be of 250-350°C and depends on the power of the soldering iron, this is enough for quick melting of solder and heating of the terminals of the electronic components. Now on sale you can find a huge number of soldering irons to suit every taste and color, the manufacturers try to provide them maximum different “buns” to make the soldering process better and more user friendly. For example, many primers contain a power regulator that allows you to adjust the temperature, which will heat up the sting. This function is sometimes necessary because sub cooled or overheated, the solder will lose its mechanical strength, in addition, there are different types of solder, designed for different melting point. Soldering irons and some even allow you to adjust not just heating power and the temperature at the tip of the sting, right up to degrees. Such precision is particularly necessary for soldering small smd components, which is important for temperature control. Of kinds of soldering iron tips there are also many – they differ in shape, have a different heat capacity, respectively, serve different purposes: thick desoldering a leg of the power transistor to – one soldering iron tip, and solder thin smd chip contact is completely different. Thus, modern soldering irons have gone far in terms of functionality from their Soviet predecessors and now are not simple nichrome heater with handle, which is connected to the network, and the whole electronic circuit. Imagine a paradox – broken circuitry in the soldering iron, it does not work anymore and to fix it, you need to replace a particular item. This can be done only with a second soldering iron, but do not go to the store to buy a second soldering iron to fix first? But you can always make a spare soldering iron itself literally from make-shifts. It can be useful not only when broke a basic soldering iron, but in all other situations, when an urgent need something to solder, and a soldering iron no.
Required for the manufacture of just a couple of components – a powerful wirewound resistor and a small piece of thick copper wire. The resistor is necessary to use wire, carbon and metal film will not work. The ideal option would be this domestic resistor, it is good that no harm can withstand high temperatures. According to the author, these resistors are quite suitable even for use as a temporary water boiler. The photo shows that the resistor has already passed the “test of strength” by heating to high temperatures, its sides formed the characteristic black spots. 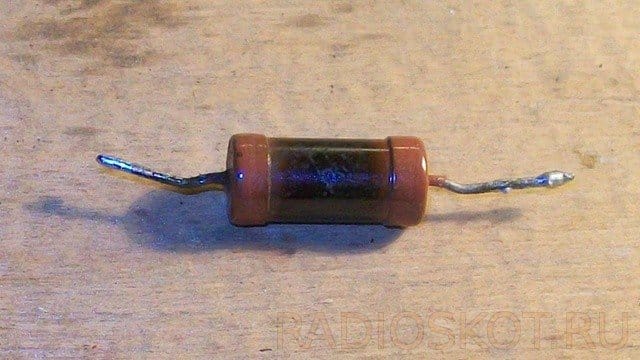 You can use a resistor of 5-10 Ohms, it would be the best resistance. The lower the resistance the more powerful soldering iron than higher, therefore less power. Learn more about power calculation will be discussed below in the article. Only thing worth mentioning is that excess power (more than 30W) can cause the resistor is simply hot and will burn out, and the lack (less than 10W) would not even melt the solder. Optimum power range is in the range of 10-30W. After selecting the appropriate resistor you need to prepare it. The first thing connected to the power source with a voltage about 10-12V and wait until the resistor is hot – it should burn the paint. In this case, perhaps, it will smoke and unpleasant smell, and because the procedure is best done under a fume hood or in a ventilated area. After resistor case removed a maximum of paint, you need the root to bite his conclusions – they are no longer needed. Instead, they need the edges around the diameter of the body of the resistor with needle files to machined grooves to reveal naked metallic luster as shown in the photo. This should be done in moderation, so as not to damage the conductive portion of the resistor, which is located within. The ends of the resistor need to whittle away until, until there will appear a hole in the center. After all these procedures, the resistor will become approximately as shown in the photo below. The first time to be perfect may not happen – but it does not matter, because you can get another resistor and try again. 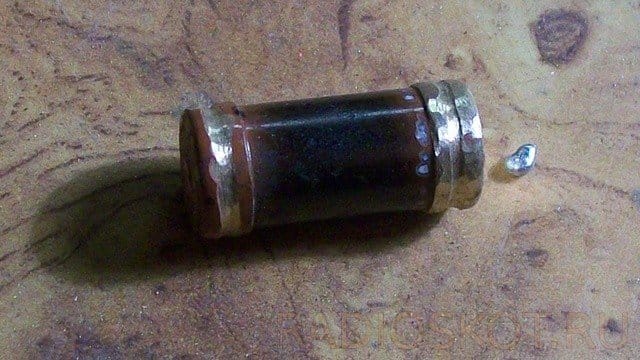 Special attention should be paid to the choice of soldering tip for the future self-made soldering iron. The best material for soldering tip will be copper, as it is easy to give necessary form and it has excellent heat. For a homemade stinger need to use a small piece of copper wire, a length of about 1-1,5 see the point to this piece of wire went into the hole inside the resistor and sticking out one side about an inch. To do a longer “flight” sting is not reasonable, as there will be large heat losses and shorter will be uncomfortable to use a soldering iron. The diameter of the copper wire is selected so that it fits inside of the resistor due to a dense insert and it will hold, in addition, no gaps will provide maximum heat transfer from the heating resistor to the sting. If necessary, tip can additionally be fixed in the resistor, slightly xplosiv or bending the wire at the edges of the resistor. The final design will look like the picture below. 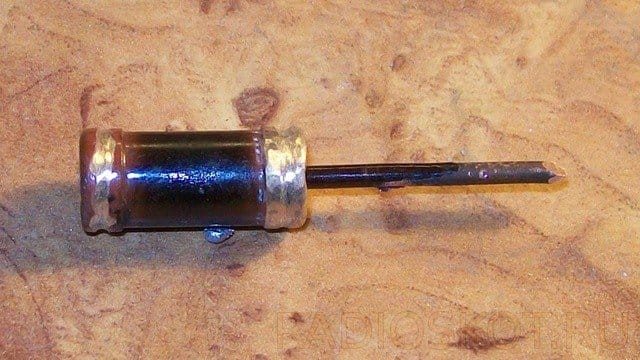 Now now we need to think about how to supply power to the resistor, it began to heat up. To use for this connection absolutely can not solder, because the solder just melted together with the heat of a soldering iron. In the preparation of the resistor at its edges was machined grooves – they just need to fix the wires, feed the supply voltage. To use the wire insulation also is not necessary, because the insulation will heat up and poplavyatsya. The ideal option is to use copper enameled wire, like sting, only more flexible and thin. Too thin to take also not be, because the current in the circuit will be a decent 2-5A. If necessary, can be isolated segments of wires with shrink – it withstands high temperatures. 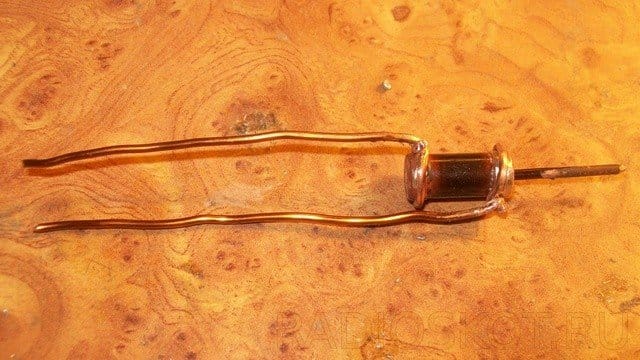 In fact, the soldering iron is ready. When power is applied to the lead wires of the resistor segments, and accordingly, the tip will begin to heat up. So, it’s time to think about the power of a soldering iron and voltage needed to power it. You need to remember Ohm’s law, which reads as follows: the current in the circuit is equal to voltage divided by resistance. Resistance, in this case, it used a resistor. For example, if the resistance will be 5 Ohms, it is supplied with a voltage of 10V, the circuit will flow current is 10/5=2A. Now it’s time to remember the formula of power calculation, she States that power is equal to current in the circuit multiplied by the voltage. As was calculated above, the current is 2A, voltage is 10V, respectively, the power will be 10*2=20W is the best option for self-made soldering iron. If necessary, you can count on the above formulas solder any resistor and any voltage while maintaining the optimal power to 20W.

At least a soldering iron and quite efficient, you cannot use it, because there is no body, and a hot heater soldering iron will not hold. A good option for housing may be high temperature silicone handles, either all the famous tube, made of cork wood. They are not heated in the process, as work as insulator. The resistor need to be fixed in the thickness of the tube, cutting it deeper. Then the output power wires. 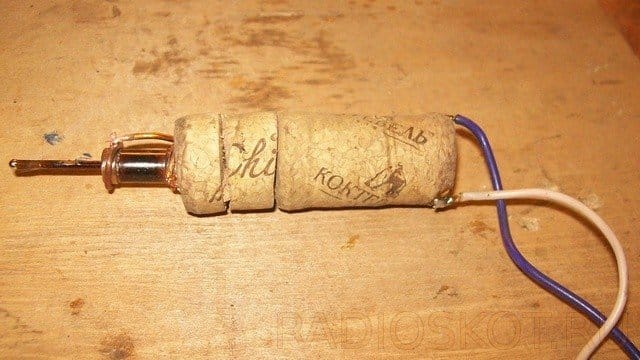 The case for such a soldering iron you can even do it from unnecessary probe of a multimeter, but this option is bad because the plastic can start to melt after prolonged use, especially at high power. But it is the most compact and will fit even in your pocket. A good build! 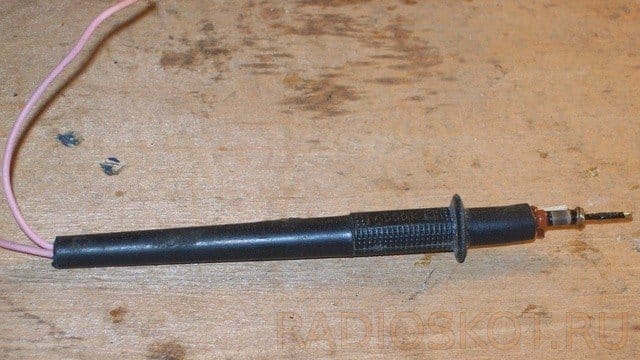 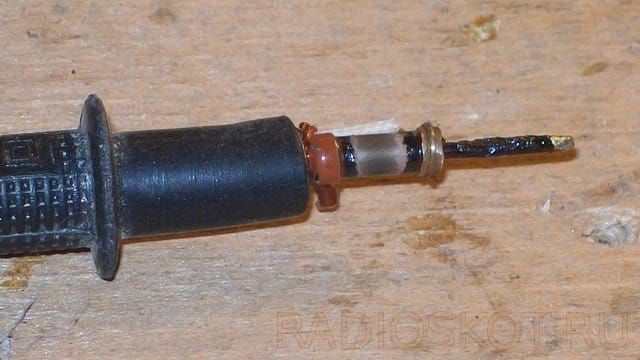