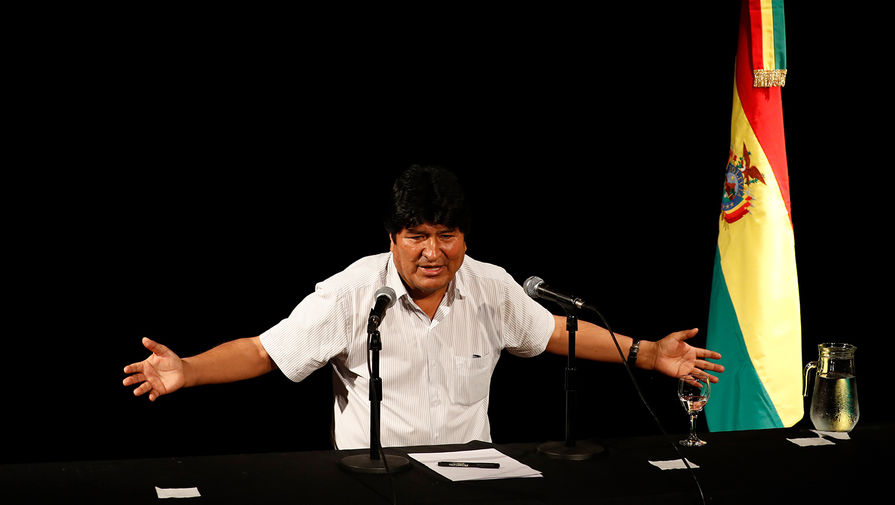 Bolivian prosecutors have formally charged with terrorism ex-President of the country Evo Morales. The Agency intends to secure the arrest of the former head of state. According to the prosecution, Morales during the civil unrest caused by his resignation, coordinated food blockade of several regions of the country. The politician considers the business political.

The Prosecutor’s office of Bolivia has charged the ex-President Evo Morales charged with terrorism and demanded to hold him.

The Ministry statement said that during the protests in November last year, the former President instructed one of his supporters to cease to provide food to several cities of Bolivia.

Morales himself denies all charges and considers them politically motivated.

“It is illegal and unconstitutional, the Prosecutor’s office of La Paz, planning to accuse me of terrorism on the basis of a false record that is further proof of the systematic political persecution of the government de facto. Democracy and the rule of law will soon return to Bolivia,” wrote Morales on Twitter.

Audiotapes, in question, was presented by the Minister of internal Affairs of Bolivia Arturo Morelli at the end of last year, in the midst of the protests. According to the prosecution, on the record, Evo Morales discussing with a supporter of the blockade of the largest cities in the country to exert pressure on the new government.

The protests of the military and peasants

20 Oct 2019 in Bolivia held presidential elections, in which in the first round by a large margin defeated Morales, who led the country for 13 years.

Until 2016 in Bolivia were banned politicians re-elected for a fourth term in a row. Then, the Morales government decided to amend the legislation to remove this restriction. In the referendum, however, the majority of citizens (51,3%) voted against. A year later, the constitutional court of Bolivia has canceled the results of the referendum, citing the American Convention on human rights, Evo Morales again took part in the presidential race.

Competition it was ex-President Carlos Mesa. After the election Commission has processed about 80% of the ballots, information on the progress of vote counting are no longer published. At that time, the results have indicated the need for a second round. Only the next day, the Commission resumed the publication of data, but the gap between the candidates has grown rapidly.

After that, the Organization of American States released a report in which it was reported that the elections were flawed, therefore their results can not be recognized.

All of a sudden after this statement, the Prosecutor’s office of Bolivia launched an investigation into the facts of falsification and manipulation of results. The country began the mass protests, on the side of the protesters started to join the military, then Morales resigned to, as he said, to avoid bloodshed. He soon left the country and received political asylum in Mexico, the interim President became the Vice-speaker of the Senate of Bolivia, Janine Agnes.

A week after that, the country again the protests began. November 15, Bolivian Coca growers Union (Coca is the main agricultural product of Bolivia) organized a protest March in the city of Sacaba, demanding the return of Morales. They went to the capital La Paz, where the seat of government. The police blocked their way, the violence began.

According to Bolivian media, in the evening killed nine protesters, dozens of people were injured. The next day the peasants who grow Coca leaves, began to block roads and supply food to major cities.

To deliver food in large cities such as La Paz, Sucre and Cochabamba, the government of Bolivia had through the air.

However, supporters of Morales seized oil refinery in Senate, resulting in company YPFB has stopped supplying petrol, diesel fuel and liquefied natural gas in the capital region. In the capital stopped coming by public transport.

The protests caused a shortage of food and fuel in major cities and huge queues near the shops and petrol stations. 23 people were killed in clashes.

To prevent the return of Morales

Soon, the Bolivian Council for the fight against drug trafficking, said that the protests are funded on drug money, and called Morales an international criminal. Then the Minister of the interior called for the arrest of the former President, since he, according to him, was directly in charge of the blockade of the Bolivian cities, giving appropriate instructions to the leader of the Bolivian Coca producers Faustino Ukrow.

“The evidence is obvious, we submitted them. Juan ramón Quintana [the former head of the presidential administration] said that he was going to turn Bolivia into Vietnam, and trying to do it, — said Murillo told reporters. — Evidence against Mr. Evo Morales — this video: on the record clearly audible as he calls for the killing of citizens and the siege of the city.”

The audio recording referred to by Arturo Morelli, Morales called fake. His opponents, meanwhile, blamed politics, not only in the blockade: Morales blamed for the fact that the protests escalated into violence. They also put a lot of pressure on Janine Agnes. The reaction of the authorities demonstrates their concern regarding the potential return of Morales to power.

Soon, the lower house of the Parliament of Bolivia adopted the law on General elections, which prohibits to run Evo Morales cancels its October victory and sets a deadline for the election of members of the Supreme electoral Tribunal.

In July, the Deputy Minister for the fight against corruption of Bolivia Guido Melgar accused Morales and another 16 members of the former government in the public procurement of ALV devices at inflated prices.

In June, during a pandemic coronavirus, Bolivian doctors said that the equipment does not meet the requirements of the who and unsuitable for use in intensive care. Later it became known that the government paid more than 20 thousand dollars for each of the 170 vehicles with factory price 7 243 USD. This caused protests among the local population, including universities, which was previously proposed to produce equipment at an average price of 1 thousand dollars.

Anyway, the protests and blockade of roads and factories after the resignation of the President showed that Morales still enjoys strong support among the peasant population.

Among those temporarily fulfilling duties of the President acts in such a way that is unlikely to cause the sympathy of the electorate Morales. The violent suppression of protests by his supporters could not end the division in society. Agnes quickly established a transitional government, which practically got the indigenous population (Aymara), but were well represented elite.

Morales as the first indigenous member of the post of the head of state, relied on the electorate. Sympathies among the indigenous peasant population contributed to the biography of a politician who was born in a poor peasant family, has not completed secondary education, was a farmer, loved to chew Coca leaves, protecting it as a national treasure.

And although by law he cannot run for office if Morales will retain such wide support among the indigenous population, Bolivia could again face protests and, quite possibly, a new change of government.