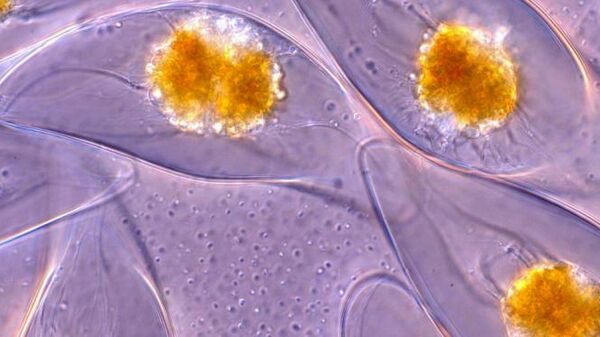 European physicists have found an explanation for the mechanism of bioluminescence of single-celled marine organisms, dinoflagellates that causes the mysterious glow of night waves. The study is published in the journal Physical Review Letters.

Scientists from Britain, Germany and France have shown that a unicellular organism Pyrocystis lunula produces a flash of light when its cell wall is deformed under the action of mechanical forces. The authors have developed experimental methods micromanipulation and high-speed imaging at the level of individual cells. By systematically changing parameters they found that the brightness of the flash depends on the depth of deformation and the speed with which it occurs.

Research reveals that a single-celled marine organism generates light in response to mechanical irritation caused by the viscoelastic response effect that occurs in materials such as liquids with suspensions of polymers. In the case of the dinoflagellates, this mechanism, according to scientists, most likely, is associated with ion channels are specialized proteins that are distributed on the cell membrane. When the membrane is loaded, these channels open, allowing calcium to move between cells, triggering a biochemical cascade that produces light.

“Despite decades of research in the field of biochemistry, the physical mechanism by which the flow of fluid triggers the production of light, remained unclear” — are in the press release of the University of Cambridge the words of head of research, Professor, Department of applied mathematics and theoretical physics Raymond Goldstein (Raymond Goldstein).

“Our results show the physical mechanism by which the flow of fluid triggers the production of light and how elegant may be making decisions at the level of a single cell,” says first author Dr. Mazyar Jalal (Maziyar Jalaal).

Scientists have found that the intensity of light is low, when compression of the cells is slow or when the deformation of the cell walls is small, no matter how fast is the compression. Bright luminescence is observed only when the amplitude and speed of mechanical action are great.

The authors developed a mathematical model that explains the observed data.

In the next step, the researchers plan to move on to the quantitative analysis of the distribution of forces between individual cells in the fluid stream.

Bioluminescence — the ability of living organisms to glow — known to biologists for a long time. The most famous example is the Firefly in the woods. This property is used by animals for protection, attack and attract partners for mating. Dinoflagellates use light to scare off predators.

The phenomenon caused in the surface layers of the water glowing organisms, is called the red sea. Every few years this glow on separate coasts is particularly bright, creating fantastic pictures. Recently, this phenomenon was observed off the coast of southern California.